Nothing much to report. The coach and the hessians are coming along but not really ready for pictures yet. Busy week at work, two weeks to go and then I am off for a fortnight, yippee.

Played a couple of games of Formula De at the club this week. 2 wins fron 2 races, best result for a looong time!

Help for Paul and coach WIP 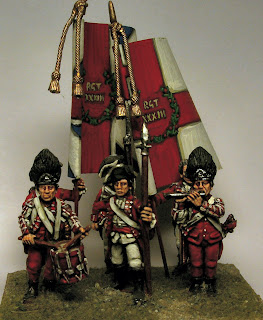 Here ya' go Paul. 33rd Foot musicians in all their glory.

Below, for the rest of us is my WIP on a 4-horse coach to add some class to the AWI. This uses parts from the MiniFigs 18th and 19th-Century kits. The chassis and coach body is 18th, while the driver's seat is 19th and I have used both pairs of large wheels from each kit to get that 4x4 look and to help it cope with the roads in C18th America. The HumVee of its day... 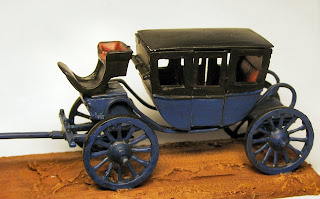 There is still a lot of painting to do on this, and the horses too. With the left-overs I should be able to knock up a cabriolet to have mouldering in a barn.
The kits go together pretty well considering the age of the moulds, shame they don't come with instructions! I had a few head-scratching moments and did initally glue the driver's seat in the wrong place.
..and I have just worked out that about 10 years separate the painting of the 33rd above from the hessians in the last blog entry. Overall I think I have managed to keep the style failr consistent depsite the time and the use now of GW washes.
Cheers

As promised, here are some pictures of the Hessians done so far. Above are the officers. The centre figure is from Foundry, a Prussian Freikorps figure sculpted by Mark Copplestone. The rest are all Perry. Below are the drummers and standard bearers and the bottom shot is of some firing musketeers. The latter need their overalls finishing off with some thined paint to smooth out the highlights.

Most of the shading has been achieved with GW washes.

This unit should be finished ina couple of weeks, depending on how things go.
Posted by Steve at 19:11 4 comments:

No pictures today but a quick catch up. The terrain is going nicely but is on a temporary halt while I wait for a thick layer of yacht varnish to dry off in the rivers and pond. This will need a further layer of gloss varnish but I'll give it a good week or so first.

The garage is being tidies to remove the worst debris from terrain building and to sort everything into boxes and onto shelves. I have cleared out a lot of old gubbins and invested in some new storage boxes. I'n not entirely happy with my second batch of trees so will revisit them at some point.

On the painting table are the von Bose Hessians. These are Perry miniatures and are a mix of firing, loading and charging figures very much like my British units. Some of the poses are a bit tricky to use - muskets a high porte etc and I am deciding exactly how many figures to paint. I like flags to be in the middle of a unit, so 4 stands doesn't work brilliantly. I'l probably do 3 stands of 6 figures each and two "bookend" stands of 3 figures to extend the frontage without needing to do so much painting. I did the same with the 71st Foot and it also allows for some diorama work on the bookends. After this are some more AWI British Generals.

Most of this week's spare time has been occupied with researching the 1780-81 campaigns in the South in order to write some scenarios for the little chaps to re-fight. This doesn't produce much visually appealing end results hence the lack of photos. I'll try to snap the hessians as a work-in-progress tonight as compensation!

The weekend didn't see much gaming stuff happening at all, but I did meet up with James Morris and Rob Broom. We chatted through our Partizan plans as James is revisiting his El-Cid collection for a demo game, I'm putting on my AWI effort and Rob is likely to be showcasing his Project X stuff (Scarab Miniatures). It was also good to meet up as families and see each others kids (the ultimate miniatures!). Hopefully we'll get together agin soon for some gaming.

So, I suppose that is it really. At some stage I must update the sidebar on this blog with useful links etc as it is looking a bit out of date now.

cheers
Posted by Steve at 13:12 No comments: 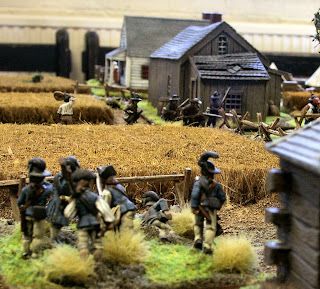 Just a few shots of some troops on the new terrain. Above some loyalists of dubious ability survey the enemy across a cornfield.

Below, the British advance cautiously across the river:

The British Legion and 17th Light Dragoons advance towards the militia lines: 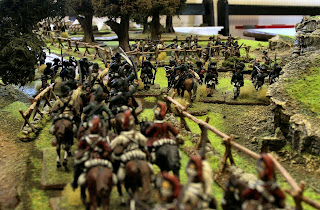 Someone has to tidy up afterwards... 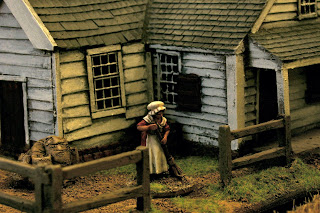 Apart from adding some traces with black cotton, I have finished the 4-wheel ammo waggon. Again, this has been painted in a neutral colour so it can serve on either side. I'm pleased to have this done as it was a Father's Day present. Another shot below:

I have used the second figure from the waggon pack to add to the wenches who normally stand outside the tavern: 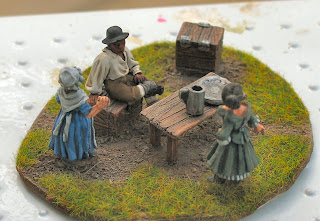 Next are a company of riflemen I painted up, making plenty of use of GW washes:

The terrain boards are progressing, but the pond still needs lots more varnish and the cliff board needs to dry out and have flock added. Photos in the week.
cheers

Round-up of the week

No spectacular terrain building this week, but I have been painting some figures and hope to get some photos up here by the end of the weekend. Its been too hot to do much else

I have finished off the painting and nearly finished the basing on the Perry civilians - just the flock to go.

Also on the table has been a pack of Perry riflemen to add to the existing collection. These have come out well with a white undercoat, thin paint and GW washes, followed by highlighting. These now need basing-up for use in games. I am about 1/3 of the way through painting the 4-wheel ammunition cart too.

The plan is to finally finish the von Bose regiment for Guilford CH next. These have languished semi-painted for a couple of years and really need to be completed, as does the basing on the 55th foot, who I originally started at least 6 years ago! They are painted and stuck to bases but the bases have never been finished off. These are Foundry figures so represent the regiment in the "Bunker Hill" phase of the war.

In the garage I do have two terrain boards nearly ready for a coat of "rustic brown" so I'll do that tonight or tomorrow. If the weather is good over the weekend these may progress further. Before painting I just need to glue some rubble/gravel to the bottom of the cliff/escarpment to blend it in better. A simple wall of cork bark lacks a degree of naturalism...

It might then be time to order some new figures (shhh about the hundreds of unpainted foundry uniformed militia in the garage - I'll get round to them) as I need to revamp my British collection to better reflect their dress in the South at the end of the war. Perry are the obvious candidates but Warlord Games promise an announcement of two new plastic periods this weekend, so it may be worth hanging back and seeing what emerges. Plastic AWI in campaign dress would be VERY useful.

cheers
Steve
Posted by Steve at 11:58 No comments: