I thought I'd actually test out the game today so played through about 10 turns which allowed for the grenadiers and light infantry to have their initial assaults repulsed.
The British deploy: 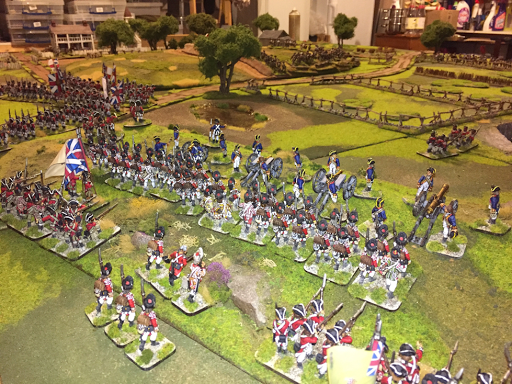 After moving out they look far more stretched: 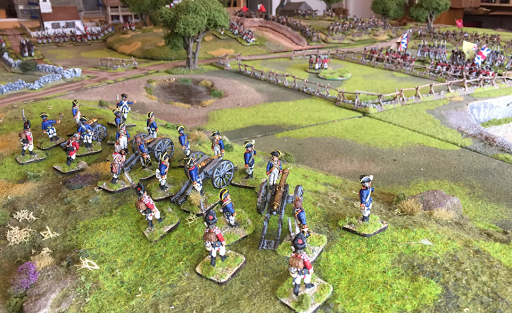 After 10 turns the light infantry have taken huge losses on the beach and the grenadiers aren't faring much better:

The grenadiers falling back to regroup: 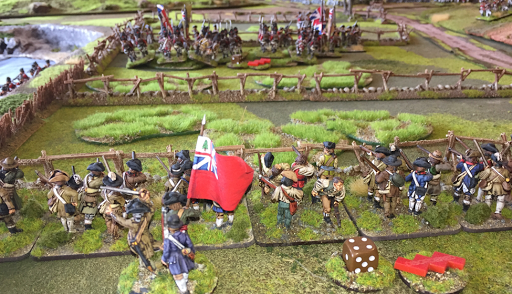 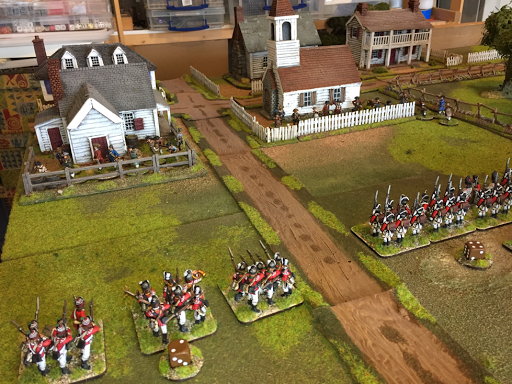 Pigot moved three battalions up towards the redoubt and breastwork:

A "miniaturised" view of the defenders:

That's all of the action for now.
Having done more research into this battle and created the scenery with as much care as I can, the end result is a much more interesting scenario than my previous experiences with "Bunker Hill" on the tabletop.
Posted by Steve at 12:46 7 comments:

I have spent time refining the game set up. The actual demo game will have more lichen and scatter on the table to blend items together but I think I'm getting 'there'.
Views from behind the colonial lines: 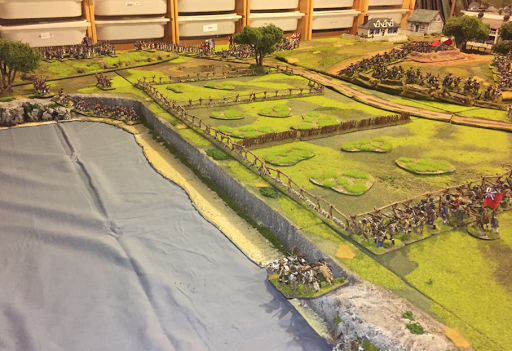 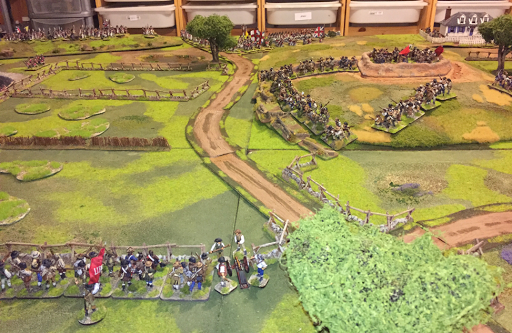 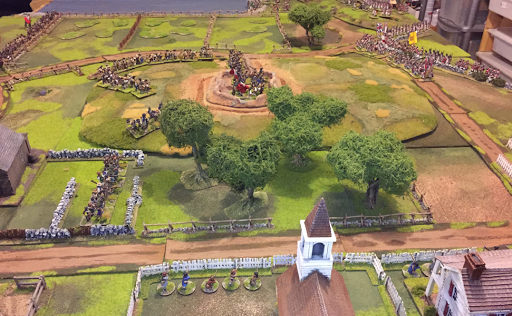 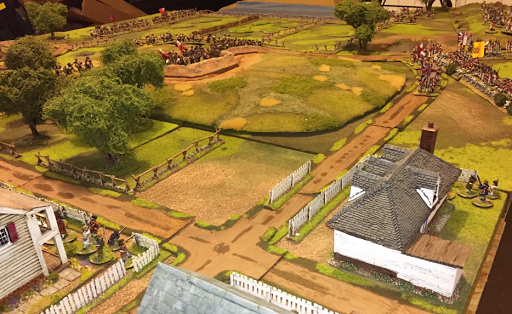 The left wing of the Crown army moves into place: 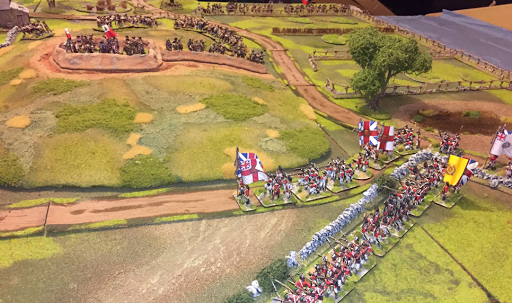 The right wing looks on from Moulton's Hill: 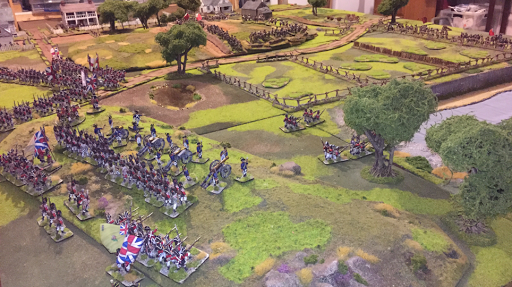 Helicopter view of the defences on Breed's Hill. 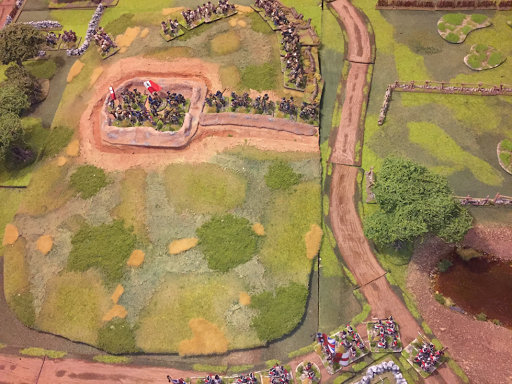 Currently I have not modelled the 'fleches' as the more I look the more it seems there is little in the way of evidence to support their existence. I have given the defenders a log barricade instead, reasoning that they might have dismantled fences but probably would not have constructed anything especially sophisticated.
There's still time to change my mind though. 😀
Posted by Steve at 19:27 5 comments:

On Friday I managed to get the current Breed's Hill collection onto a 6x8 table to begin optimising things for the demo game. The basic set up is shown in the first photo. The Mystic river is in the foreground with Charlestown in the distance. Breed's Hill is in the middle with two red flags flying in the redoubt.
A few things will change. The crops will be replaced by long meadow grass I think and the exact buildings/layout of the outskirts of Charlestown might be tweaked. There will be more militia, more fences and some stone walls but overall the layout "works". 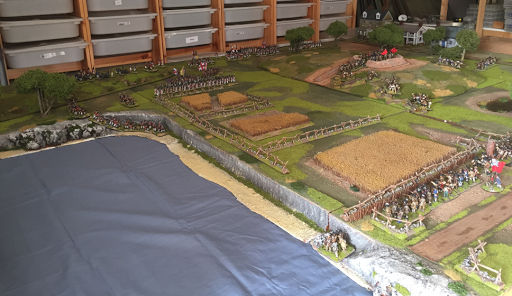 Here is a closer view of the redoubt and breastwork. The fleches need further work.

A view along the British line. 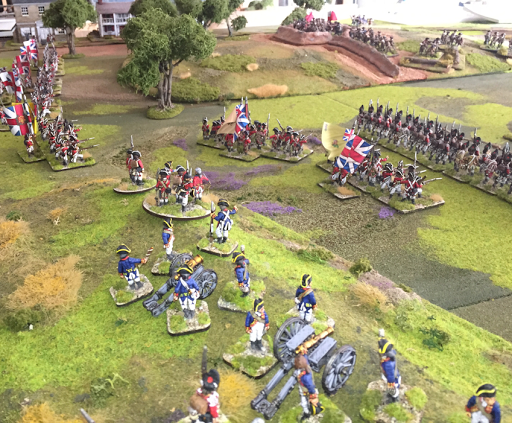 Yesterday I popped along to the Hammerhead show. I picked up some 6mm grass sheet from which I have made the following patches of long grass to use as meadow: 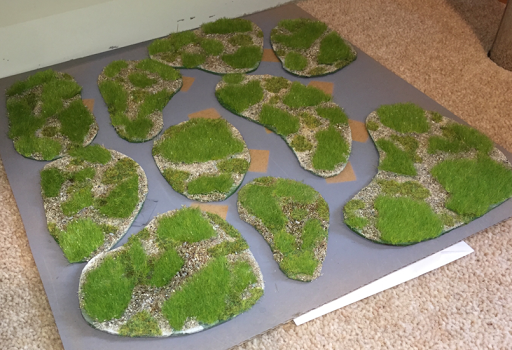 I also bought a small pond from The Last Valley, and gave it the same "treatment". 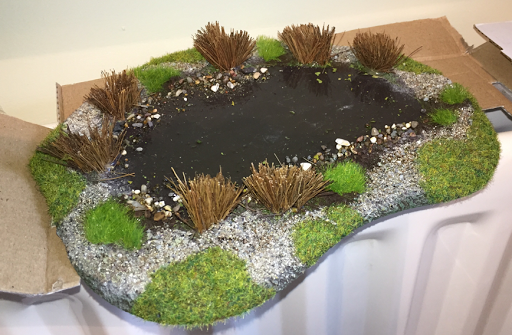 Lastly I bought another artillery crew in shirtsleeves and a blister of northern militia; both from Perry Miniatures. These have received a coat of Vallejo light grey primer and will be painted over the coming week.

I think the demo game should be ready well in time for Cannon so I hope to see some of you there on 2nd April or at Partizan in May.
Posted by Steve at 12:35 7 comments: