Well, I have not been feeling the love for painting medieval infantry so they are on the back-burner for a while.

After Christmas I'll be cracking on with the planned Guilford Courthouse game for Salute. I need to reorganise and supplement the militia as well as finish painting a couple of buildings.

In the meantime I fancied some fairly low-effort WW2 gaming. As it would take far too long to train an opponent for ASL (Advanced Squad Leader) I wondered about using the components and the basics of the rules but combining them with the activation mechanism for Chain of Command from Too Fat Lardies to give me a quick and easy platoon-level game. 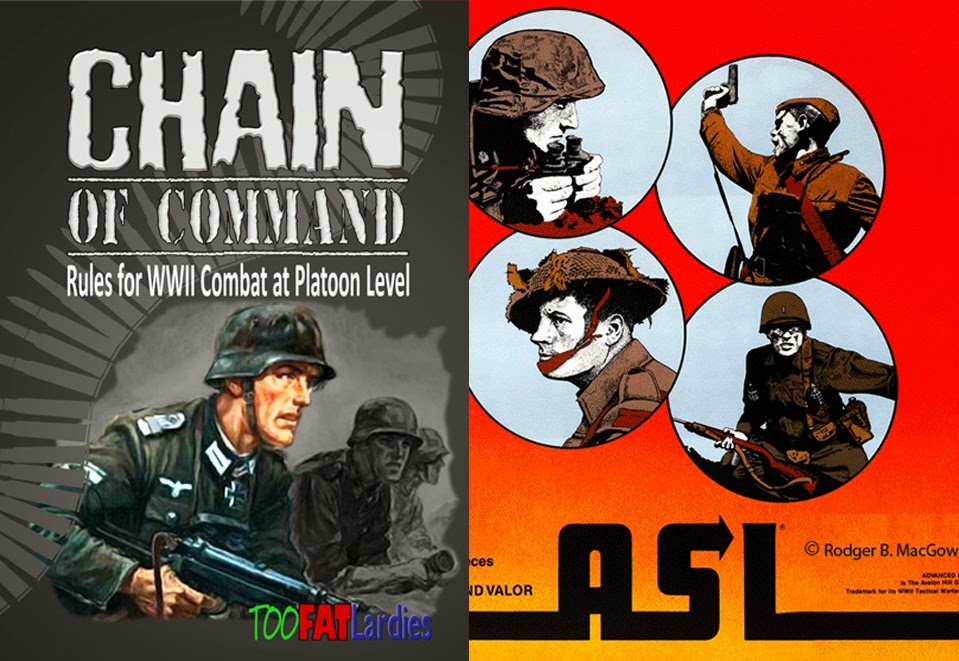 All in all, it seems to work. I played the "Patrol" scenario from CoC using half of ASL board 6 and two platoons following the recommended OOB from CoC. Sections were represented using one squad counter as the riflemen and one half-squad counter with a LMG and the, err...LMG team. Each section was accompanied by a 7-0 leader and the platoon commanded by a 9-1 or 9-2 leader, possibly assisted by a 8-1 platoon sergeant. Anti-tank teams were represented by a half-squad with the recommended weapon and mortars were crewed by a crew counter. I pitted a 1944 German platoon against a 1944 British platoon. So extra supports were used.

Deployment from jump-off points was permitted within 2 hexes for regular troops (1 for green and 3 for elite) and the actions allowed were as per CoC depending on the action dice rolled.

I played a number of phases, but there were not enough 6s rolled to change to a new game turn. I chose to leave desperation morale (DM) markers in place, only being removed if the game turn changed. Not sure about this; needs more testing. Leaders were allowed to attempt self-rally if activated by the relevant "3" or "4" action die and if successful could attempt to rally subordinates/teams in the same hex.

Senior leaders were allowed to activated adjacent hexes at the same time to create opportunities for greater firepower, otherwise firing was by one hex at a time, with a staking limit of two teams per hex (and any number of leaders).

The fairly vanilla set-up gave a pretty straightforward game. The British got the jump on the Germans due to a fortunate first set of action dice allowing them to deploy all three sections immediately and grab some good positions. The British platoon mortar also proved helpful; dropping some HE on Germans in some woods and taking out a section.

Next time I'll add in some support options and see how it goes, maybe even an armoured car or other light vehicle. The good thing with using my old ASL collection is that I have a LOT of stuff to choose from.