In light of the recent bicentennial I took a brief sojourn into the 1815 campaign.

I bought the boardgame shown below, over 20 years ago but have seldom played it. The rules are detailed and make for a slow, if 'complete' experience. 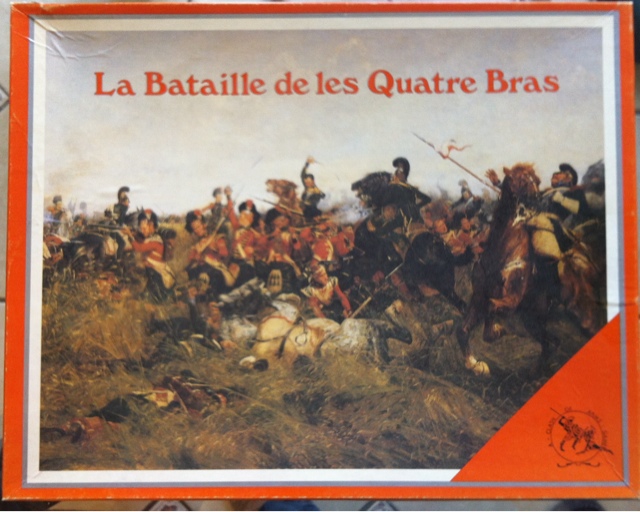 I thought I'd try to speed things up by using the Black Powder miniatures rules to run the game.

Some adaptations were needed to harmonise the map, counters and rules.

I hex was assumed equivalent to 3" making the map the same as a 10'x6' table or thereabouts.

Counter strength was used for hand to hand, half of this (rounded up) did for shooting and stamina. Morale values were taken from the Albion Triumphant supplement for BP.

As per the boardgame rules, column was shown by a counter facing a hex side and line by facing a vertex. Movement rates were half the amount shown on the counters.

I changed the disorder rule a bit; instead of 6s from shooting causing disorder they instead cause the target unit to take a break test if there are any subsequent unsaved hits. It seemed to work well, and units forced to fall back still become disordered. I might keep this change for figure gaming too.

Below is the initial disposition. Two allied brigades oppose Pire's light cavalry while the French 5th Division emerges from Frasnes: 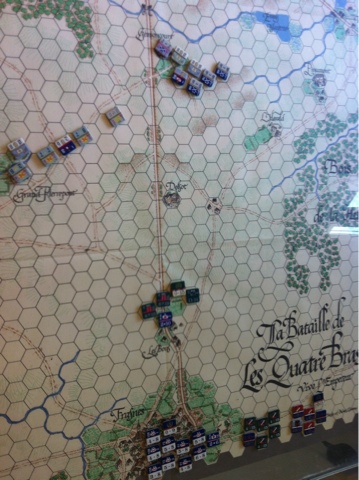 5th Division advances while Pire works around the eastern flank: 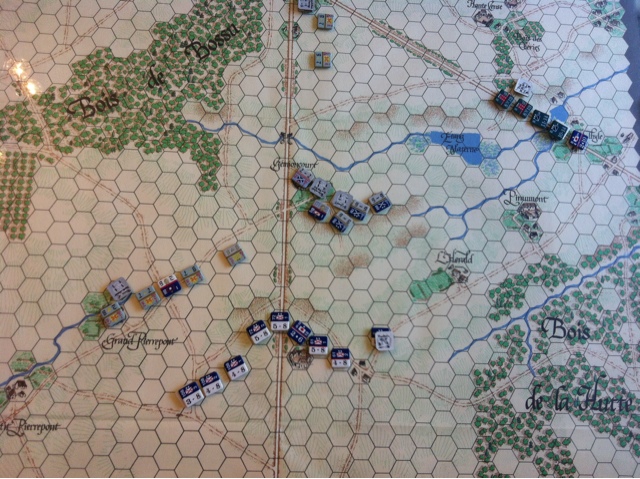 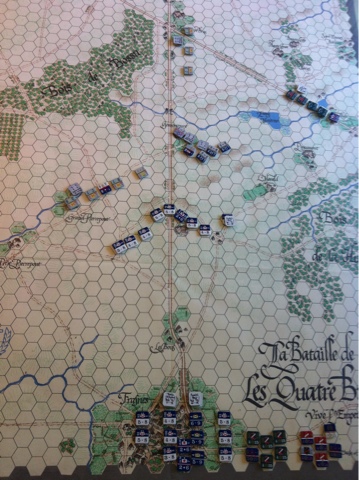 ...and moves up to the right while 5th continues to build pressure and Pire pins the defenders of the crossroads in squares. 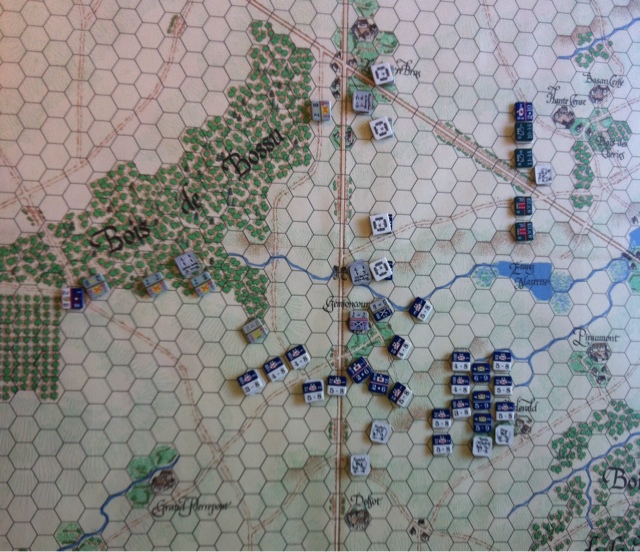 At this point the rest of French II corps was due to arrive along with lead elements of the British army. I stopped at this stage. The French had really not pushed hard enough but the rules seem to work well and fast. I think I could play the game on a day against an opponent.

Fusiliers on order so need to make room on the painting desk :-)
Posted by Steve at 20:08 No comments:

After a few further turns here is how the battle ended.
On the British left a see-saw afternoon saw attack and counter-attack. The newly arriving continentals were driven off at the point of the bayonet but a spirited charge by some of Morgan's riflemen neutralised the artillery. Morgan's men held their original positions but the retreat of the continentals left them too isolated to stand alone indefinately.

On the British right there was a similar picture. Again the collapse of the rebel centre due to multiple retreats, broke the stalemate. 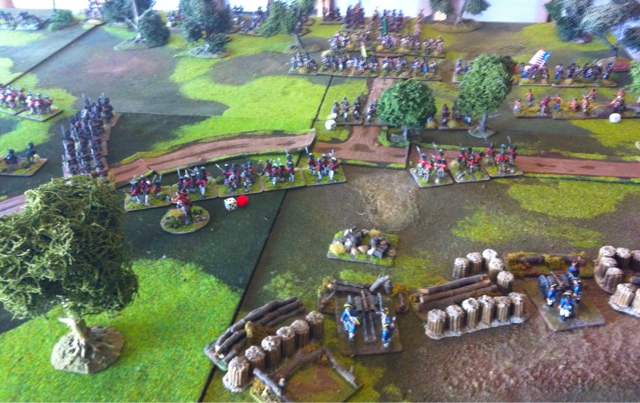 While they still had sufficient troops to form a strong rearguard the rebels decided to pull back for now. Losses had been mostly light with only a couple of units taking severe punishment, so they will be able to resume the fray after a day or two.
This proved a good game and my rules worked well. Most of the regulars on each side were rated as "veteran" (1st line) with a few elites. This is different to the southern battles of 1780-81 where the British usually have the edge in quality. Noticeably this resulted in the battle developing into prolonged musketry duels with less opportunity for bayonet charges. Still, when charges happened they often had significant results. This shows the value of having fresh reserves and committing them at the right time.
Cheers!
Posted by Steve at 16:52 No comments:

Back to the garage...
Time has moved on a little. Here is a shot up the line from the British left. A clearer battle line is forming with the two sides exchanging volleys. The redcoats seem to be slightly gaining the upper-hand now that the elite troops on the right are coming into action. The two sections of artillery on the left are proving useful too. 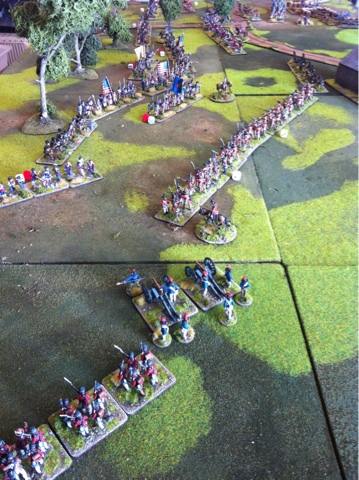 Moving along the rebel line from left wing to right:
The left- wing troops have taken hits and been forced back. The Indians have moved back into the woods and the British light infantry companies are adding to the pressure. 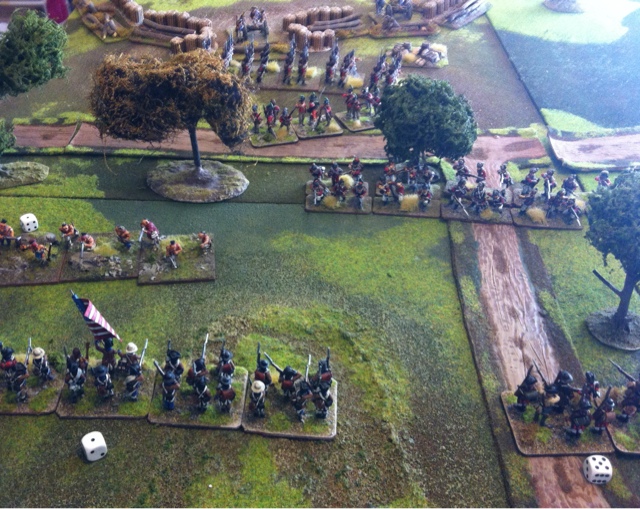 More of the left wing. The brown coated regiment has taken five hits and really needs some urgent rallying before the redcoats catch up. 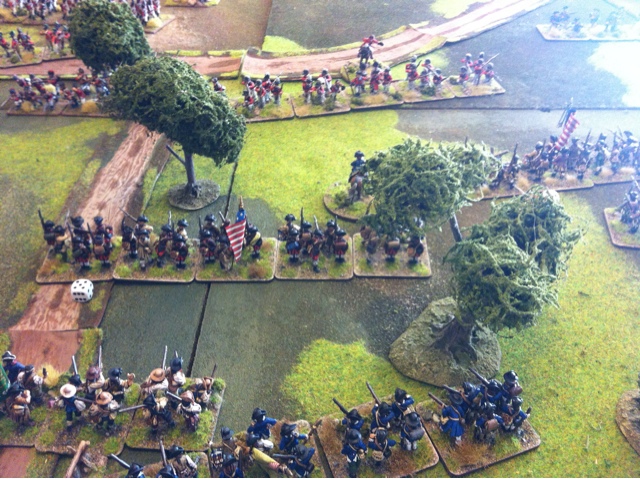 In the centre the newly arrived brigade has manoevered in to place but has already started to accumulate casualties and disruption. 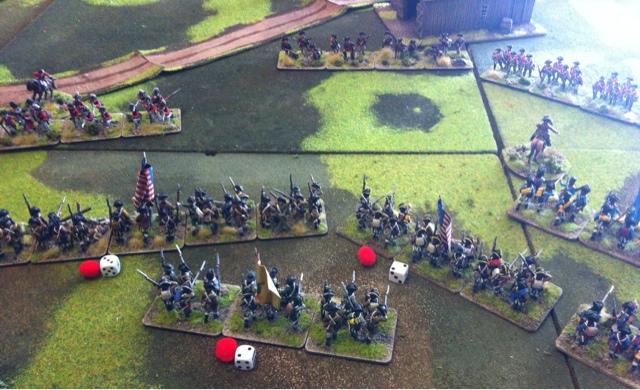 Morgan's brigade still holds the right with high quality light troops. Out of picture the British artillery are creeping closer but the highlanders have fallen back. (See the first picture). This may be an opportunity for Morgan to counterattack! 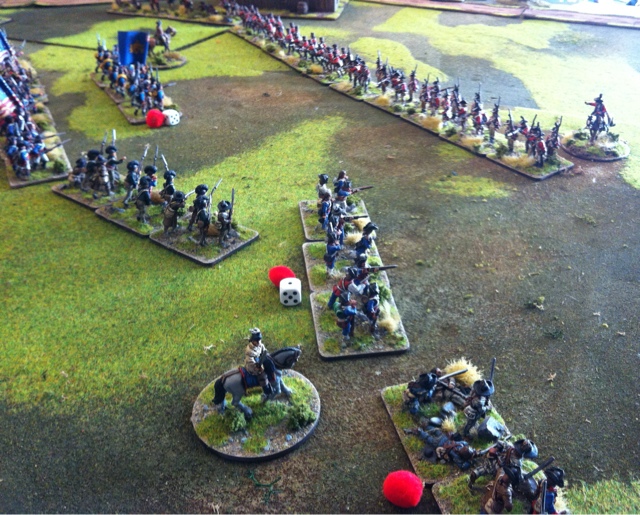 How I paint soldiers (3)

Hands and Faces to finish.
The first step is a highlight with Humbrol flesh. 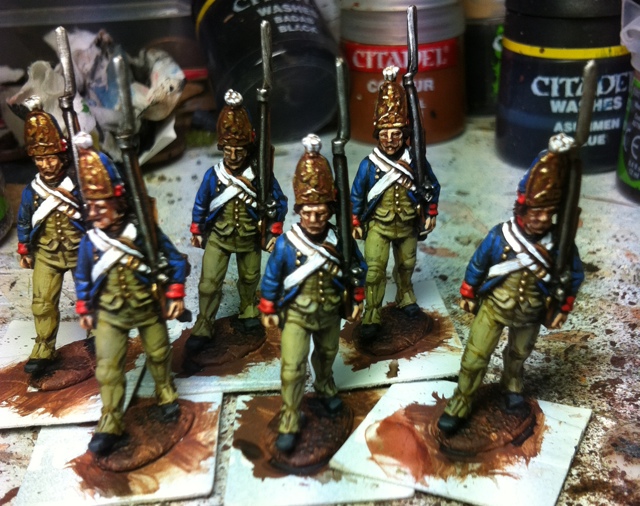 This was trickier than normal because of the moustaches and some slightly rough casting. To smooth things I popped on another quick wash of flesh shade: 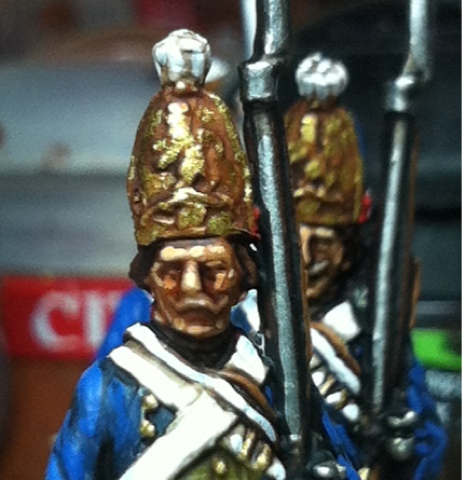 Then re highlighted and put some highlights on the moustaches with army painter leather brown: 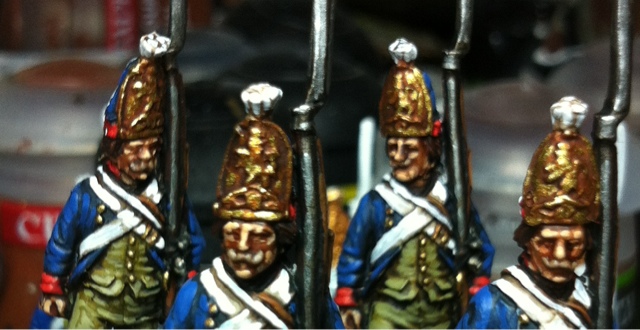 Here's a photo of the finished 6 figures 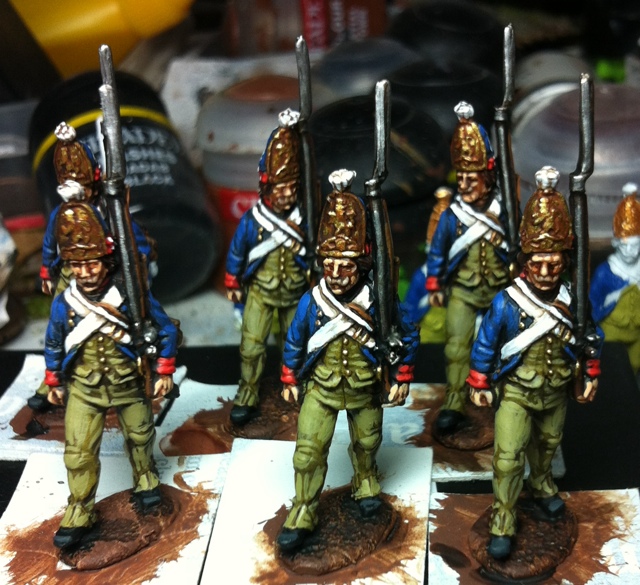 Now to start the next batch of 6. I'm aiming for a unit of 30 figures plus two seperate standard bearers.
Posted by Steve at 20:26 4 comments:

How I paint soldiers (2) 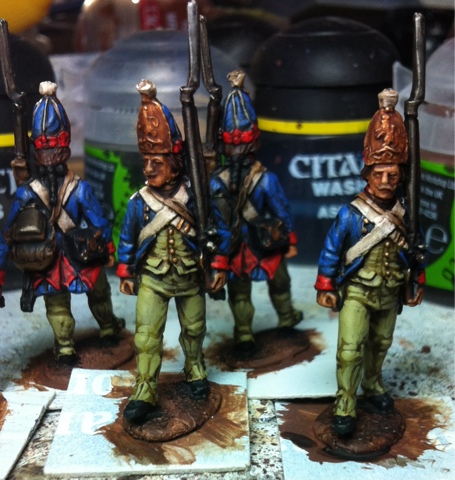 As the mitres are such a defining part of these models the brass gets two highlights. First is army painter greedy gold: 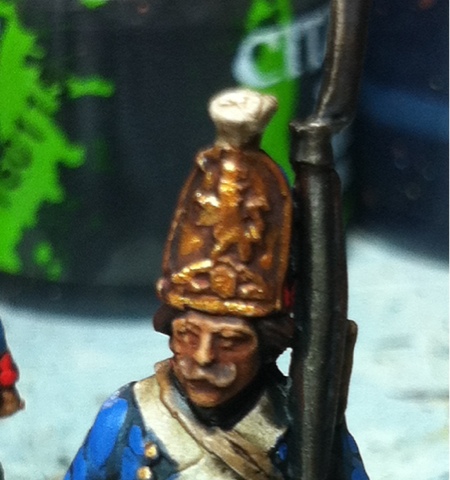 Then a folk art pale gold (or mix in silver to the previous paint): 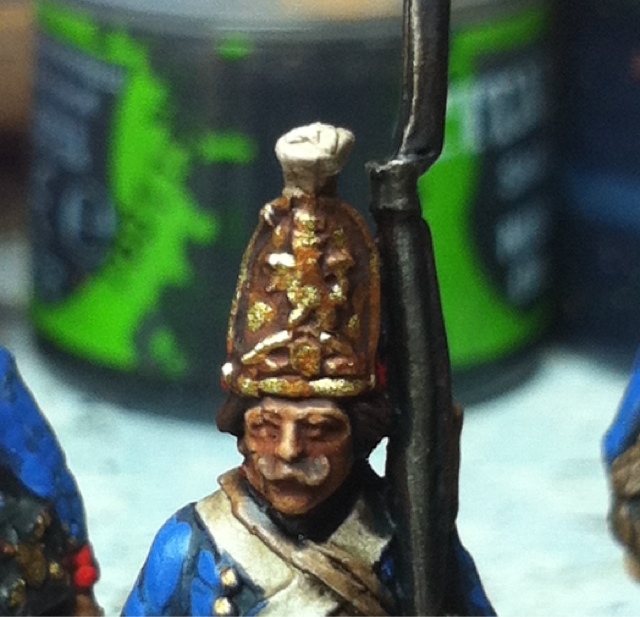 Lastly for today I highlighted the rest of the figure: belts, musket, etc 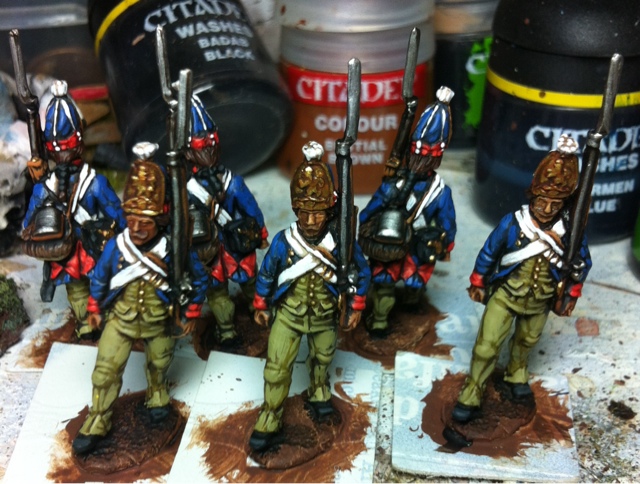 I've had a few requests to demonstrate my painting technique.
It's pretty simple so here is part 1
A. Block painting over a pale undercoat, white in this case: 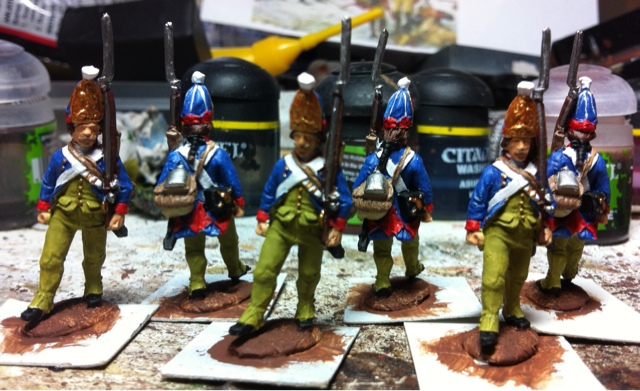 B. Wash with Army Painter strong tone ink (or GW Devlan Mud if you have some left): 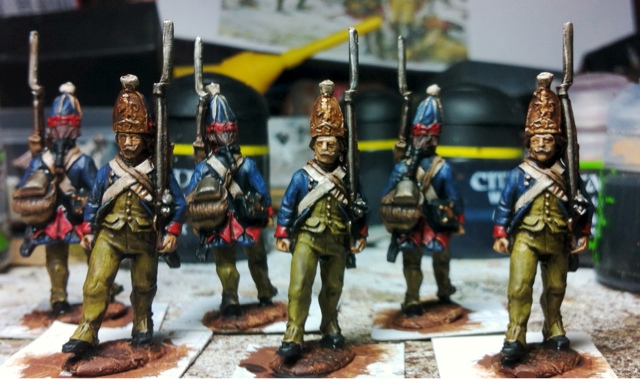 C. Second wash of black (GW nuln oil) on the musket, canteen and fur haversack and a second wash of GW reikland flesh shade on the skin and brass mitre front. 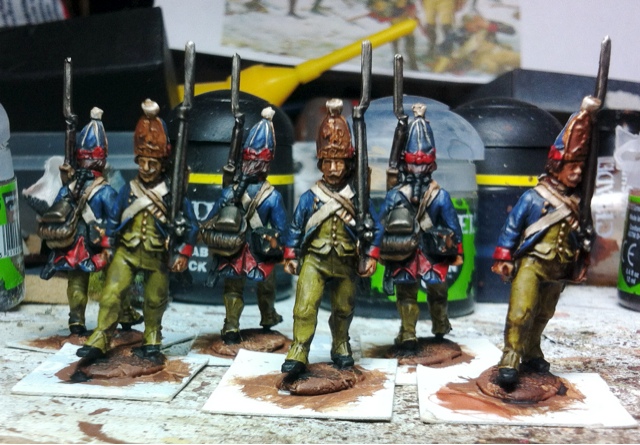 Next time I'll start painting in the detail.
Posted by Steve at 22:09 2 comments: