I've finally got back to a regular painting routine and have started cranking out more Austrians. Here is the output from the last couple of weeks:

and a close-up of some of the infantry (IR#20) with orange facings.

These troops and some more that I have in progress will form the Austrian III Korps at Wagram. I already have the advanced guard finished, so I need to paint up about 100 more infantry and some artillery before moving on to the next formation.
cheers

Here are some photos from another battle generated by my PBeM campaign set in a fictional 1809. This battle saw a rearguard action by 2 divisions of Austrian infantry, hoping for cavalry reinforcements, being attacked by 3 divisions of french infantry, a division of Bavarians and a dragoon division.

The French were attacking from the West, which is the bottom on the picture below. They initially had to cross the river, which the Austrians elected to leave undefended fir the sake of making a quicker getaway. The first picture shows the action a few hours into the battle. The French have managed to finally get all their forces over the river and deploy them, but in the meantime the Austrians have managed to pull back a long way and are heading for the high ground to the East. 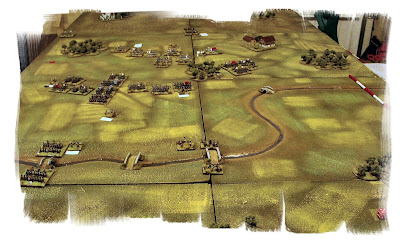 Picture 2 is a close-up of the front lines

and the final shot is taken towards the end of the battle. After about 12 hours hard fighting the Austrians had fallen back some 4 to 5 miles and managed to establish a position on the hill. The heavy cavalry had arrived and threatened the French right, destroying one infantry regiment before pulling back to assist the withdrawal.

All-in-all a successful rearguard action by the Austrians, albeit hard pressed by the French. This one showed that the chaps in white are no pushovers.
cheers

This is the battle arising from our campaign, that we fought out this week at the club. Three stages of the battle are shown.

First is the position at the start of the battle at 2.30pm. A corps of three french divisions is attacking the town of Konigstat, which is defended by two strong divisions of Austrian infantry.

The french plan was for their right-hand (better quality) division and the corps reserve artillery to deal with the Austrian left flank, while the other two divisions concentrated on the other flank. The french commander opted to leave the town alone for now. 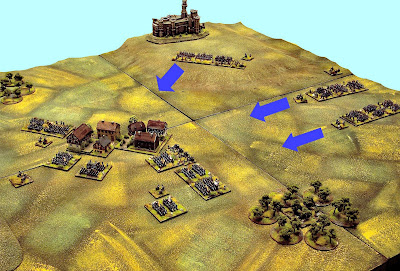 By 5pm the initial french attack on its left flank had been repulsed and was getting reorganised with the shaken division being covered by its colleagues in case of an Austrian counterattack. The french infantry on the right was slowly and steadily rumbling towards the Austrian left. 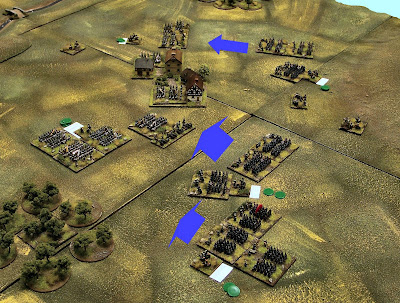 The battle was all over by 9pm. The french attack had gone largely to plan and their right-hand division had swept round behind the town to cut the Austrians off from the bridge over the river. The Austrian commander decided to evacuate the town and break northwards to escape. At this point the french lost a bit of their impetus and decided it was best to consolidate their position than risk an exhausting infantry pursuit at night. 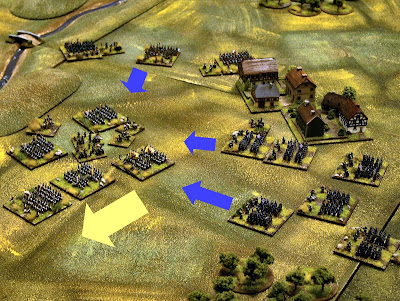 All in all a satisfying win for the french. On reflection I think the Austrians could perhaps have had more success by placing some defenders in the town but placing the bulk of their force behind it, forcing the french to either attack the town or bypass it, leaving an Austrian bastion in their rear. On the other hand, the Austrians had chosen to defend a strategically unimportant town with their backs to a river, so perhaps just had themselves to blame...
The game played nicely, and we were all done in about 2 hours including setting up and describing the scenario to the interested bystanders. Roll on next time!
cheers!

Well, October was a rubbish month on the painting front. I only got a few bases of Austrians finished. I think the roube comes from having enough stuff now to fight club-sized games. This takes away the motivation to expand the armies further. Hopefully I can buckle down and get more done in November.

I have not been idle though! As well as finishing the extra terrain boards I have been running a play-by-email (PBeM) 1809 campaign for a few friends, set in a fictional south-Austrian valley. This has only been going for about a week, but it generated a battle that we fought out at the club this Wednesday and a larger scrap is just brewing elsewhere on the map. I took c acouple of photos of the on-table action and if they cope out alright, I'll post them later.

Once the campaign is finished I'll provide a more complete report and I'll put some supporting materials on the paintingshed yahoogroup.

You might also notice that I have used blogspots new "reactions" feature. This has nothing to do with Sepcsavers of sunglasses, but is a way for you to let me know if blog articles are helpful or interesting and to indicate if you'd like more information on the subject. Please continue to leave comments too - it is nice to know there are people out there actually reading this gibberish.