So where am I?

I have painted and based all of those hussars (3 bases) , to go with three bases of infantry and a mixed base of lancers and jagers to become the advanced guard for III Korps. These bases have the sand glued on but still need the ink/drybrush/static grass finishing off.

On the painting table there are 4 bases of artillery (8 guns and crew) The plan being to finish the painting of these by the end of the week, finish all the outstanding basework over the weekend and then get on with the French from next week. I might ease into the French by starting with the Italian Guards - one mixed base of elite infantry and cavalry.

The other job for the weekend is to ctalogue my existing bases and produce a worklist of stuff still outstanding.

I would still like to get 3-4 more Austrian infantry bases done before Salute but I'll need to see how time goes. The alternative is to give the existing bases some extra hit points within the rules and say they represent 3,000 rather than 2,500 troops. No point getting to distressed about things.
Lastly, here is the terrain board representing the top of Lobau island where the Danube curves around. The pontoon bridges are from Heroics and Ros. The next step here is to get some of the bridge sections and mount them on model trestles to represent the other temporary bridges constructed by the French 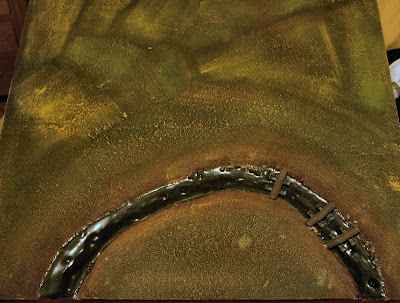 The King's regulars are progressing nicely, although they are only about 50% of the way to completion: 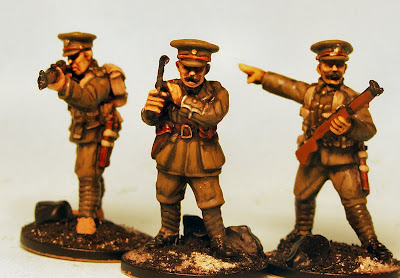 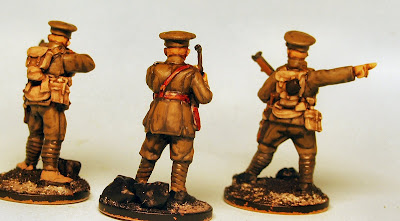 I've nearly finished the Austrian Hussars for Wagram. On Wednesday we gave the new command rules a go and they seemed to work very well.

The hussars are coming along nicely, but here are some shots of the progress on the 28mm 1938 English Civil War project. Lots still to do, but the figures paint up really well. They are a bit darker in reality than the photo shows, but these are just quick snaps.

cheers
Posted by Steve at 12:05 No comments: 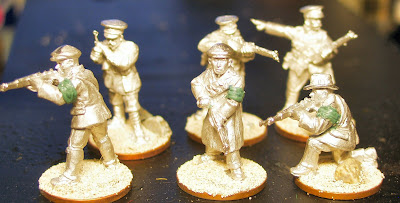 As if I wasn;t busy enough, I'm embarking on a little skirmish project based around the current "buzz" period of a hypothetical English Civil War in 1938 following the non-abdication of Edward VIII. The figures above will form a royalist patrol made up of regulars and royalist civilians. I have added armbands to the civilians using greenstuff putty. These will be used to help distinguish factions as it is likely that there will be civilian/militia on both sides.

In my hypothetical world they will be based around the Newark area and will engage their Parliamentarian foes who are based in Grantham.

The figures are by Musketeer from their Irish Wars of Independence range. For the parliamentarians I'm planning on adapting "Black & Tans" from the same range. Rules will be probably based on Necromunda/Mordheim to keep things simple. Now I just need to find some nice model buildings!
Posted by Steve at 16:59 3 comments:

Lots on the painting table at the moment, but here is the latest finished base. Line infantry in front with lower Austrian landwehr behind, still forming up as some troops march through a gap in the fence. 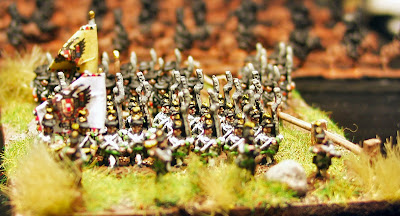 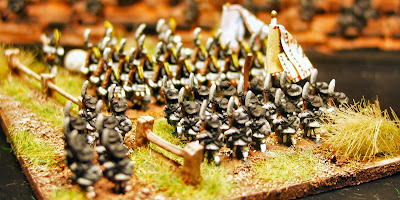 In the photo background you can see the ranks of Austrian Hussars still to be painted. Hope to get these done (3 bases) by next Friday.
cheers

I have put a copy of my Wagram OOB in the files section of the yahoogroup that accompanies this blog (link in the list on the right of the screen).

cheers
Posted by Steve at 16:00 No comments: