My order from Essex miniatures arrived early on Saturday morning and this meant I could get down to a good session of sorting figures out and gluing them to lolly sticks, ready for painting. I managed to get everything done that I wanted to undercoat and to apply a nice coat of white primer in the afternoon, along with helping the kids with their homework.

I am going for a white undercoat and army painter strong tone to finish, in the hope this will make for a fairly fast production line. As an experiment I have completed the block painting of my Pyrrhic elephants and am now waiting for the army painter to dry over the next few days. This will let me know if the colours O have chosen as the "theme" for the army look OK, or if they are too dark.

The Pyrrhic army is currently intended to have a main colour of burgandy with plenty of yellow bits + pieces and the occasional flash of purple on the commanders. Pturges etc will mainly be in white.

This weekend took me back to my 20s when I lived in Essex and would often pop down to Canvey Island to pick up my Essex miniatures fresh from the mould and spend weekends getting them fit for the table. This is looking like being something of a retro year!

Pics of the elephants next weekend IF they look OK :-)

Don't panic, I haven't received and painted a Pyrrhic army in the last few days! At the club tonight Luarence and I decided to play a regular DBA game rather than emark on a BBDBA bash as it was so long since we last rolled the rules out.

I took along a few boxes of my assorted 15mm ancients and we decided on making up a Pyrrhic army from some Successor bits & pieces. To oppose this, a brief galnce at the possible enemies came up with Spartans (list II/33c).

The battle was a little chaotic, reflecting our lack of practice. Initially I managed to create pressure despite having little in the way of a plan, but much of the Pyrrhic army was able to recoil or flee from my slow moving spears and in the end my disorgansied army succumbed to its opposition. Despite the loss I had a great time and will be proceeding with my plan to play a lot more DBA and BBDBA during 2011!

Lessons from today are to get much more familiar with the combat factors, rear support bonuses and "quick kill" opportunities of the various element types. I used to be very familiar with these, but some have changed and I have obviously become a little rusty.

I'll report on progress on Sunday!

Hi all, It is Sunday so I am posting again as promised!

I have been away for a long weekend which, among other things, gave me a chance to finalise my ideas about those new BBDBA armies. I have decided to go for a matched pair of Pyrrhic and Camillan Roman. This gives me the pike army I was looking for, which can be morphed into a number of other armies by slightly altering the troop mix. The Camillan Romans are a nice mix, but not as Blade heavy as the roman armies that follow it. It is a simple job to convert it to a Polybian Roman army though and the pair of armies have plenty of potential to take on lots of opponents.

The order went in to Essex Miniatures so should arrive next week in time for the first paint to go on next weekend!

I have also ordered a couple of packs of Gallic chieftans to try and finish of my Gauls to BBDBA standards.

In the meantime, the Middle Imperial Romans will get an outing on Wednesday.

cheers
Steve
Posted by Steve at 17:02 No comments:

Hi all, 2011 is here with bags of wargaming potential. I am still ploughing on with a couple of things that limit my painting and blogging time, but I'm going to try to keep some time free on Sundays to get some kind of blog entry done and maybe paint a few figures.


In an effort to get some simple, hassle-free gaming done at the club on Wednesdays I am going a bit retro with some Big Battle DBA. Despite WAB's arrival on (and departure from?) the popular scene I still think that BBDBA gives a better game if you want to fill an hour or two in an evening. While we do have the ancients version of Black Powder on the horizon I am not sure this really offers me anything more than DBA already does - and it will probably need more figures. There is something nice about simply picking up one small box after work that has my 36-element army, the small DBA rule book, a camp, a few dice and my measuring stick. It is real low-pressure gaming, not needing bulky scenery.

My main army at present is Middle Imperial Roman, which I assembled a few years a go for a club project using Essex Miniatures figures. Essex are my preferred choice for most ancients, they are a bit stylised but they maint up really easily. The exception is hoplites for which I use chariot miniatures (but their horses are very weedy). I also have plenty of hoplite greeks, numidians and enough Gauls to more-or-less make a BBDBA force. As Essex miniatures have extended their 3-for-2 offer on DBA armies I might also pick up a new army by the end of the month - but lets stick to the Romans first!

I thought I'd pop up a few pictures of the army I use. Here are the three generals. All count as cavalry (Cv) and the chap on the white horse acts as the commander-in-chief while the other two are his subordinates.

Next come the cataphracts, or "knights" in the rules (Kn). The provide some hitting power when I am up against armies with lots of mounted troops.

On occasions where cataphracts might not be the ideal thing, the DBA list allow for cavalry (Cv) to be taken as an option. Here are to ones I use on these (rare) occasions. They are actually from an Early Imperial army that I have, but they do the job. If I use them, I ignore the fact that one stand has a commander on it - all cound simply as cavalry.

Next are the light horse (LH) that provide a bit of screening for the army and can move quickly to get around enemy flanks and rear.

With the mounted arm out of the way, let's turn to the footsloggers. Below are the lighter elements fof legionaries, or "blades" (Bd).

...and here are the rest of the legionnaries, also Bd but these have 4 figures per element so don't recail quite so far if they lose a combat round.

The legionnaries work closely with the auxilia (Ax) troops, who are a lighter infatry and act to either screen the heavy infatry or to operate in any useful woods or other rough going. Only 6 elements are pictures here. I use some Early Imperial auxilia to make up the numbers but I will get round to those remaining elements some time! 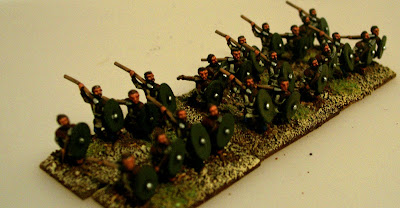 The last type of infantry I have in the army are the Bowmen (Bw). As this is an eastern army my bowmen are dressed appropriately:

Under the army list I could replace the artillery with more Light Horse and the Bows could be replaced with either Psiloi (Ps) skirmishers or more Auxilia but I have found the current combination to be quite effective when taking on John's Late Imperial Romans and Laurence's army of Parthians (I think) with some Arab allies. The latter combination is a bit of a toughie as is mainly Knights and Light Horse with just enough allied infantry to get in the way! My normal tactic is to form a fighting command of my own Knights and Light Horse, backed up with some cannon-fodder Auxilia - with the aim of outfighting the enemy on one flank while the remainder of the army cautiously advances, taking advantage of any available terrain. The major risks are that the enemy Knights can go through both the Auxilia and the Blades in short order and can wrap-up the roman army pretty comprehensively. This makes the majority of the roman army as much of a liability as a strength, unless there is a lot of woodland around. The artillery can occasionally give the enemy knights a shock and at least the enemy Light Horse tend to bounce-off in combat so long as my flanks are secure.
With some DBA action I am good to go with plenty of existing stuff, so no extra preparation is needed. If I branch out then I am currently tempted to go for some kind of successor force as pike armies are something I haven't done much with in the past. With only 36 elements needed to produce a complete army this seems a manageable target. After a few years of 6mm and 28mm projects I'm quite looking forward to some 15mm figures.

Plans at the moment are to kick off with a game on Wednesday week.
Cheers!
Posted by Steve at 19:56 4 comments: