Here is a report of yesterday's battle to accompany the photos in my previous post.
The Battlefield:
The battlefield was an 8'x6' board with the Reedy Fork Creek winding its way from the north west to the south east corners. There were three fords; the western ford just as the creek entered the table and the horse ford just as it left with the main ford about 2/3 of the way from the former to the latter.
The main road entered at the south west corner where it passed through an extensive wood including a ridge, before dividing. These two roads crossed the main and horse fords before heading to the north east where they again met up. South of the creek were the aforementioned woods and a hill overlooking an open area of pasture towards the main ford. On the north side of the creek were further areas of woods. North of the main ford two hills flanked the exit from the creek and the defence was further enhanced by a small house. Adjacent to the horse ford stood Weitzell's Mill itself and north of this was Weitzell's farm.
Deployment:
The rebels deployed their regular infantry of continentals and Lee's Legion north of the creek on the two hills. They were supported by Campbell's 60 riflemen.
The horse ford was defended by a unit comprised of assorted militia companies.
Colonel Preston commanded his own rifle battalion and other detachments of similar infantry to form a rearguard on the wooded ridge to the south west. In the pasture beyond the wood; south of the main ford were the dragoons of Lee and William Washington.
The Battle.
The Crown forces entered from the south west forming a first line of the 33rd, 23rd and Jagers to engage Preston's rearguard. The Von Bose and 1/71st acted in support while tarleton's dragoons awaited events and artillery slowly moved-up.
The fight for the ridge was eventful with the jagers breaking and the 23rd Fusiliers taking significant losses before the line of riflemen gave way. The 33rd and Tarleton's dragoons poured through the woods close to the creek while the 71st and Von Bose advanced more carefully to the South.
A series of cavalry skirmishes saw Washingtons dragoons rout and Lees dragoons retreat over the horse ford, however Tarleton was unable to capture the main ford due to hits suffered and his horsemen were in turn routed by concentrated musketry from the continentals who had also seen-off a flanking manoeuvre across the western ford by the light company of the Guards.
The 33rd were thrown at the main ford and the 71st & Von Bose at the horse ford but neither could make progress against some firm defence.
This allowed the continentals and the baggage to escape the battlefield and we awarded the rebels the victory.
Posted by Steve at 13:45 No comments:

I made it back from Retford where I had a great day. The demo game was one of those good ones where it turns out to look and play as well as you hoped.

Here are a few photos. As is often the case I struggled with lighting and camera shake. Even with the tripod and a timer the "bouncy" floors led to blurred images. I've cleaned up what I could in Photoshop.

These are in no particular order, so I'll give each one a brief description.

1. Towards the end of the game the 33rd foot storm across the main ford to engage the infantry of Lee's Legion. After two rounds of hand-to-hand, Lee brings his cavalry crashing in to the redcoats' flank while the British general looks on helpless:

2. The same events but seen from a different angle, showing the creek winding off into the distance: 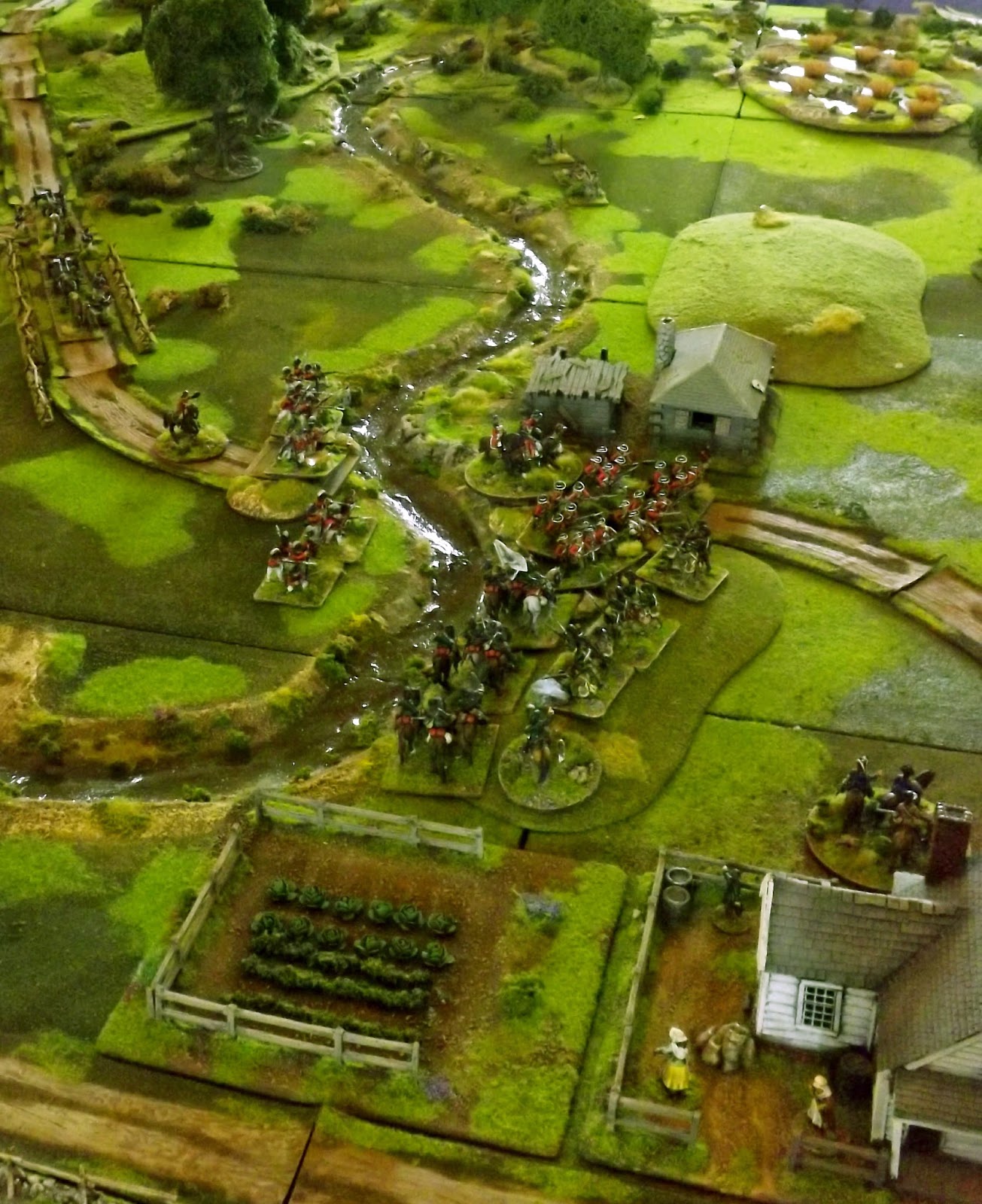 3. Earlier in the day. Here the continental infantry sit on their hill while the cavalry off Harry Lee and William Washington prepare to delay the Crown advance. 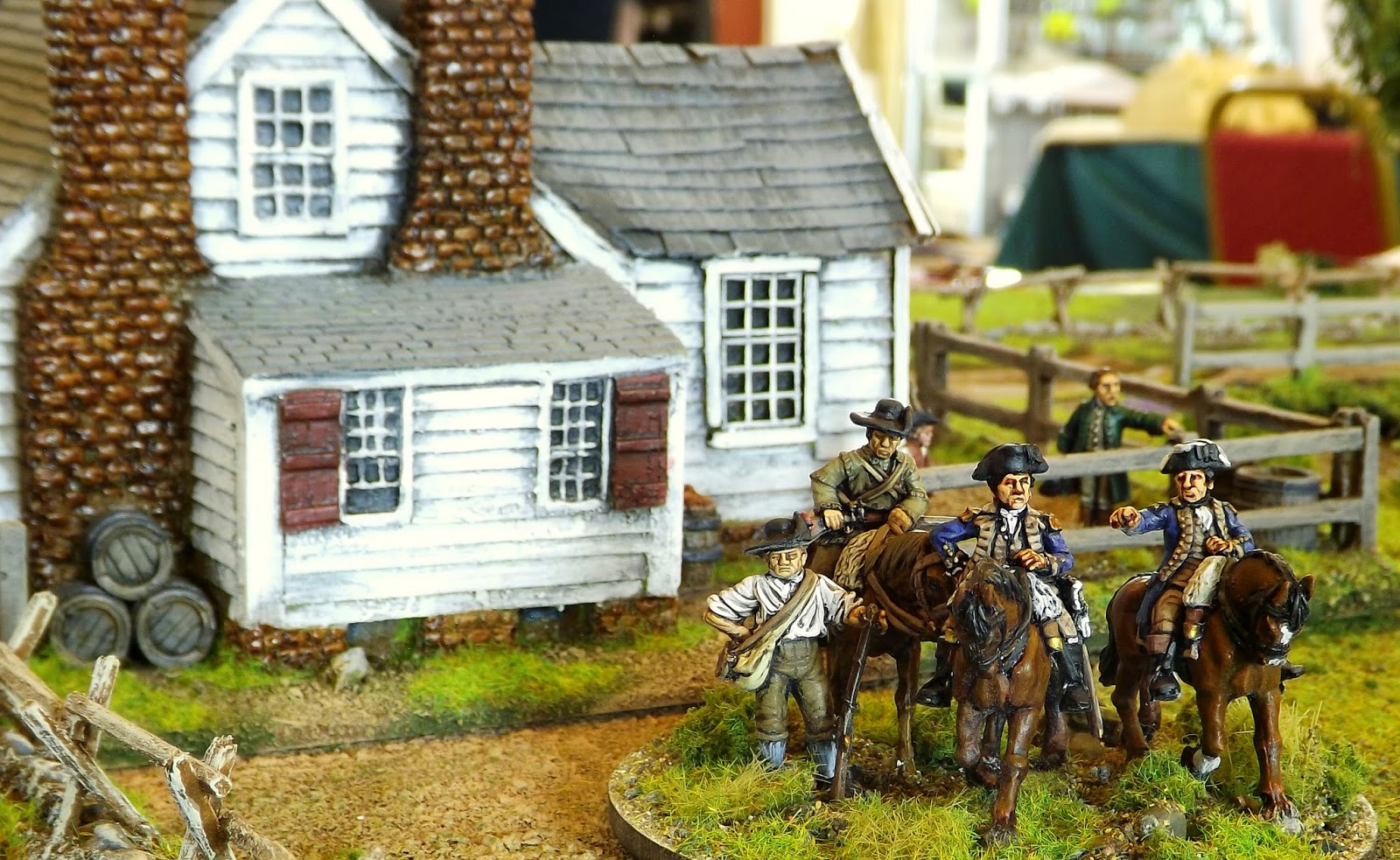 5. The Royal Artillery plods forward (they never did get to fire a shot):

6. After some hard fighting in the woods the redcoated ranks move into the open ground: 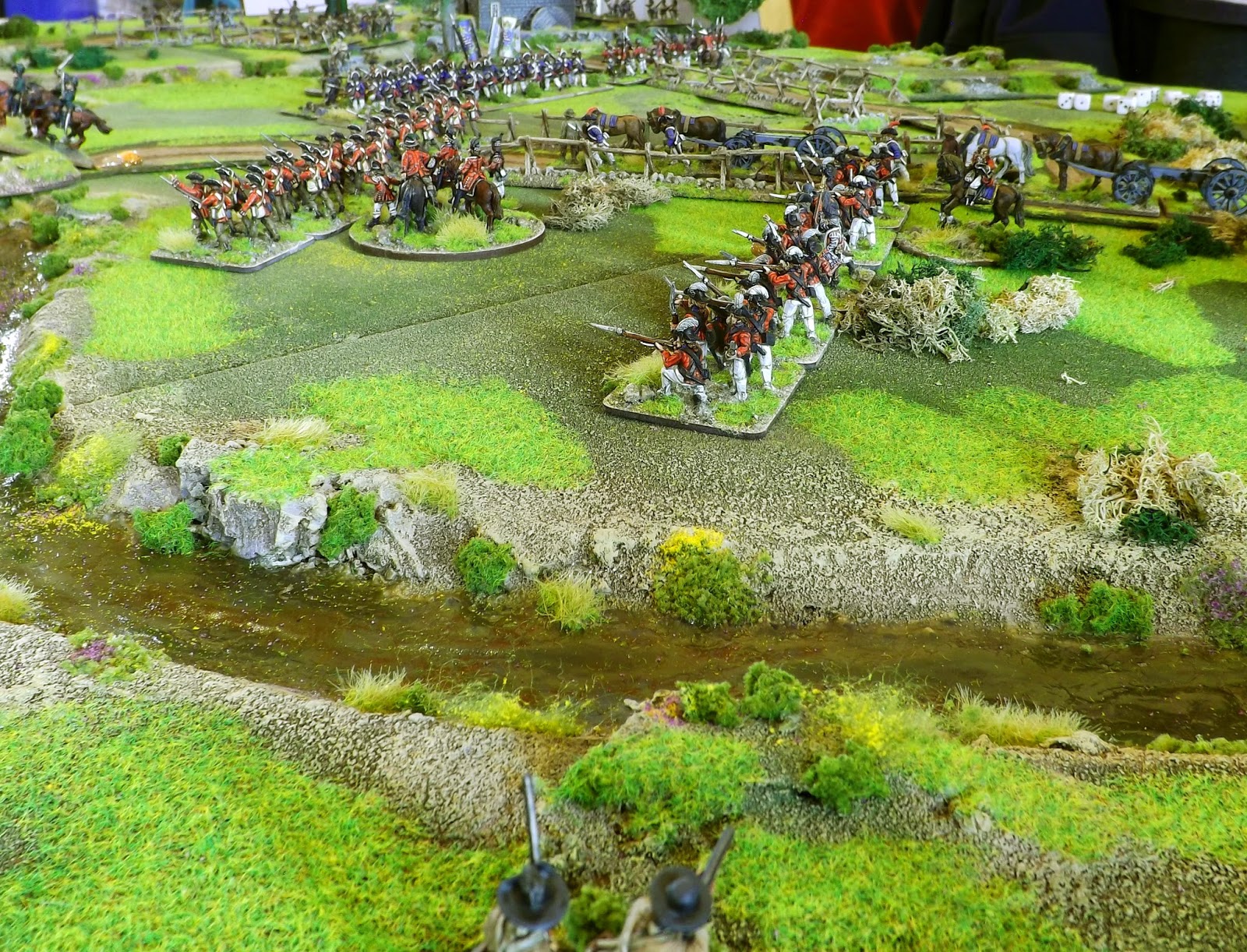 7. A view from behind the advancing Crown army

9. A close-up of the British commander riding behind the 33rd and in front of the fusiliers: 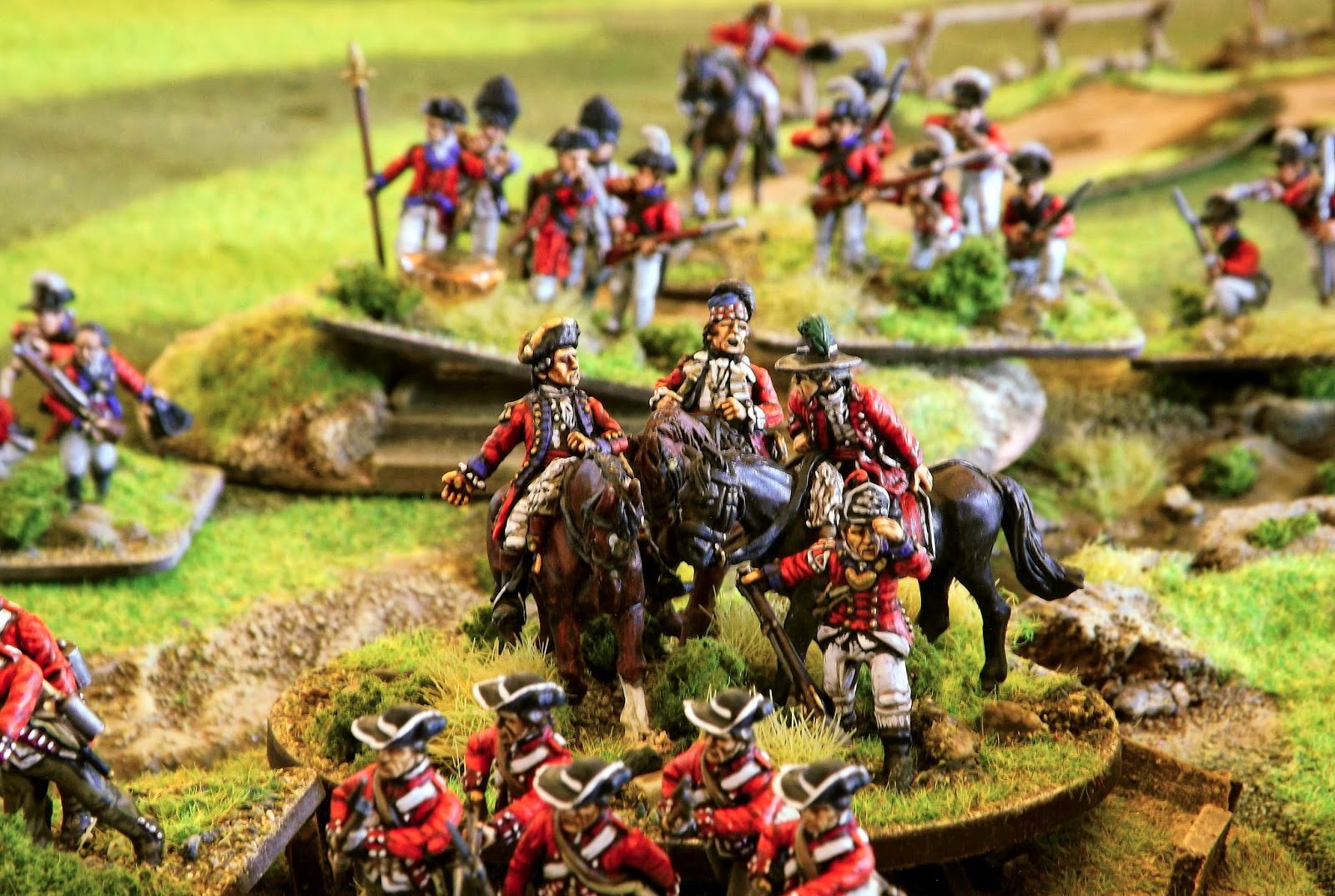 11. The continental infantry make their escape once the baggage has exited the table:

12. Another look at the critical work of Lee's Legion to hold back the 33rd Foot: 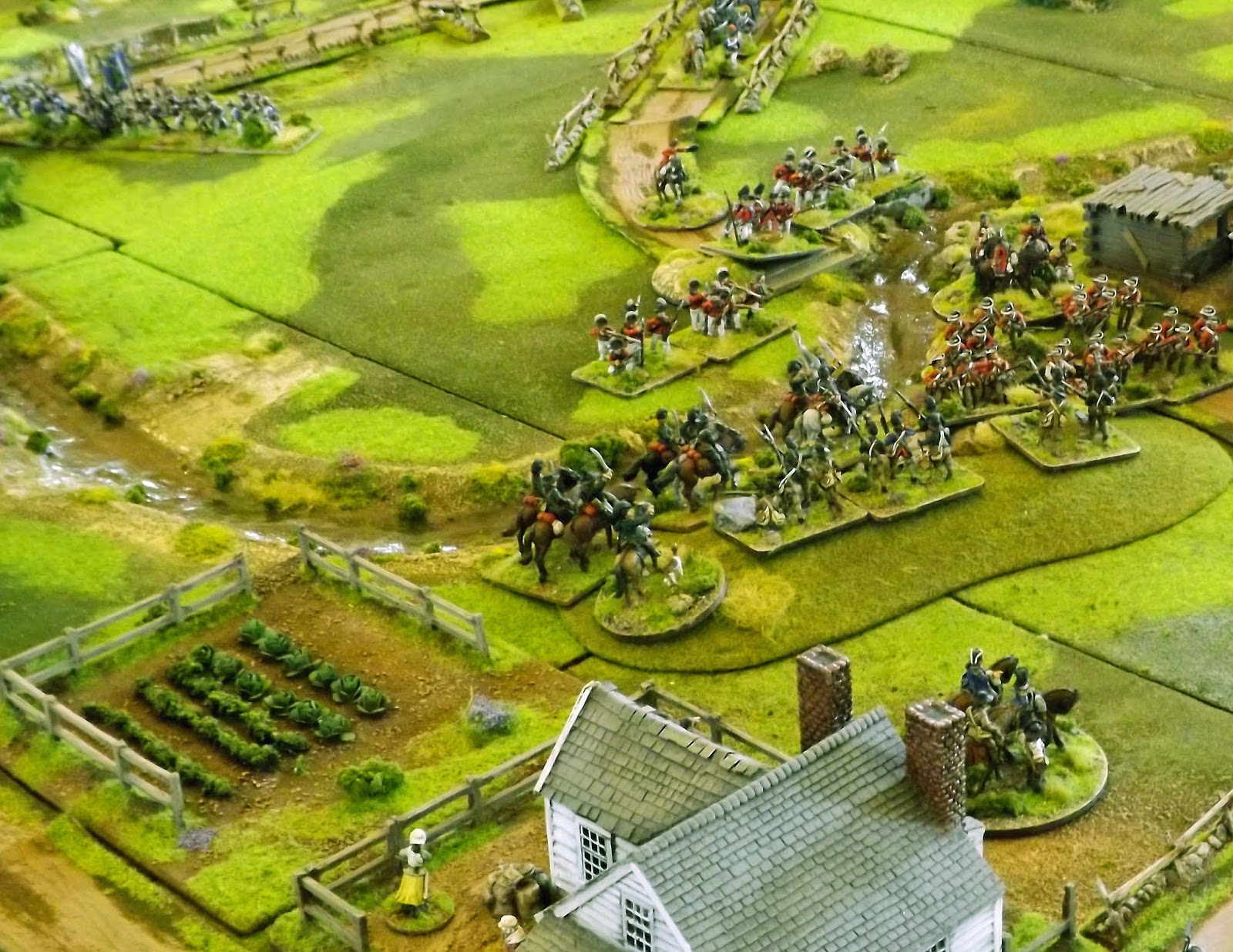 13. Back to earlier in the day. The 71st advance over the wooded ridge but the 23rd RWF remain held-up by some stubborn riflemen: 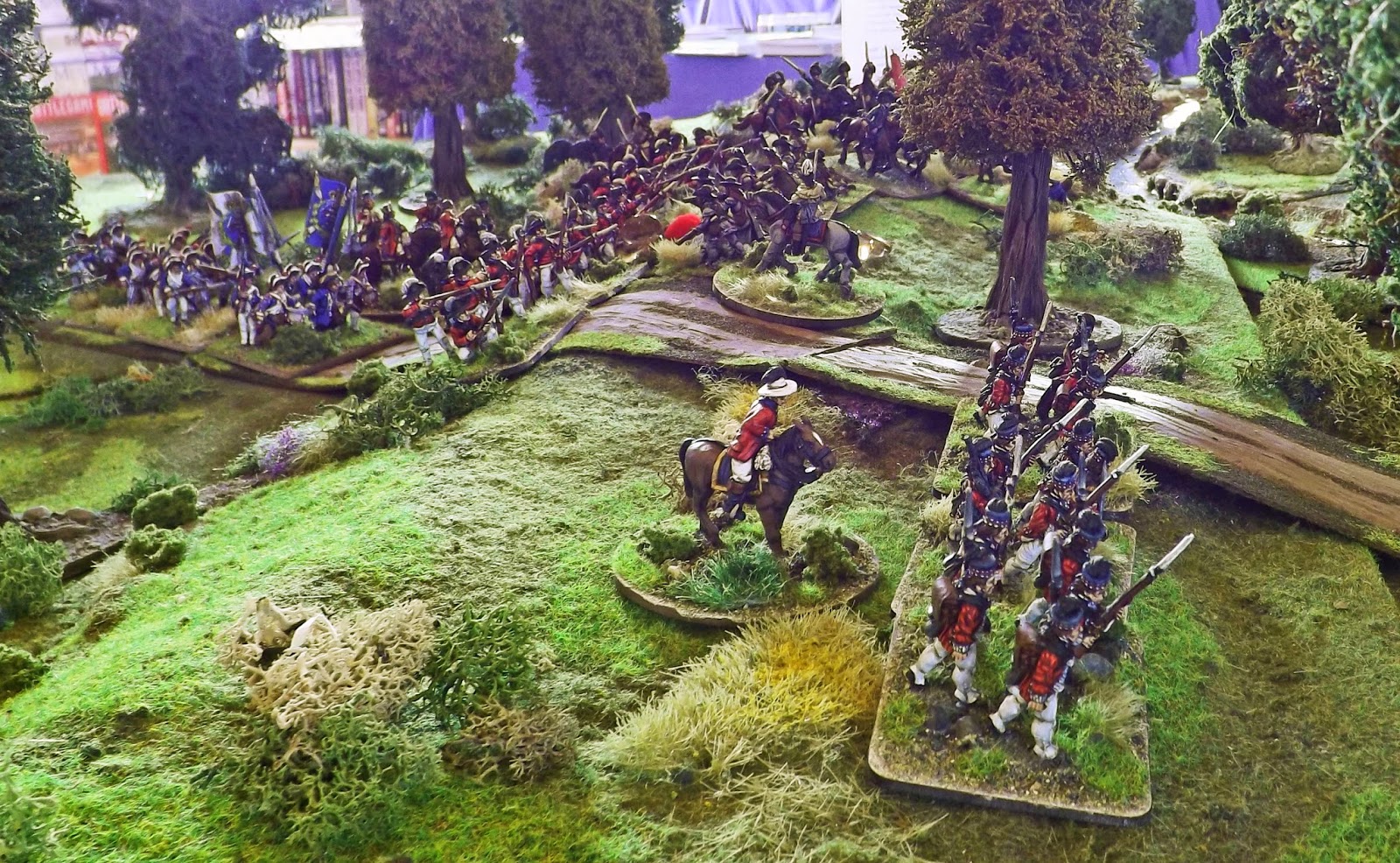 14. Meanwhile the Guards Light Company has made a cunning flank attack over the western ford and charged some seriously outclassed militia riflemen:

15. While Lee defended the main ford, the militia did a superb job holding the horse ford against the von Bose regiment and the 71st Highlanders. Despite being shaken they held their nerve and repulsed all-comers: 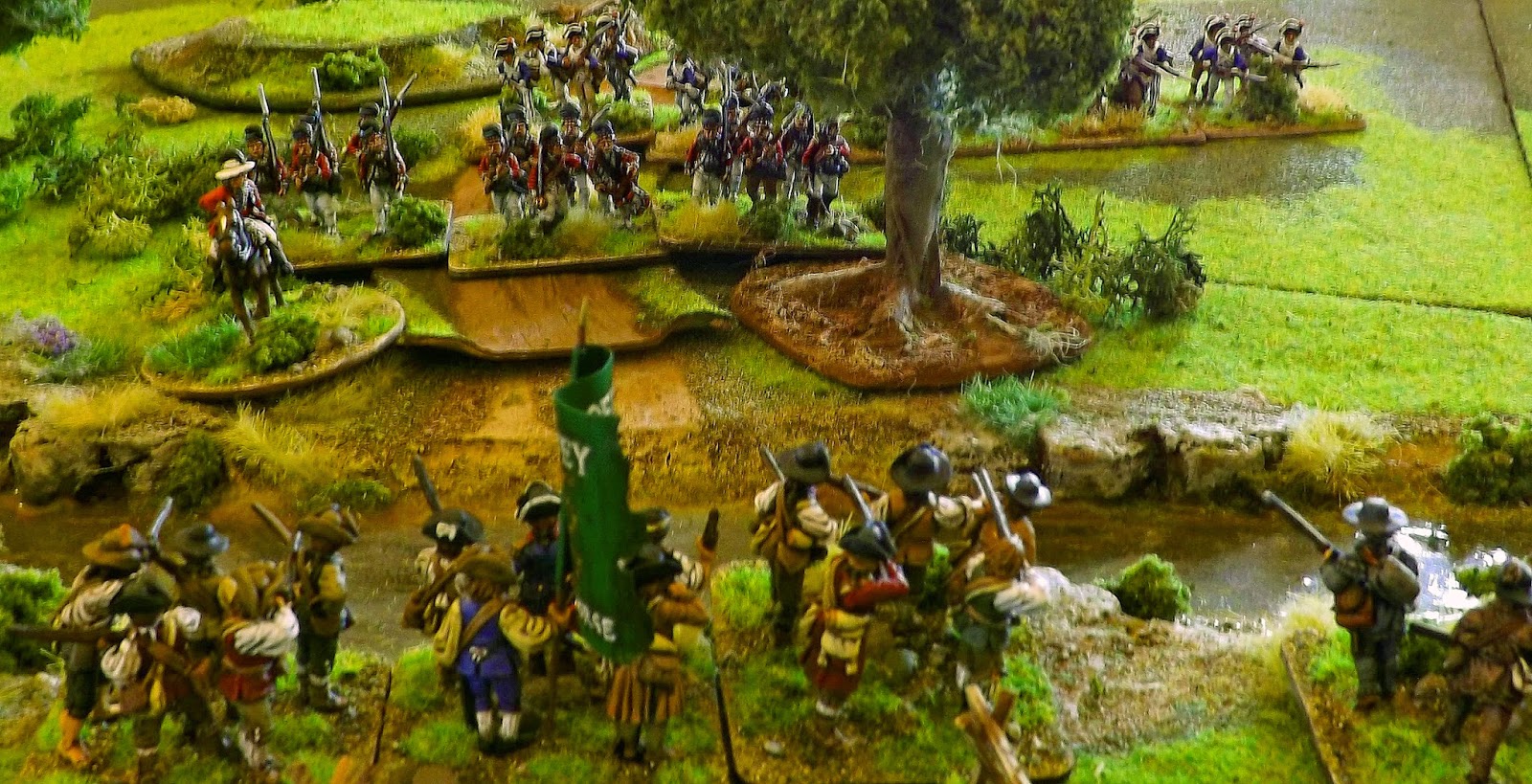 16. A look at that early advance against the riflemen holding the wooded ridge: 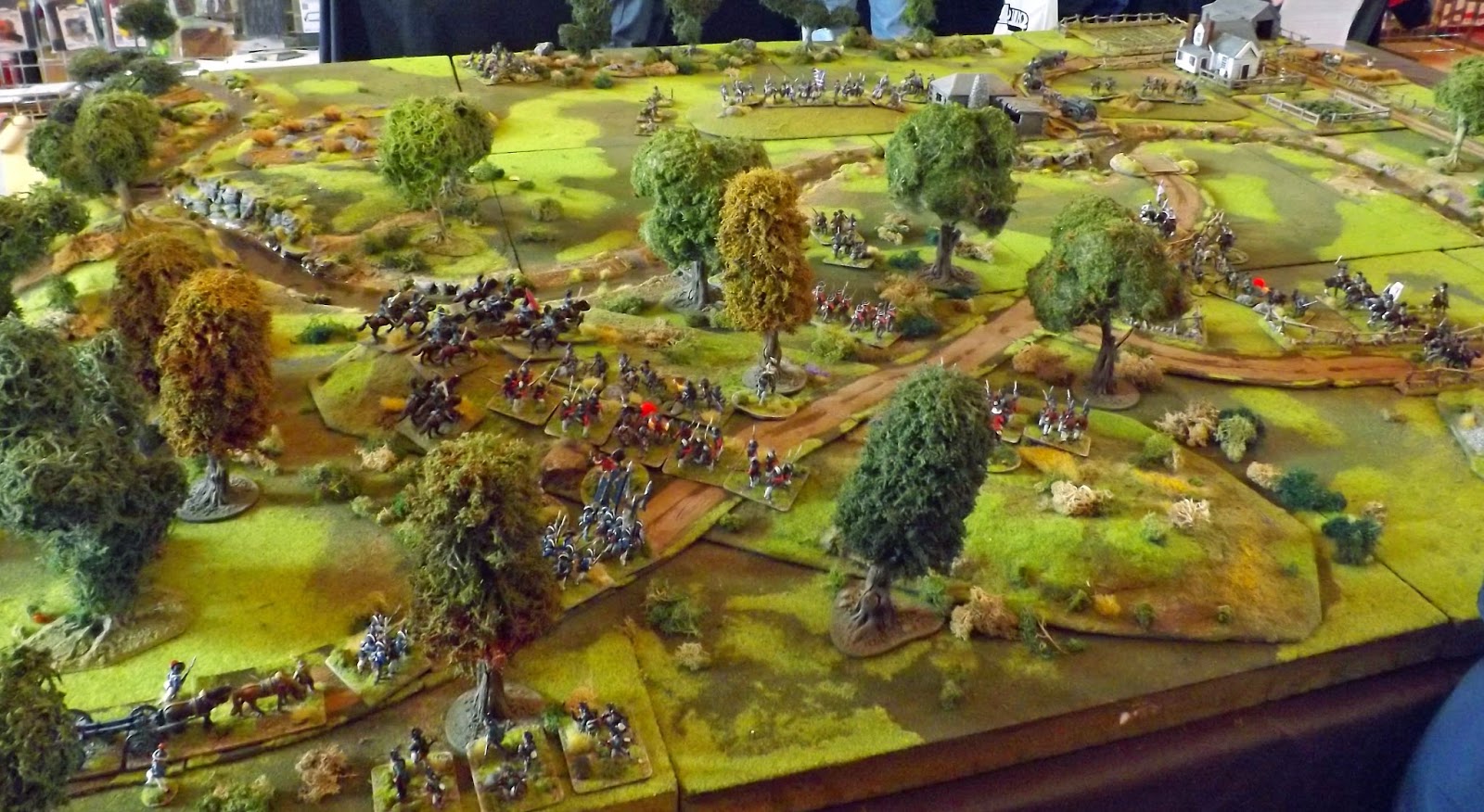 18. The von Bose advance from the woods to engage some retreating riflemen, before failing to defeat the militia at the ford:

19. At one stage, Tarleton led his legion in a mad skirmishing charge over the main ford but accumulated hits left them "blown" and they were routed by concentrated musketry from Lee's light infantry and the continentals: 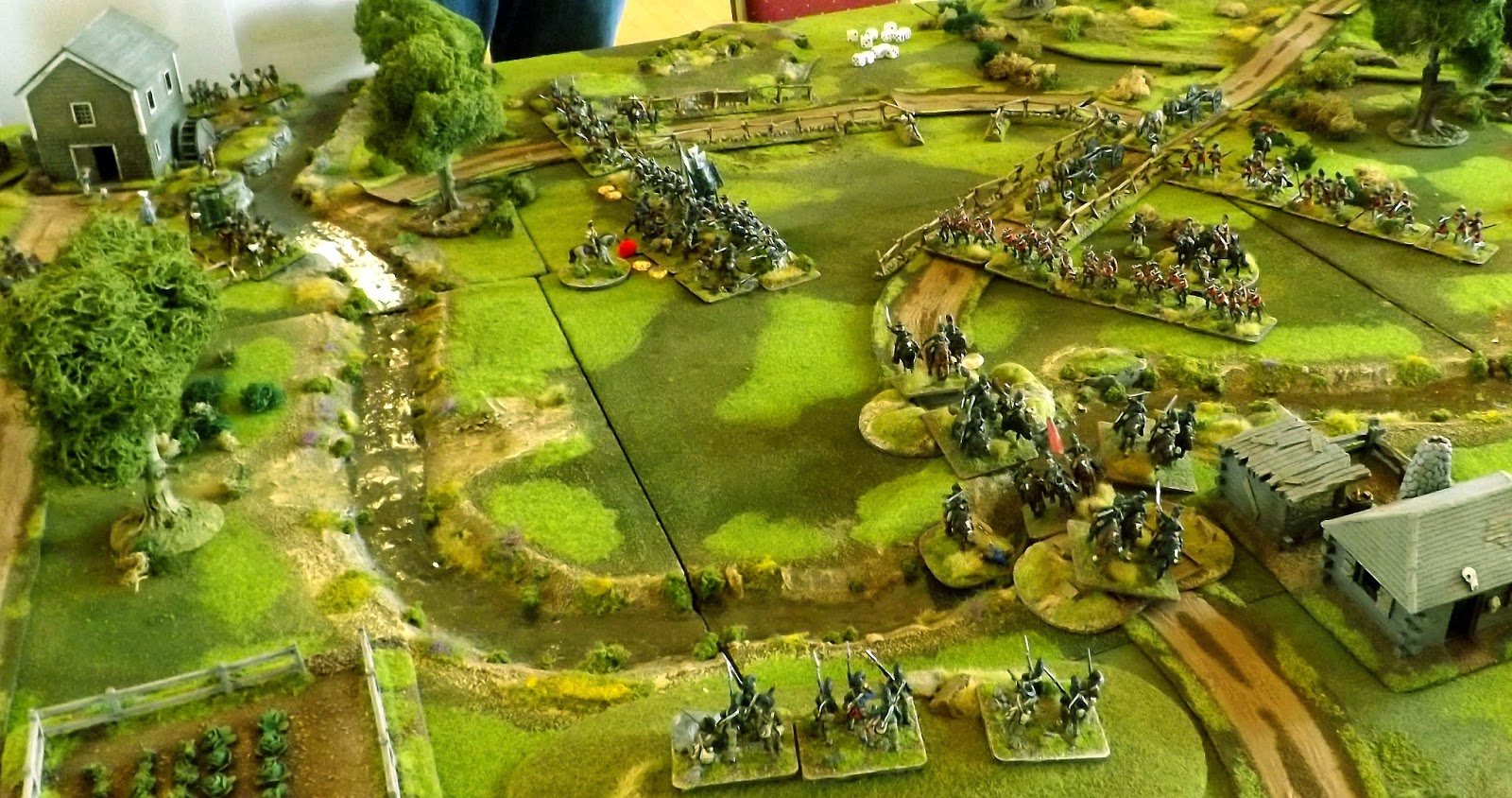 That's the best of the photos.

Weitzell's Mill provided a cracking scenario. While the rebel Americans can never "win" they achieved a victory by exiting all four baggage wagons and the prized continentals more or less intact. Lee's cavalry rescued their infantry with a brave last minute charge.

The rebels lost two units of riflemen, a unit of rifle-armed militia and most critically Washington's light dragoons, however they inflicted routs on Tarleton's legion, the hessian jagers and the Guards light company.

Overall we awarded the victory to the rebels and felt they had done slightly better than their real-life brethren by defending the fords more convincingly and inflicting a rout on Cornwallis's only unit of cavalry.

I'll probably use the same set-up for Partizan in June.

On Sunday I shall be demonstrating a wargame concerning the Battle of Weitzell's Mill, a large skirmish preceding the Battle of Guilford Courthouse. I'll be using Black Powder as the rules.

This is one of my favourite AWI battles to get onto the tabletop, either as a straight historical refight or including a number of "what ifs". You get to use most of the same Crown army as for Guilford Courthouse (the Guards didn't quite make it in time) facing the elite of Greene's infantry, all the rifles in the world and just enough militia to be interesting. And a river. And three fords. And a farm. And elephants!

OK, I lied about the elephants.

Hope some of you can make it to Retford. I'll try and take photos for those who can't.

I have finished off the final units for next Sunday's Weitzell's Mill scenario:

These are various types of rifle and militia:

I have combined the militia companies into a single unit: 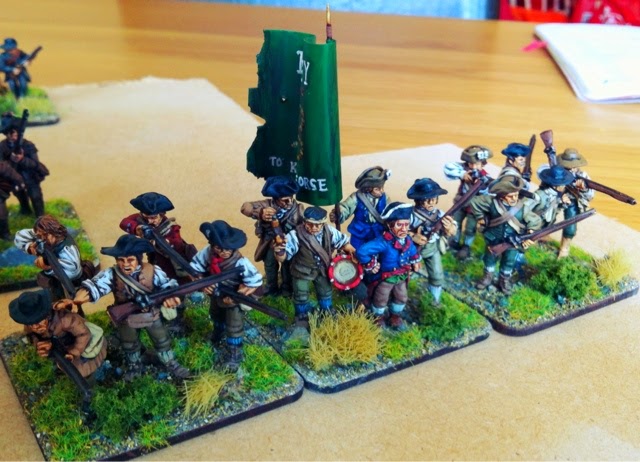 ...here is a better look at the flag. The motto is something of a private joke rather than anything deliberately historical but it seems to work, "Phooey To King George" :-). 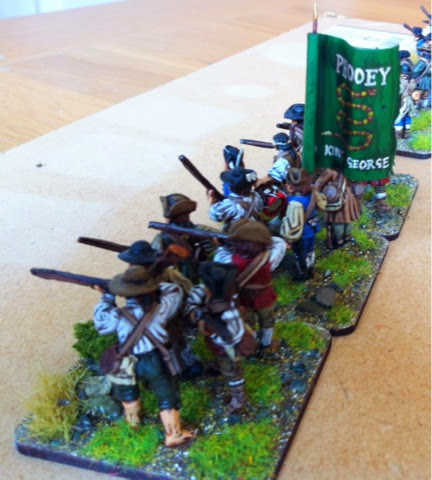 A unit of rifle armed militia:

Lastly, three units of riflemen of slightly better quality than the militia to form the bulk of the rearguard and delay the Crown forces.


Figures are mostly Perry Miniatures riflemen and militia with a few officers from the older Foundry range. Mainly the officers are Foundry standard bearer figures holding spare muskets/rifles from the bits box. The officer of the militia rifles is a Foundry artillery officer.
Posted by Steve at 13:06 9 comments: 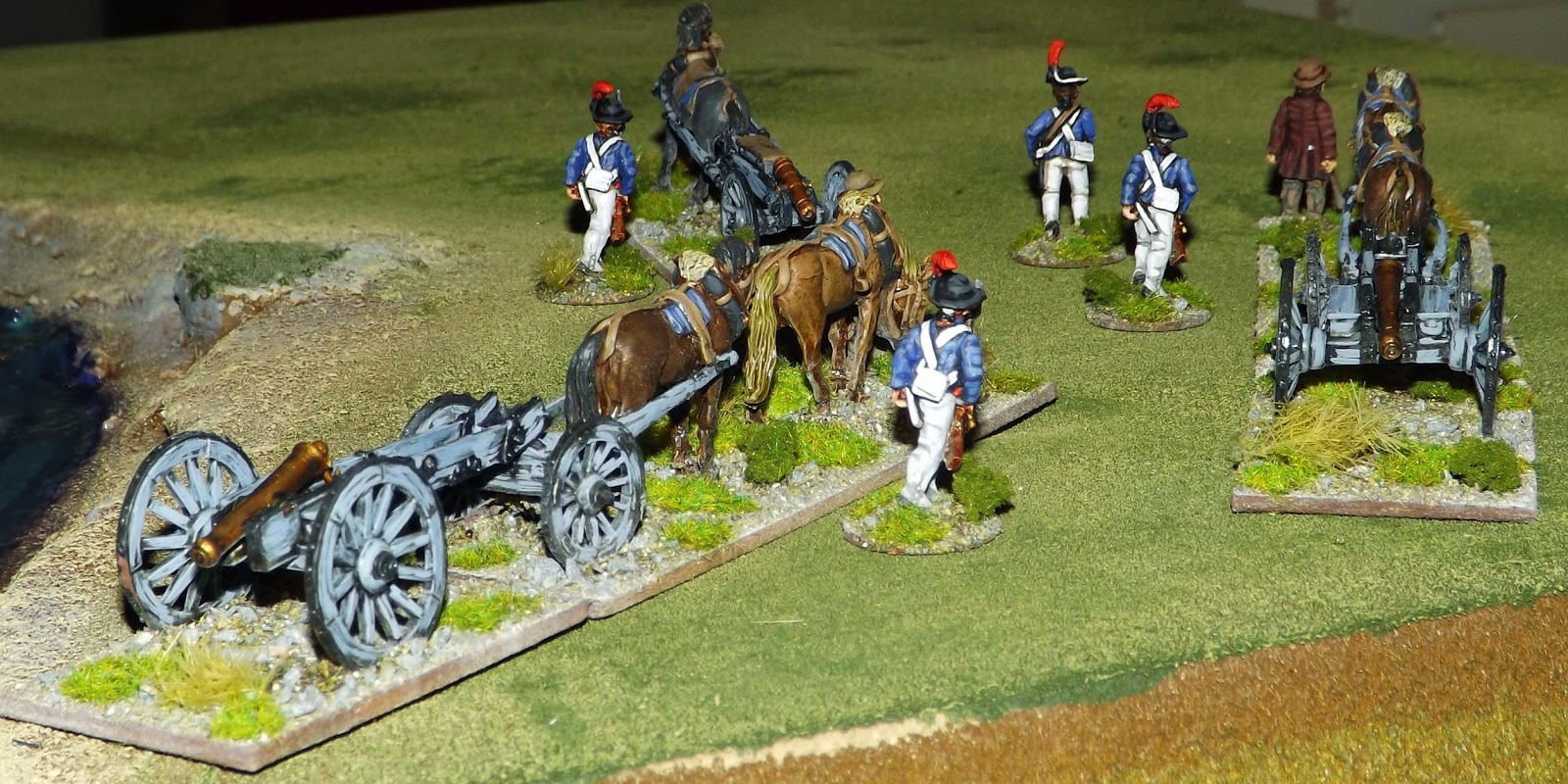 and now in the unlimbered state:

Beneath the artillery are some work-in-progress terrain boards to expend my river options. These haven't yet had the rivers fully finished or been flocked.

Have a good weekend

Having to use up the last of my annual leave I took Friday off to get on with some AWI artillery and some river boards to add to the scenery collection.
The boards are progressing well and the decent weather over the weekend helped to dry the various layers of paint. Still lots of PVA and varnish to apply but I feel I'm getting somewhere. These will be the subject of a "how to" article is WSS at some future date.
The artillery was the usual frustration but in the end came out quite nicely. These are the 6-pounders with British crews in southern uniforms. I managed to finish a firing gun and a loading one as well as two limbered versions. I've also started on a 3-pounder from the old Foundry range. For crew I will stretch the 6-pounder crews out with some spare "light infantry in roundabouts and in cocked hats" from Foundry, painted in Royal Artillery uniforms, I also have a spare gunner from an ammo wagon model. The 3-pounder is also being done in limbered and unlimbered versions. This does mean extra painting but really this is likely to be all the artillery the British will need. For the woodwork I used a 50/50 mix of Vallejo pastel blue and neutral grey.
I also started to renovate and rebase the AWI rebel commanders. I just need to finish a mounted rifleman to fill out General Greene's base.
After all that will be some new militia and possibly a handful of extra riflemen.
Posted by Steve at 13:16 No comments:

Two snaps of my recent refurbishment and expansion of my British AWI forces for Cornwallis's army of 1780-81.
First are the 23rd, 33rd and two small (or one large) units of the 71st.

And below we have the Guards' brigade with the light and grenadier companies in front, followed by two battalions of hatmen.

The artillery are on the painting desk along with some rebasing of the jagers.
After that I can turn my attention back to the rebel colonists.
I'll be putting on a demo game of Weitzell's Mill at the Cannon show in Retford on 30th March if anyone wants to see these chaps in the flesh.
Cheers
Posted by Steve at 10:21 6 comments: