As part of my research into the 3rd Afghan War and the Waziristan campaign, I tracked down this book via Amazon. First impressions are good, it covers the various scout forces formed from local tribes in the first half of the C20th and it includes a number of photographs of scout units. They are surprisingly uniform in appearance and so I have ordered some Copplestone Muslim infantry to put together a couple of companies to support by Back of Beyond British. 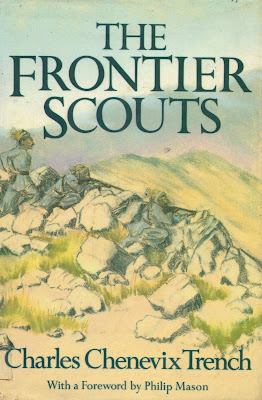 I'm still debating the figures to use for the afghan army. The tribal irregulars I can do from a variety of Foundry packs (Hill tribesmen, Baluchis etc) but the afghan regulars were a mixed bag, many in native dress but with centrally issued equipment (webbing, etc) and small fur hats; and there isn't anything that looks spot on for these. I'll get away with some regular units being better uniformed - probably using Ottoman figures as proxies (GB make Ottomans in fezzes, that I may be able to convert to fur hats with some greenstuff and a pin.

Where did September go?

Crikey, this has been a busy month. Work has been hectic, but I have managed to tinker away on a few wargaming projects.

My main interest has been knocking together a set of quick-play rules for the early C20th, to cover WW1, Back of Beyond, Very British Civil War (VBCW)RCW, SCW and the Italo-Abyssinian war (among others). To this end I have been reading through a lot of published stuff, including some older gems such as Charles Grant's "Battle!" to garner ideas. I have ended up with a game that looks a bit like "Rapid Fire!" but plays more like the board game "Squad Leader" (but fast). First playtest was last night at the club. I had my battalion of the Borsetshire regiment (4 companies + command unit) supported by a couple of platoons of Vickers MGs and two companies of Turkoman levies. On the other side was a mixed SCW/VBCW force of approximately the same size (about 60 figures for each side) supported by a HMG. The game played well and even with the unfamiliar rules we were finished well inside 3 hours and the time flew by. The rules were deadly enough to fee "in-period" but not so deadly that using tactics became irrelevant. The game lasted around 12 turns and it felt "right" or close to it.

Next I have to think about rules for armoured cars. We'll get to artillery later :-)

On the painting front I have been dealing with some British Lewis Gunners (Copplestone) to beef-up the Borsetshires. Other projects are ticking over and I will get back to them very soon.

Oh, and Partizan was good, but I was knackered...

The second guards brigade is now finished, so here is a muster of my first four British brigades for Waterloo:

Loads more on the painting table.