I managed a quick burst of painting today and moved things along.

I've even prepped the next fusilier regiment.

Hi all
The painting this week has gone OK and I have finished off another Hessian grenadier company while making progress on more figures. 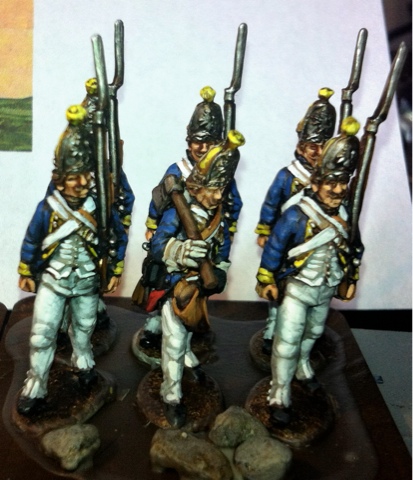 I also finished painting the two chaps below as an artillery command stand. They are actually from the Perry AWI Hesse-Cassel garrison troops command set. I'm pleased with the telescope lens as I've not painted "jewels" etc for a while. 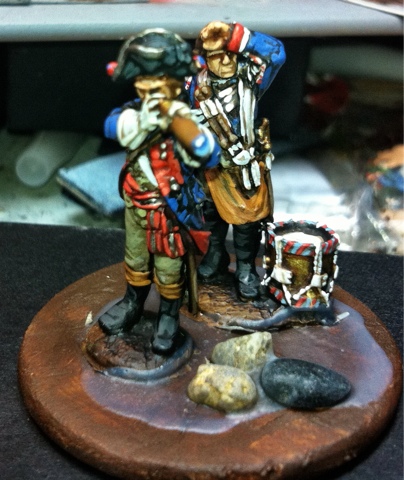 So. Still to finish are the grenadiers of the fusilier regiment Erbprinz and some command stands. 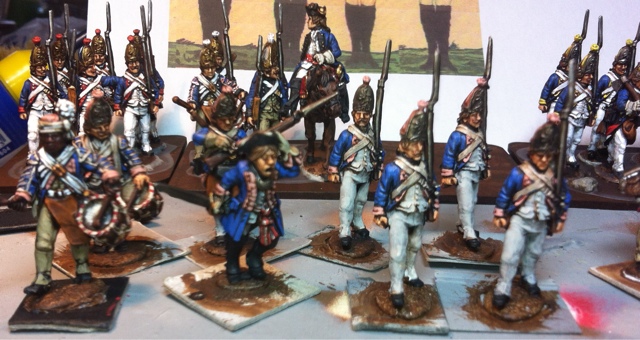 After that I have the figures for another fusilier regiment. I could and perhaps should make this the Knyphausen Rgt as this would give me the right troops for Trenton; however I'm tempted to make them Erbprinz as the rose coloured facings are pretty striking and the silver mitres would be a contrast as fusiliers Lossberg and grenadiers Rall have brass ones.
...and no, I don't fancy doing both right now!
Apart from painting I have arranged a table for an AWI game at Partizan in May. This is likely to feature the Hessians and British attacking the rebels, probably as part of the 1776/77 campaign. It will make a change from the south. My current thinking is a hypothetical mash-up of two battles; Bound Brook and Short Hills, probably taking the former situation but with an OOB more like the latter.
My recent reading on the 1776/7 battles suggests I really need an extra battalion each of British light infantry and British grenadiers. So these could be the next projects.
I might not get much more done this weekend as I'm on call, but should get those Hessians finished by this time next week and maybe even finish the basing.
Toodle pip!
Posted by Steve at 13:39 3 comments: 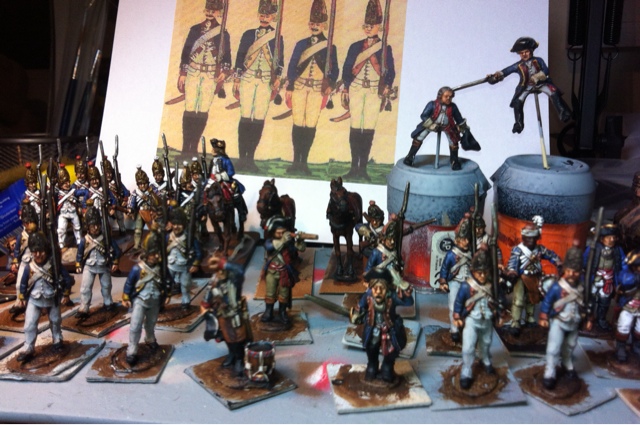 The colours have all been blocked-in and the figures washed with strong tone ink. The faces were then repainted and washed with flesh wash, the white small clothes had a coat of very thinned dove grey.
I can now start highlighting.
Posted by Steve at 21:03 1 comment:

This week has seen some steady progress and I have managed to get in 30-60 minutes most evenings after work. As I posted before the two Hesse-Kassel artillery crews and guns were finished off: 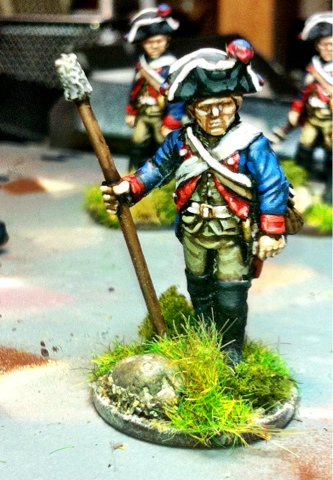 ...and the painting table now contains a variety of small projects. In the foreground are a couple of mounted Hessian officers. Back-left are some finished grenadiers (2 bases) and back right are the undercoated figures for two further bases to finish the battalion. The rest of the figures are being painted up to add to vignettes, command stands and so on. Mostly Perry with a couple of extras from the old Foundry SYW Prussian range sculpted by Mark Copplestone.

Here is a closer view of those finished grenadiers. The basing will be done once the rest of the unit is ready: 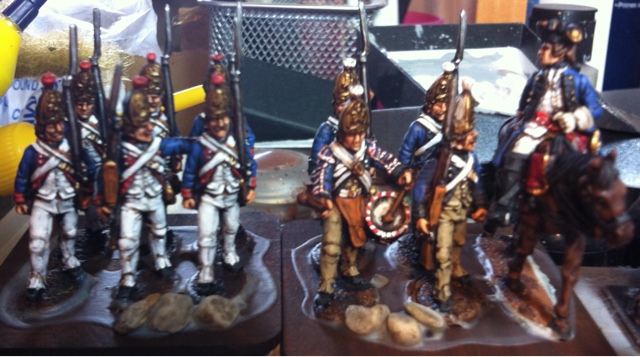 These two figures are from the Perry garrison musketeer command pack but I will paint them up as a little command vignette for the artillery. These have been primed with a grey aerosol primer and a first coat of armypainter ultramarine blue has been quickly applied with a big old brush. The other colours will then be blocked-in more carefully before a coat of strong tone ink then the highlighting can begin. 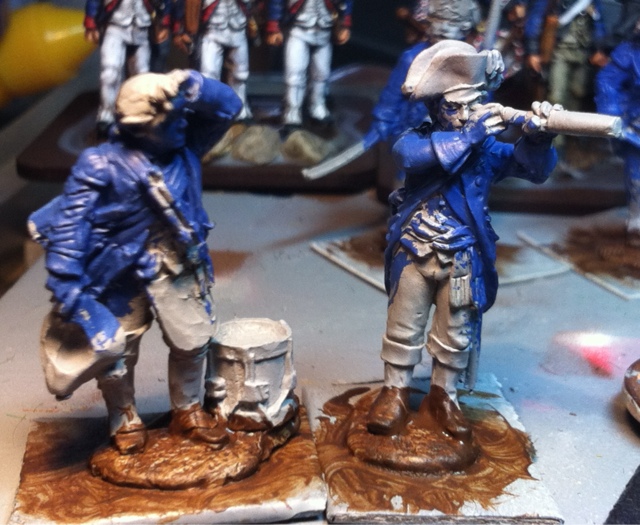 My Perry order also arrived with the figures for Fusilier Rgt Knyphausen who will be the next cab off the rank.

I think that will be enough Hessians for now. I might do some French afterwards, most likely Lauzun's legion but don't want to get too far ahead of myself. It would also be good to get some games played and a few articles written.

Finished these off today so I can get on with the grenadiers during the week.

Hi all. It has been a quiet week but last weekend I completed the basing on the Lossberg fusiliers. Here is a step-by-step:
First the figures are glued to painted MDF bases along with a few pieces of aquarium gravel: 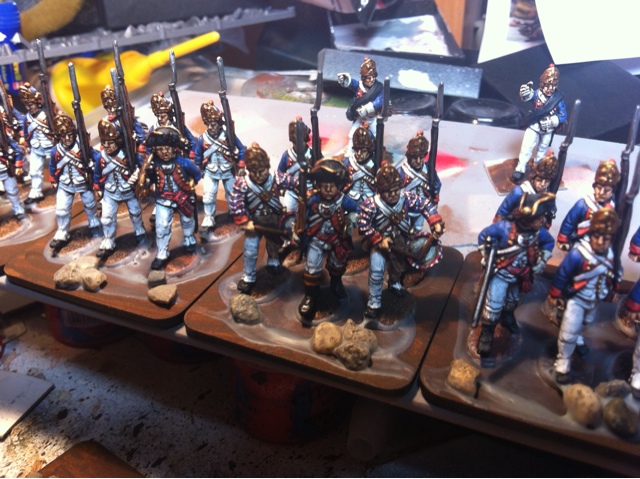 Watered down PVA is then brushed onto the base and between the figure feet and the wet base is dredged in the mix shown below: 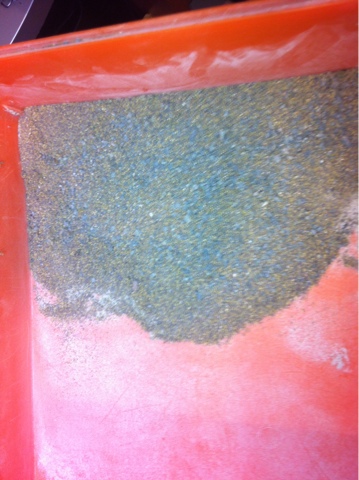 This is a mix of various ground scatters, some fine model ballast, chinchilla sand and some dry powder filler.
Once dry the base looks like this: 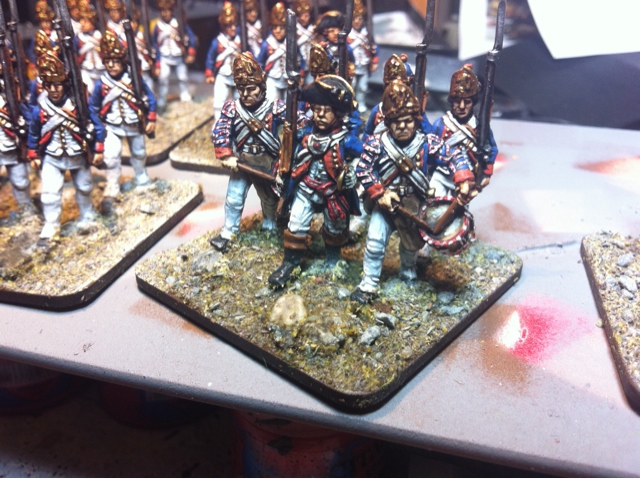 Next I glued on some dry grass torn from a mat of the stuff and some pieces of clump foliage: 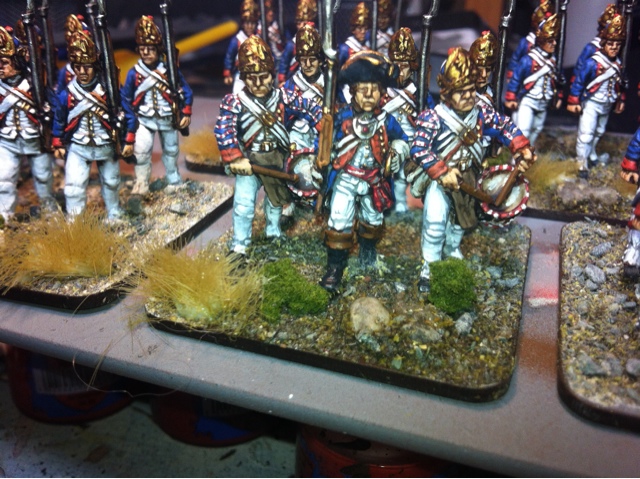 And finally I used diluted PVA to stick on patches of static grass: 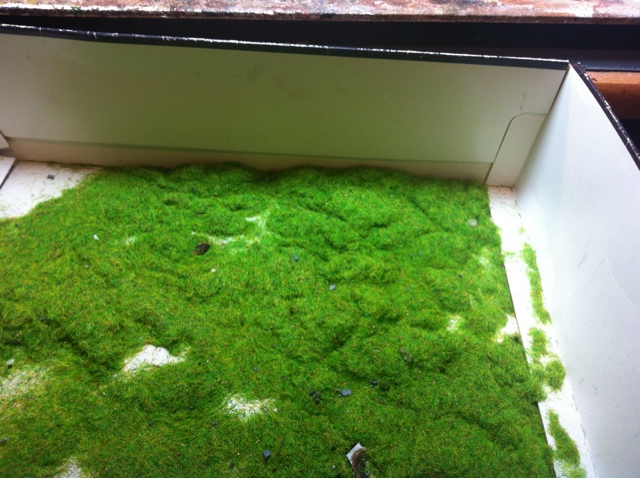 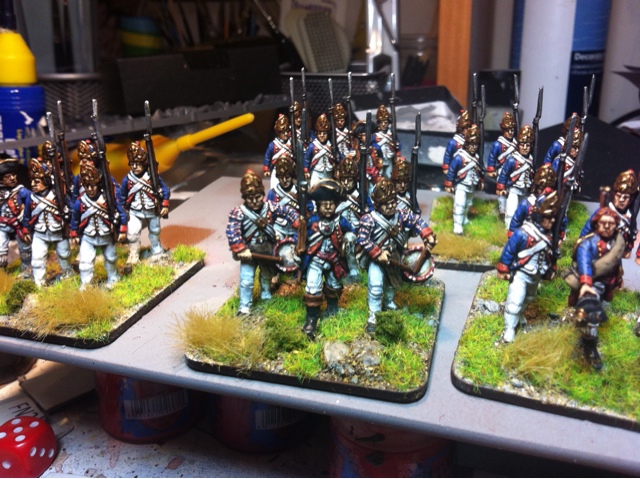 During the rest of the week I have started a couple of hessian grenadier bases, two guns and crews and a couple of extra command figures. I'm just blocking in the main colours at present on the figures and the guns are coming on well, just needing some washes and highlights on their barrels.

I might try a game in the garage, but this is temperature dependent. I'd like to try something based on Bound Brook.
Cheers!
Posted by Steve at 11:52 4 comments:

My blogging was rather hit and miss in 2015 so for this year I am going to try to post a weekly entry with a summary of what (if any) wargaming things I have been up to. Lets see if that works a bit better!

It was nice to see my latest scenario article in print in MWwBG 393. I posted about some of the games I played to develop this scenario towards the end of 2015. I'm taking a quick break from scenarios now and have put together a couple of articles for the magazine that present my modern skirmish rules, so look out for those in upcoming issues. 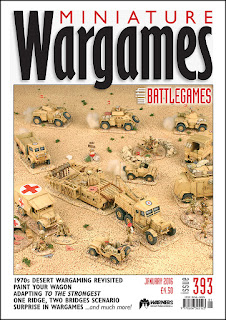 Over the week I have finally finished the brushwork on my Lossberg Fusiliers and stuck them to their bases. I plan to get the groundwork finished this weekend and have a couple of flags on the way from GMB to finish these off. I usually hand-paint flags but am using GMB for the hessians for now.

I finally managed to get to the club in Nottingham this week. The group now meets at the Rose and Crown pub in Lenton, which is a bit of a blast from the past for me as I was an undergraduate just around the corner so know the area fairly well (or I did 25 years ago).

This week I had arranged a game with Matt of Morningstar Publications to test out his rules for AWI battles. I have to congratulate Matt on producing a two-page rules set that manages to capture much of the flavour of the AWI. The playtest was really useful and interesting but already gives a pretty fast-flowing game that doesn't require much in the way of markers and seems to work well for those "small" (1-2 brigades a side) battles so typical of the war. They obviously aren't available yet as Matt is still tweaking them but if you are interested in the AWI they will be a good (and low-cost) option.

Game play seems quite similar to what Joe Krone has achieved in "Land of the Free" but in a more streamlined way witha bit less fuss and a lot less markers to clutter up the battlefield.

Below is a shot from the game which we fought to a conclusion in around an hour of actual playing time. As expected the British forced the rebels from the field but at huge cost to the 23rd and 33rd foot who did the bulk of the attacking. As I was going straight from work I used a plain felt cloth rather than my customised terrain boards, but I think it still looks OK. 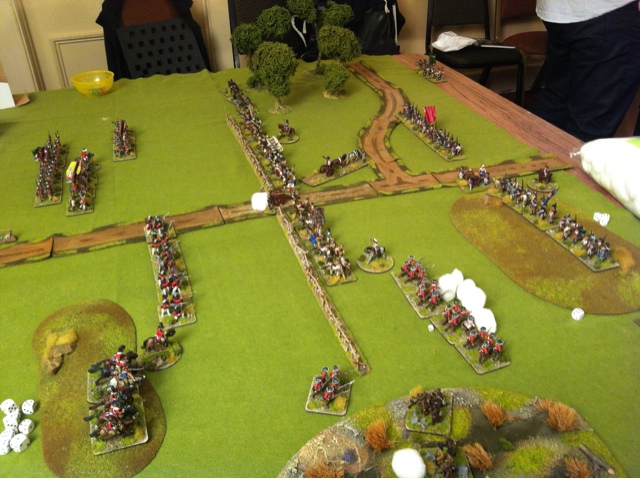 There were a few interesting games also going on at the same time. As ever James and Scrivs put on a pretty battle, this time using James's now well-known Italians vs Ethiopians... 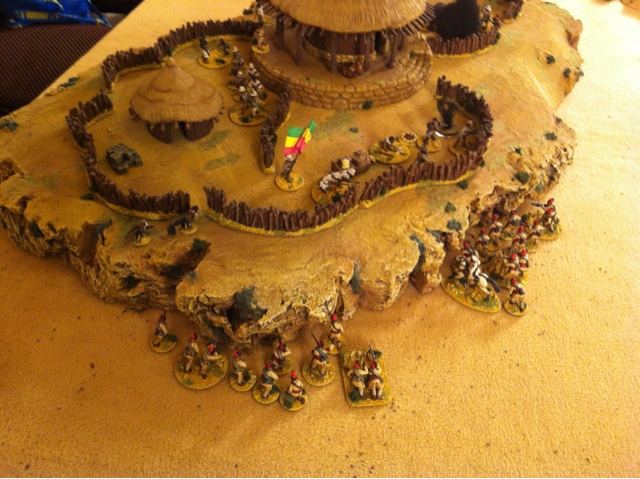 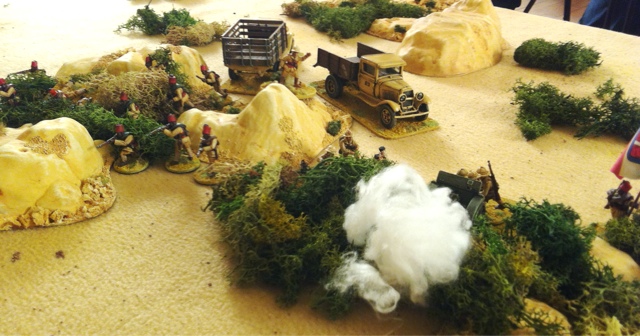 ...and finally I was reunitied with my Julius Caesar command base that I lent for a photo shoot about 2 years ago and who has been on a roundabout journey back to me. Finally he can take his place at the front of his legions. 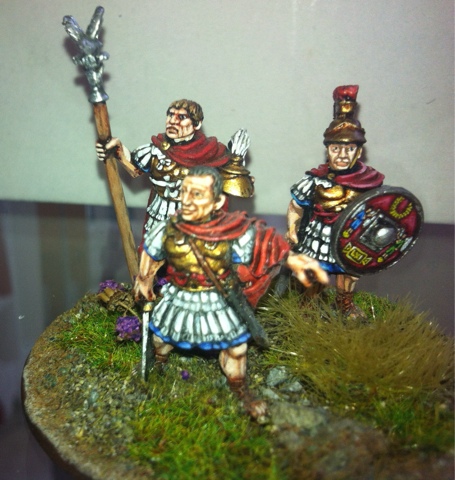 Not a bad week overall.

The only disappointment was finding out that the Irregulars may not be able to present James and Scrivs's superb Verdun game at Salute as we are on the "reserve list". This is a real shame as we have supported Salute with some good looking games for 15 of the last 16 years, even picking up some awards. Hopefully the club will get a place as the game seems particularly apt, with 2016 being the centenery of the actual battle of Verdun and as with many of our previous effort (Arthurians, AWI, Abbysinia, El Cid, etc) tries to bring a fairly "niche" period into the mainstream. For pictures of the Verdun collection check out Scrivsland and the latest Wargames Illustrated.

My understanding is the reserve list also includes Simon Miller, the "bigredbat" , producer of the fabulous "To The Strongest" rules and stager of spectacular demonstration and participation games. I really hope Simon gets a place as he really is one of the "good guys" and his games really show off our hobby at its best.

I still have a few Christmas presents to try out and review so I'll keep you posted. These are two sets of rules: Art de la Guerre (ancients) and Iron Cross (WW2) and a board game "Clash of Wills" that covers the battle of Shiloh in a fairly abstracted way.

Right ho, off to start the groundwork on those Hessians, see you next week.

I have finally picked up that paintbrush again to crack on with the Hessian fusiliers. The last 20 figures have all had their base colours applied and I'm now waiting for the washes to dry. There might be something worth photographing soon!

In the meantime I have been finishing off a couple of articles for Miniature Wargames in which I'll present my fast-play moderns rules. To support this I have taken some photos of my 15mm modern african collection. Examples below: 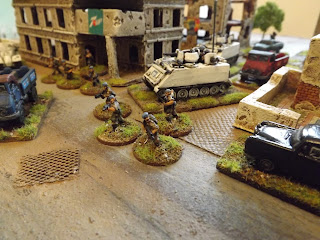 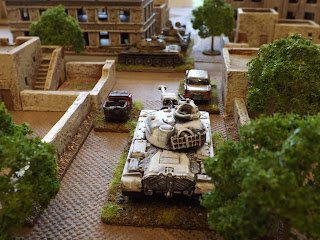