Here are some pictures of the finished conversion to the model livery stable. This has been in my collection for many years, but I have always struggled to find in interesting. Hopefully the new look will encourage me to put it onto the table more often. Using the "fly swatter" windows means that it matches the style of the other AWI buildings. 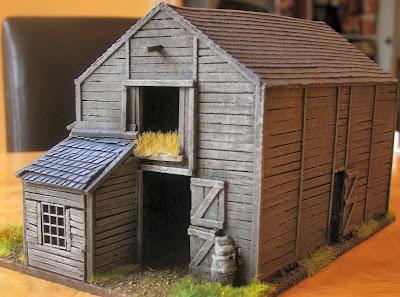 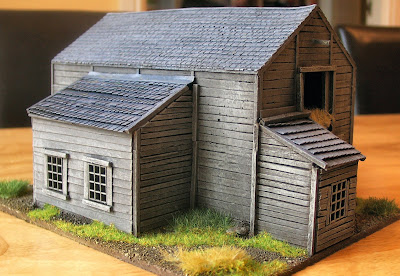 See you tomorrow at Partizan! 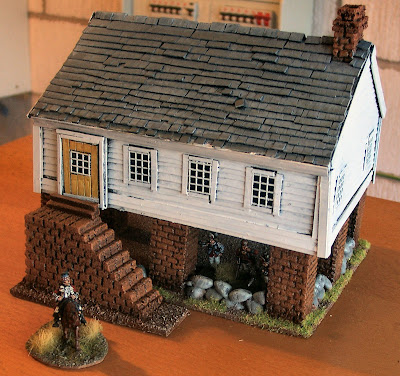 There is still some tidying up to do, but here is the almost finished model of the Mecklenburg County Courthouse. I'm not sure about the yellow door, but otherwise I'm pretty pleased with the result.

There is space for troops to be places in the marketplace under the building, or the building can be used without the pillars. 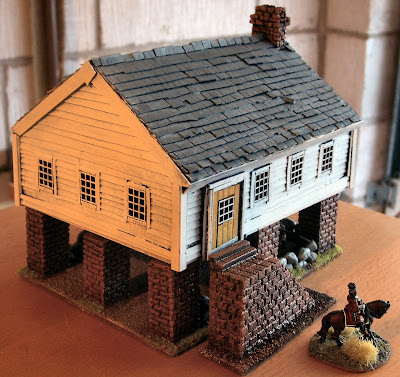 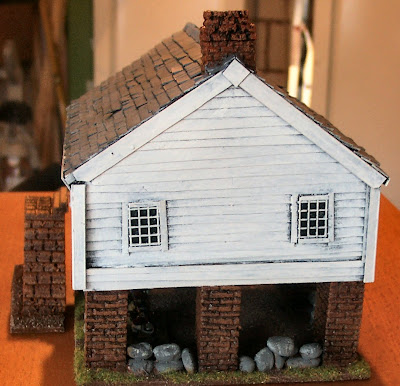 As well a the courthouse I have also tarted up a "Hovels" livery stable by adding some bits and pieces to help it fit in with the other AWI buildings. Construction is about done, so I'll get some paint on it tomorrow. 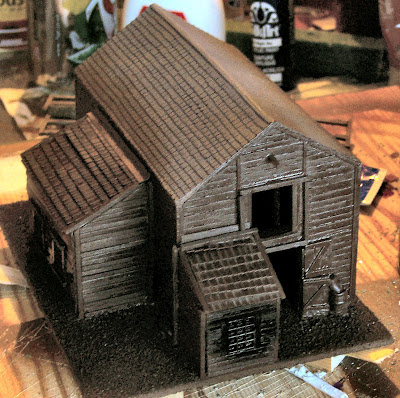 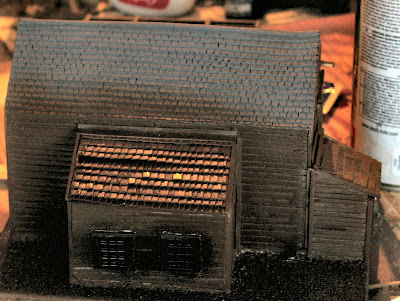 Don't forget, it is Partizan on Sunday at Kelham Hall near Newark, Notts (UK, not New Jersey). I'll be generally helping around the show and playing the 1930s Abysinia game. See you there!
Posted by Steve at 21:08 3 comments:

Here is the almost finished river section of my terrain boards. Just another few coats of varnish to go on the river. As today has been so hot, I should get about 10 coats on in total. This would normally take a couple of weeks in the cooler weather! 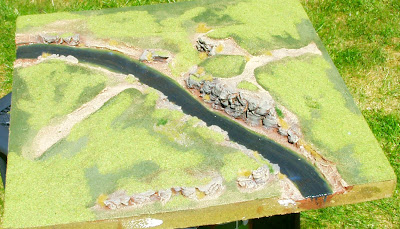 Here is a shot of the halfway finished Mecklenburg County Court House, standing on its brick pillars. The windows are make by cutting up a fly-swatter (75p each on sale) - thanks to John D for the tip!

The walls are made from foamcore, with ceral box card used for the planking on the outside. The windows have a lintel and widowsill made from matchsticks and the rest of the fram is completed with more cardboard. The chimney and brick pillars are made from dense polystrene foam, embossed using an old biro. 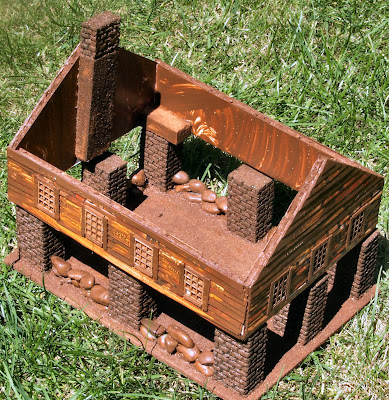 ...and a sot from later on as the roof starts to come together. Looks like a few evenings' work to get this finished off. 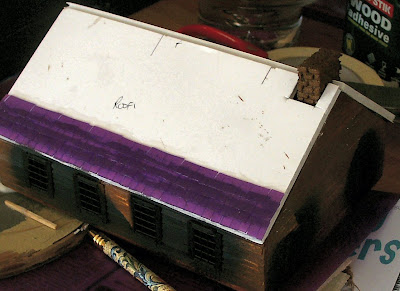 That's it for now 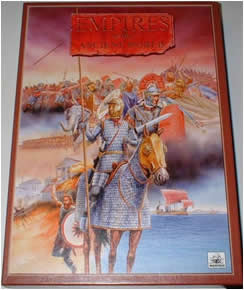 ...we played "Empires of the Ancient World" at the club. We played this a few times when it first came out in 2000, but it has languished in a cupboard. I dragged it out a fortnight ago and we had a good game and did the same again last night.

This really is a very good game, very replayable and with a good balance of military, diplomatic and economic strategy. If you can find a copy it is well worth having. 3-5 players, games last about 2 hours.

On the AWI terrain front, I have finished the current batch of fences, am just painting up the 8th terrain board (river and cliffs) - and will take a pause there. I have also started construction of a building; my interpretation of the Mecklenburg County Court House circa 1780. This is described as a frame building supported on eight 10-foot high brick pillars to make a marketplace. The gaps between pillars were filled in by a low stone wall. The courthouse was defenced by the patriot forces at the Battle of Charlotte that follwed Camden. I think this will be quite a unique piece among the "usual" AWI buidlings for the southern campaigns.

My first headache was how to make brick pillars (on the cheap, obviously). I solved this by cutting sections out of the dense polystyrene foam I had left from making by 6mm Wagram terrain boards last year. These then had a brick pattern scribed in using an old biro. When guled to a base with PVA these look just right, but will need a coat of PVA and paint to enable them to withstand the rigours of gaming (and storage). The stone walls will be made from gravel. Photos at the weekend of work-in-progress with any luck.

No pictures today, work continues on the fences and the terrain board with a river carved in. Hope to get all the terrain finished in the next week and then get a game set up and photographed...
Posted by Steve at 17:56 No comments:

Some further work in progress.

First, the ongoing production line of rail fences. These are being based on some stripwood I bought that has bevelled edges (4mm thickness). The rocks are aquarium gravel and the posts and rails are made from matchsticks "roughed up" with a craft knife: 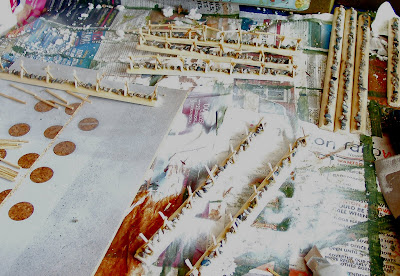 Some more fences here. These will eventually become picket-fences: 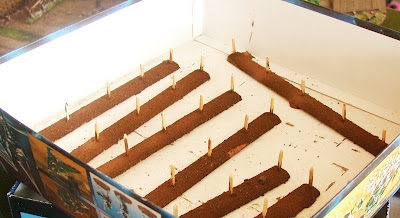 Here are some finished boards. All of the boards have patches of light flock in the corners so that they match up like geomorphic boardgame maps: 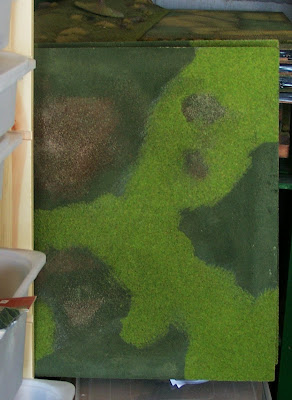 Here is an almost finished board with a small ravine carved in, filled with bushes etc. 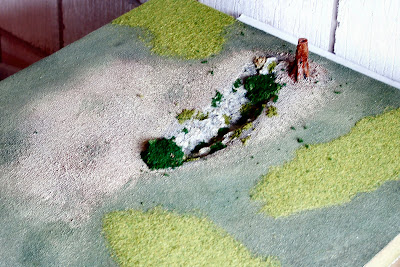 Lastly, the start of a board into which I am carving a river. The basic watercourse was carved out with a screwdriver and craft knife, then filled in with plaster filler. The rock faces are made with cork bark. I managed to buy a large piece of bark for £15 from my local petshop the other week. This is much cheaper than the small pieces you can get for model railways. It cuts quite easily with either a ripsaw or pullsaw. Still a LOT of work to do on this one. This is a corner-bend of a river, I might also make a straight piece. I did consider simply buying a ready-made river board from TSS, but I think they look a bit too artificial as the rivers don't wiggle around enough. 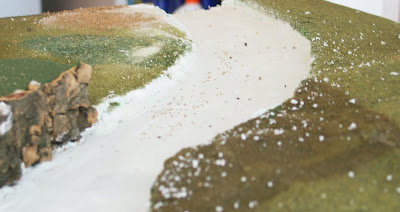