The Church at Aspern

The church at Aspern burned down at the Battle of Aspern-Essling, however it formed a key defensive position at the battle and I really wanted a model of it.

I stumbled across this resin version on the Magister Militum website. It is part of the JR models range (which includes the Essling Granary) but is listed as a small cathedral. Having compared it to contemporary paintings it looks pretty close.

I've given it quite a pale colour scheme as shown in some paintings, although it is possible that all, or parts, of it were more grey.

I have given the model a base of MDF with added Timecast walls and trees, big enough to accomodate one 60mm square base of troops. 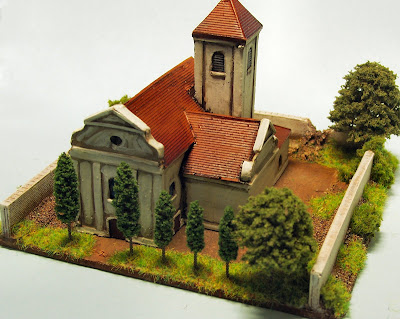 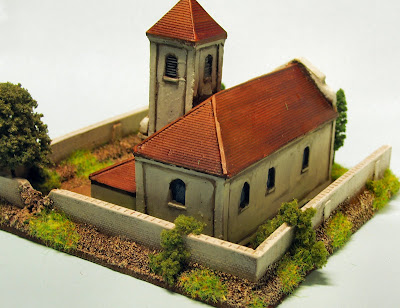 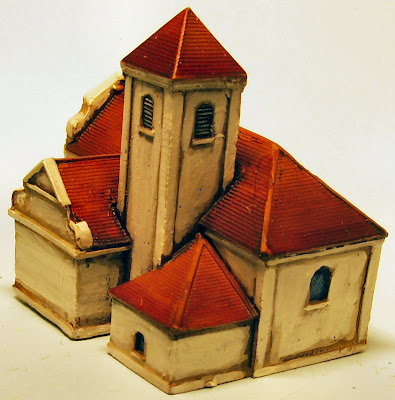 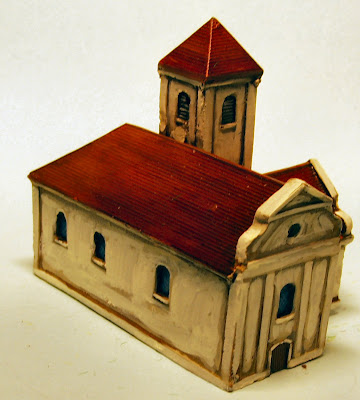 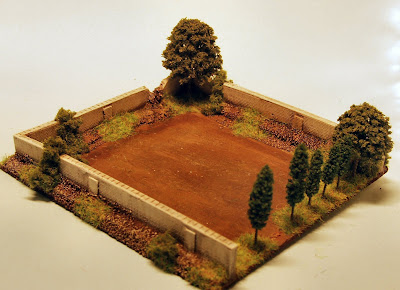 Just a couple of days to go to the small but perfectly formed PARTIZAN show at Kelham Hall. This means an early start to get tables set up for traders and gamers, but it is always worth the effort as we normally attract lots of great demo games and it is a chance to meet up with assorted wargames buddies from around the country.

I have my pre-orders in place for Timecast and Baccus, hopefully I will be able to pick up more buildings and bridges and some Prussians (early napoleonic) to morph into Bernadotte's Saxons. That should accout for most of my spending money, but I might look at the new Great War rulebook from Warhammer Historical.

Oh, on the painting table: a brigade of French infantry half-done, 2 ADCs and a small farmhouse. These should get finished over the weekend. Next up is likely to be 2 more brigades of French cuirassiers.

Cheers all, and if you are coming to the show; hope you enjoy it!
Posted by Steve at 08:42 1 comment:

Having been a bit lax on the update front, I will try and post something a few times each week to comment on progress with whatever I am doing.

My enthusiasm for the napoleonic 1809 project is still holding up. On the table at the moment is a lolly stick of 6 french generals/marshals that are half-painted. I have the figures for another base of French infantry ready to go when the generals are finished and the rivers in the garage have had another couple of coats of varnish.

I've thought about the rules and am sticking to only representing Corps commanders and generals commanding independent divisions. These are all on 30mm squares with either 3 or 2 figures respectively. At the moment, corps/independent commanders have a 3 number rating:
If a commander is killed in battle, he is replaced by a subordinate of lower ability (i.e. worse numbers)

Each army will probably also get a specific artillery commander to allow the formation of a grand battery by detaching corps reserve artillery.

I would like to do something more to represent the more outstanding divisional divisional commanders serving under the Corps command. I'm thinking of including "heroic leader" stands of 1 general on a penny base. The heroic generals would not be part of command & control but would offer combat bonuses. Heroic leaders would include the likes of St Hilaire (until he was killed), Lasalle (until he was killed)...hmm, being heroic doesn't sound too good. Oudinot as a divisional commander would be heroic (he was wounded about 40 times). Even the Austrians have a few (well I can find 2 anyway).

I'll have a think and playtest these ideas over the next few weeks.

Hello folks, as I promised I have been getting stuff done, just slowly and in bits and bobs. I managed to paint up 4 batteries of french foot artillery today. These went from undercoat to finished and based with just a couple of hours work. Nice.

Below are some shots of my terrain (work in progress). The rivers still need a lot more varnish and will have their banks modelled with long grass, flock, trees etc, but they are coming on nicely. 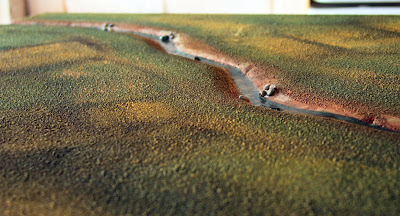 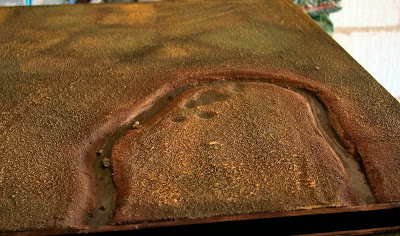 The board below is half of the Wagram hill. The other half is stacked behind it. 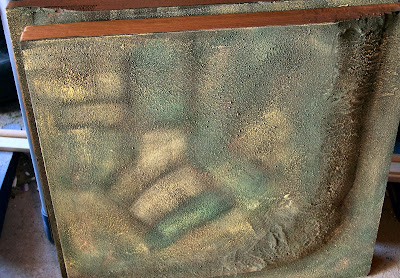 Here is a photo of the newly finished Hesse-Darmstadt troops. One base is the lieb-garde and the other is the lieb regiment. Each has 2 battalions of musketeers and one battalion of fusiliers (light infantry, green uniforms). Sorry this isn't the most clear photo. The figures used are French in bicornes for the musketers anf 1806 Prussian skirmishers for the fusiliers.

..and here are the Hessians in the battle line alongside some freshly painted and based French infantry and some (finally) based trees. The latter are on GW titan bases (60mm round).

...and finally...here is the Amazon order that arrived on Saturday morning. 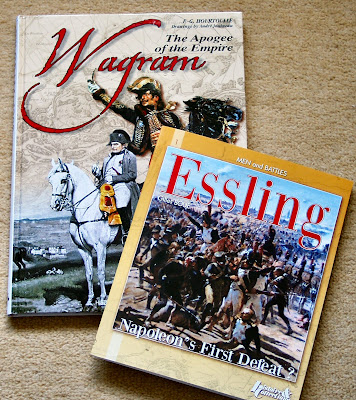 I've not had time for an in-depth read, but the colour plates and pictures in these two books are worth the cover price. The Wagram book has legendary poor translation, the Essling book is much better (a bit like an Osprey campaign book but woth more emphasis on the troops). Between these and Gill's new stuff, the 1809 campaign is getting to be very well covered for the wargamer.
As Dave W says, pip pip.
Posted by Steve at 19:12 No comments:

I saw this new Osprey-type book on the Battle of Aspern-Essling advertised on TMP so I have popped off an order to those nice folks at Amazon. I'll let you know what I think when it arrives.

This week has been busy. I have just about finished the two Hesse Darmstadt brigades. They just need their flags and basing. It'll be worth getting the ol' camera out then as I can also get shots of the recently completed French. After the lull of April I'm getting back on track. If I finish the artillery that I have primed up and 4 more bases of French infantry I'll be able to add Massena's IV Corps to the French army. I think I have enough already for Davout's III Corps (just lacking a bit of artillery) and the Imperial Guard. After this I think I'll do the 3 bases of French dragoons I need and then crack on with II Corps. This will cover the "big" french formations. The rest of the army consists of smaller corps and divisions which will, I think, make the painting a bit easier. My current feeling is that I'll try to get most or all of Napoleon's army finished before getting back to the Austrians.

II Corps should be fun to do. It was largely composed of part-formed 4th battalions and so each base will probably feature 3-4 small units rather then the two 24-figure units that I generally use. This will increase the number of flags and help make the corps distinctive on the table.

Speaking of the table, construction of the terrain boards goes on apace. I have all 14 boards for Wagram painted up. After a trial run at the club I concluded that they were too dark, so have been busy in the garage with green and yellow paints, drybrushing the hell out of them. The end result is a pleasing patchwork of fields. I'll try and get some snaps when I photograph the figures.
The rivers still need a bit more work, but it is definately coming together. The boards should also be fairly multi-purpose; possibly a bit too well vegetated for the Penninsula, but what the heck.

Partizan is coming up. Anyone going? I need to put in an advance order to Timecast for more buildings and bridges etc to collect on the day, and I might get some bits and bobs from Peter at Baccus. I alo plan on getting some small stand-alone hills to paint up to match the terrain boards. That way I can use them for Eggmuhl etc. That should see off the last of my pocket money :-)

Hi all. LAst few shots of games at Salute. I have had a busy couple of weeks. I have all but finished four more bases of French infantry and have begun work on four batteries of French artillery, some more generals and the two bases of the Hesse-Darmstadt division that was attached to Massena's IV Corps at Wagram.

The terrain borads for Wagram are about 80% complete. I just need to finishe the rivers with lots of varnish and add in bits of foloage and long grass. 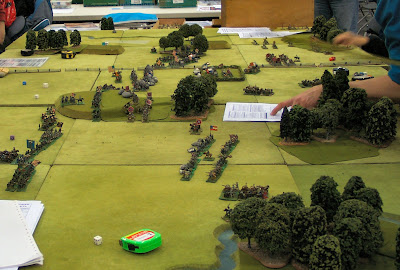 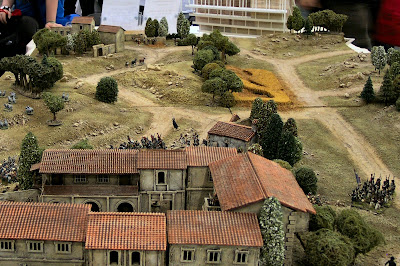 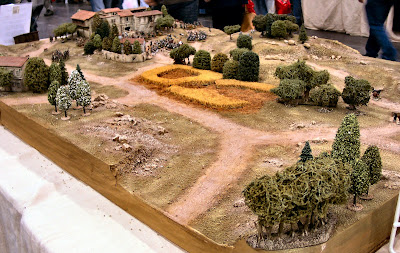