Just some quick photos of my AWI game and James's Abbyssinian spectacular.

Only shots of the set-up, too busy to take more photos later on! 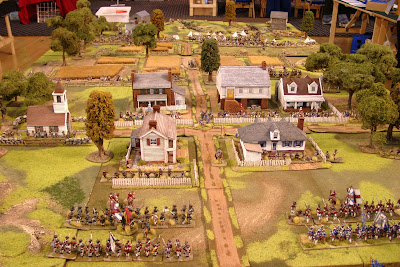 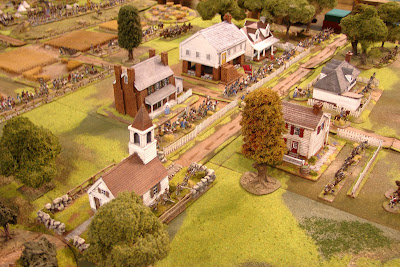 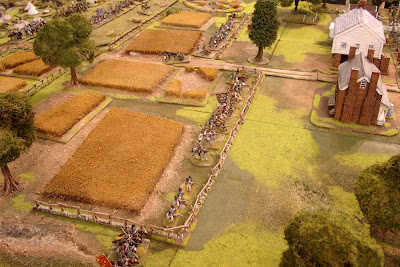 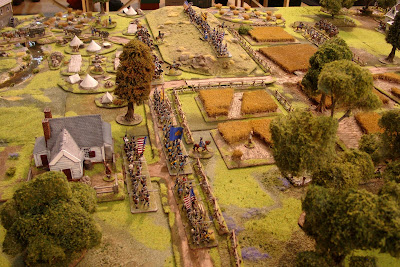 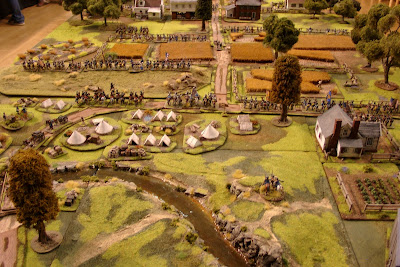 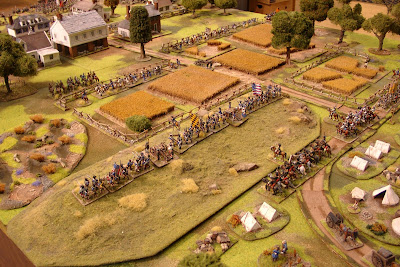 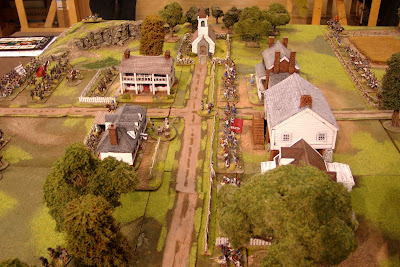 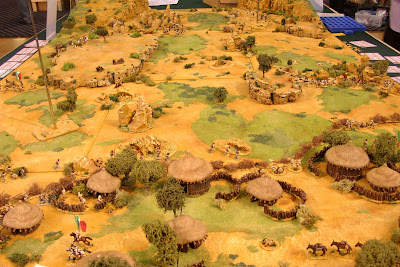 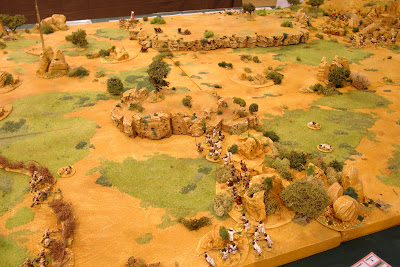 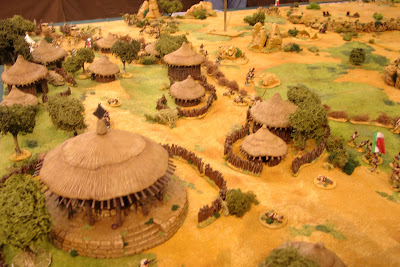 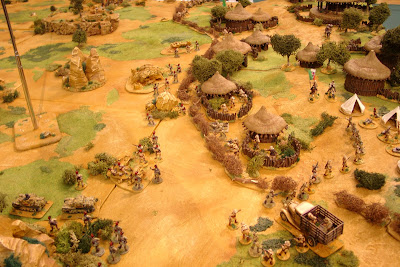 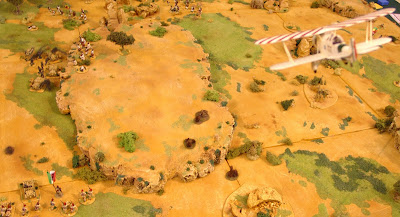 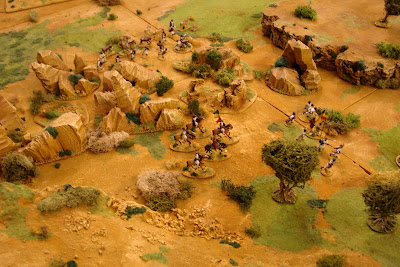 As the weather has been good I have taken the opportunity to enhance my collection of AWI buildings to produce a rather grand looking house suitable for a small town or a plantation in the souther colonies. Below is the finished frontage and the second photo shows they type of hovels building that forms the core of the structure. 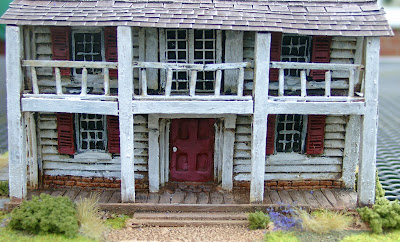 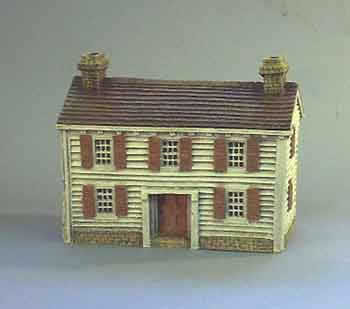 I have actually had this house for a very long time but haven't often used it on the table as it is quite a dull design and I was keen to add some bits and bobs to the basic house. As with most Hovels buildings the size is a good one for wargamers, having the right kind of "look" but without being too large. My house suffered from a noticable bowed front wall and many of the corners could not be described as square. This adds to the challenge of adding new parts as they have to fit around these problems!

The next photo shows how I have added a verandah and balcony to the front and a kitchen/extension to the rear, along with some groundwork to make the building look more "lived-in". The barrels are mainly from Hovels, along with one from Renedra. 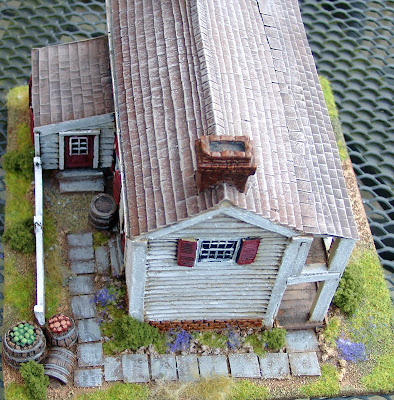 At the rear of the house is a piece of fencing, originally from the Hovels livery stable set but chopped down a bit. This is really useful fencing for this kind of project. A half-barrel has been added from the Renedra sprue. The groundwork includes static grass, clump foliage and some Woodland Scenics purple stuff. The path is made from rectangles of thin currugated card. 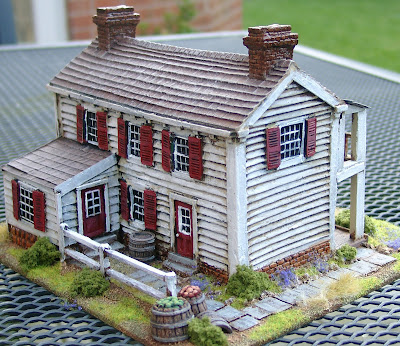 The rear extension was made from 5mm foamcore and the windows are cut from a fly-swatter. The roof of the extension is made of thin card and the exposed brickwork is simply made by peeling off the top layer from the foarcore and scoring with a biro. 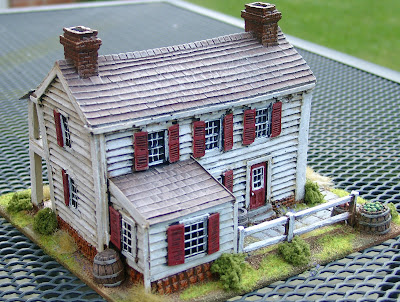 At the front I started with the floor of the veranda, which is a piece of foamcore to which I glued strips of thin card as planking. A similar construction produced the balcony and both were hot-glued to the building. The pillars are cut from foamcore and extra facing was provided by chopping up wooden coffee-stirrers. The balustrade on the balcony has been made from coffee stirrers, plastic rod and matchsticks. At some point this might get replaced by commercial balustrade, but it will do for now. The roof was added after much of the painting was complete and consists of some triangles of foamcore as supports, topped with a roof of thin card. 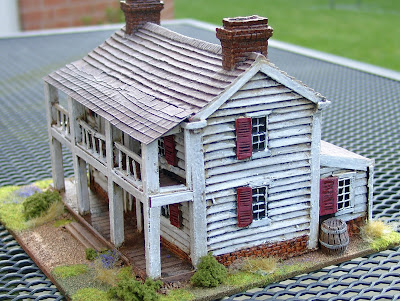 As access to the balcony is required by the inhabitants, I added a set of french windows. These were cut from a fly swatter and arranged in a construction of more foamcore, matchsticks and coffee stirrers to cover-up the original window and shutters. 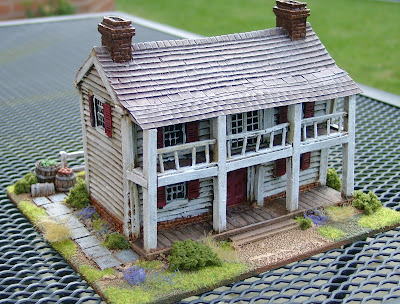 Overall I am really chuffed with how this has turned out. The balustrade isn't perfect but is easily replaced and it isn't possible to cover up all of the imperfections of the original - not least the windows which are really difficult to paint well. This will fit in well with my other buildings and will be added to the town on my table at Partizan in Newark next weekend.

Played a game of FonF at the club last night. I took the afghan police and had to withstand hordes of muj irregulars.

Very much enjoyed the game and have ordered a copy of the rules from Amazon. The might work well for the VBCW "little" project.
Posted by Steve at 13:11 1 comment:

We played a smaller game at the club this week. Sticking with the same rules we rolled out my old scenario for Montebello with 8 or so French brigades taking on around a dozen Austrian. The Kaiserliks have the advantage of numbers while Lannes's army has the quality and command...or so we thought.

The French had a great start, decimating one of the three Austrian divisions and sending Watrin's renforcements across the river to threaten the Austrian left and rear. With 3 game-hours remaining the Austrians had been pushed to their breakpoint but it was then that Lannes lost all ability to command troops. The second half of the French pincer first halted then withdrew, taking the pressure off the Austrians and removing all of the impetus from the attack. Watrin (me) tried to be too clever and attacked two cavalry brogades with the infnatry of his division, losing both combats when he probably would have won a single comabt by throwing in all three brigades. In the end the brave Austrians clung on for those last few hours, pushing back the last desperate attempts by the French to make the one last inroad they needed.

Austrian victory! Well done to Generals Anth and Paul. I'm sure Prince Darren and I will be avenged in the future :-)

Next week I think we are playing Force on Force.
Posted by Steve at 20:59 2 comments:

Then the two swamps (Last Valley originally) with their new paint jobs and additional foliage. Kirkwood's Delaware Light Infantry can be seen marching through:

...and in more detail below. These have also been re-based today: 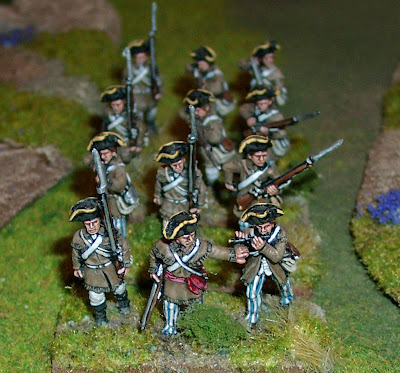 Lastly, my latest company of British grenadiers gets its feet onto a base: 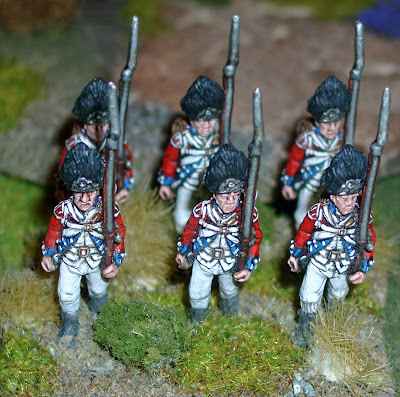 Hope you had a good weekend!

As I haven't yet bought any French let alone painted them, the scenario I have planned for them will have to wait. As an interim battle I spent some time this morning cooking up an alternative to Camden. In my scenario Gates falls back into North Carolina rather than facing Cornwallis and takes position near Charlotte where he is joined by Daniel Morgan, newly arrived from the North. Cornwallis, after securing South Carolina has moved north in late October, eager to bring the enemy to battle before the winter. Arriving in the vicinity of Charlotte the British advance guard report the enemy disposed in several lines. Cornwallis resolves to attack immediately...

In preparation for this I have been rebasing a couple of my older units and getting the nowly painted grenadier company ready for action too. I have also tarted up two old swamp terrain pieces with some fresh paint & flock and have made a start on a base-board for my colonial church.

We played napoleonics again this week at the club. We contined the experiments with refining the Paintingshed rules, by reverting to d6 for combat but adding the qulity of the unit to the roll rather than having multiple dice. It seemed to work well, but attacking is still very difficult (probably rightly so) and this means that everything will probably work better with fully thought-out scenarios.

Below, Napoleon himslef leads the Imperial Guard to sure up his left flank where the Bavarians are wavering: 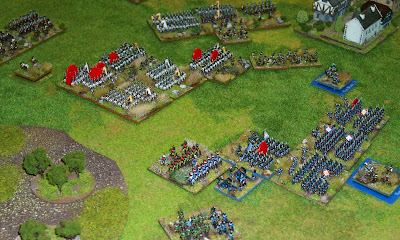 ...while in the centre, Oudinot's II Corps hold the line: 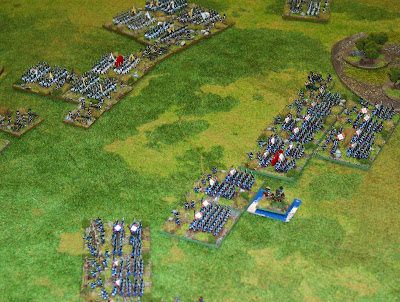 The least said abour Bessieres' heavy cavalry on the right flank the better...

Slight change of plan and I now WILL be putting on a demo game at Partizan at the end of the month (calm down Darrell).

I'll be using Black Powder to game an AWI battle and wondered of anyone out there fancied playing a turn or two or three on the day to help out. I don't mind demonstrating solo, but it in nicer to have some help!

As promised, some random shots of the game from last week:

1. The castle overlooking the battlefield. The curved stram around it was originally for the Geminde-Au adjoining Aspern village from my Wagram demo game: 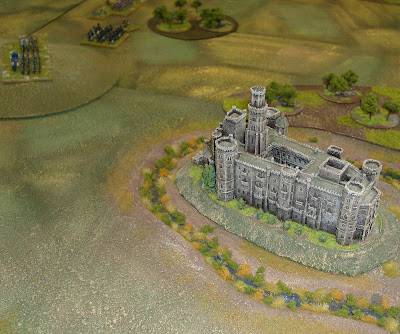 2. The massed ranks of the Empire square up against the thin red line on the hill: 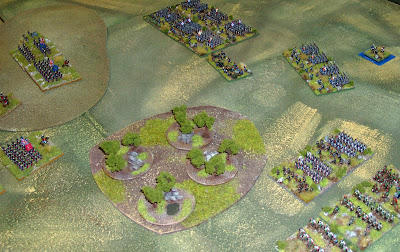 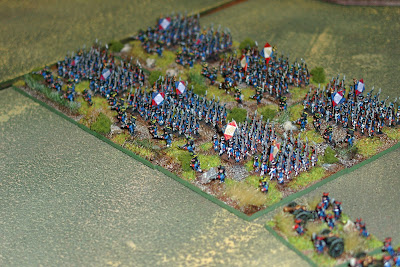 5. On the French left a Division of light cavalry and two regiments of Hesse-Darmstadt infantry set off on their march: 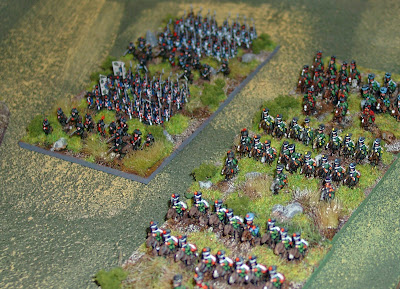 6. A more panoramic shot of the battlefield: 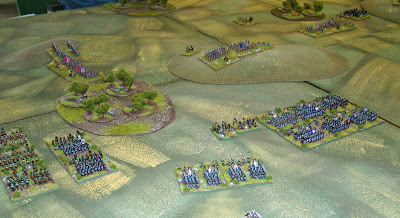 7: The Army of Italy commanded by Prince Darren of Newark, take on the Brunswickers but the conflict is bloody and will only be decided by a later flaning manoeuvre by the Italian Royal Guard and a brigade of French light cavalry: 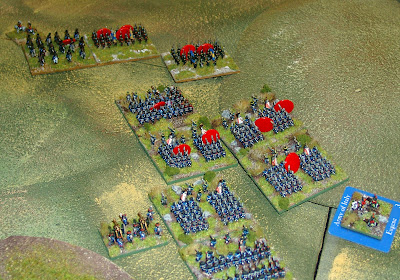 8. The KGL are forced back from their hill, while the Guards get squeezed on the flank:

9. A close up of the men of Hesse-Darmstadt, still in their Seven Years War-style uniforms (Baccus figures, painted by me)

10. A brigade of French light cavalry. Hussars in front [including elite company] and Chasseurs behind. (Baccus & me again)

11. The division of light cavalry played a significant role on the left flank, eventually making the Allied position untenable despite the brave defence:

Back to work tomorrow, but its napoleonics again at the club on Wednesday night!