Fresh off the painting desk is the next unit - Hartley's Additional Regiment of the Continental Army, or at least something to represent them. This is the earlier uniform, they later are reported to have switched to yellow facings. In view of this I gave them a totally speculative yellow flag.

I had fun converting the standard bearer from a minuteman figure. 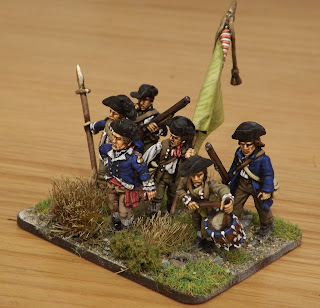 Inspired by the WI spread on Bill Gaskin's AWI collection I thought I'd add a new unit to my armies.
I originally painted a version of this regiment way back when the Foundry range first came out but they later were converted into the 6th Maryland for my Camden game.

So, starting from scratch here is a brand new version. Like Bill's unit it has a mix of uniformed and hunting shirt figures (and some in civilian dress), and no lace on the hats. Figures are a mix of Perry and Foundry. The wooden box is from Ainsty. The bases are from Warbases (they do them with rounded corners now!). The pieces of fence are made from a barbecue skewer.

First is the traditional view of the front of the unit:

Then the general's view from the rear:

A close up of the command stand. The flag is hand-painted. The finial is from Front Rank 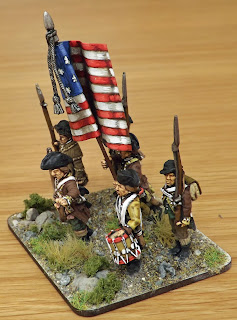 A view of the firing line: 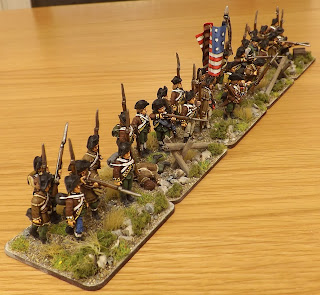