Hurrah, finally got round to taking some noew photos! Here is the start of my Napoleonic French army for Polemos, using Baccus figures, aiming mainly at the 1809 Danube campaign. The first two photos are of carabiniers and cuirassiers of Nansouty's heavy cavalry division

...and finally the start of an infantry corps. The artillery are on a 40mm x 30mm base, a little larger than the 30mm square in the rules, but I think it looks better so I am going with 40mm frontage for foot artillery and 30mm for horse artillery

On the table next are another 3 bases worth of french infantry and I have to finish the basing on a second brigade of light cavalry. The aim for the first phase is to get 9 bases of line infantry, 3 of legere (light infantry), a couple of artillery bases, the cavalry I have already completed, a bavarian infantry division and some bavarian cavalry finished. Then I'll think about the Austrians :-)

Back to work, back to studying has slowed down the blogging. This week I have been mostly painting 6mm napoleonic cavalry. Pics later.

I haven't lost interest in the crusades, but it is nice to have several projects to switch between, and no self-imposed deadlines.

cheers
Steve
Posted by Steve at 08:42 No comments: 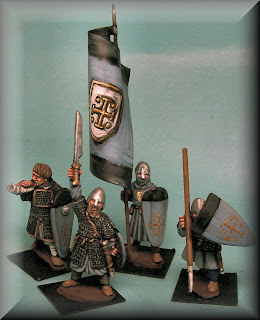 The flag and pole need finishing off, but they are almost done.

Just a catch up on the crusader progress...

First photo today shows the latest maounted figures to be finished. The blue & white chap will be the leader of a unit of similarly coloured knights, with the intention of this representing a conrois of cavalry belonging to a single household, in the same way as the first unit of knights I painted does. The other figure is likely to form part of a unit of secular knights with varied colour schemes. No weapons yet as I haven't decided what I want. The second guy (yellow & green) might end up as a standard bearer. 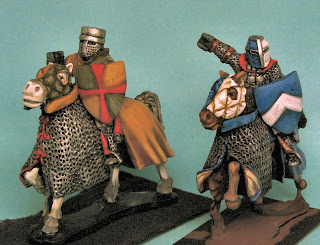 The second photo shows the beginning of my first foot unit, colour scheme based on the kingdom of Jurusalem forces from "Kingdom of Heaven". These are Gripping Beast figures from a unit pack of El-Cid armoured spearmen. The right-hand figure has had his round shield swapped for a heater-shaped one. This will happen to more figures in the unit to help them look more 3rd-Crusade-ish and less Norman/El-Cid. The cast on shields are total bum to remove, but the effort is worth it I think. 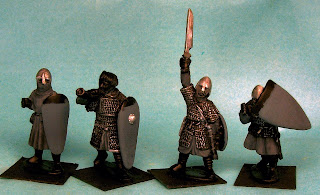 Hopefully the firt four will turn out OK. I'm giving up painting whole units at once. I find that 1-2 mounted or up to 4 foot is plenty to cope with at once if I want to maintain the quality of the paintwork.

cheers
Steve
Posted by Steve at 19:54 No comments: