In a productive weekend I've managed to fight a second battle!

Picture of today's game, with the Prisma filter "aqua" applied
Similar to my other recent games this was an intentionally small game with just four units and two commanders per side. The game saw my AWI forces deployed again and was inspired by Paul Leach's article from Wargames Illustrated #291 (January 2012). 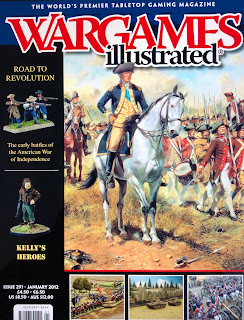 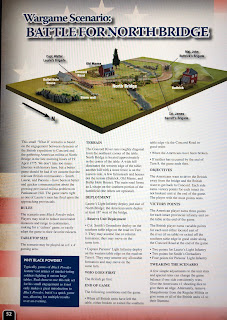 SCENARIO
The scenario concerns the action around the bridge to the north-west of Concord on 19 April 1775, the day the AWI began with "the shot heard round the world" on Lexington Green. British light infantry have pushed on past Concord and while the rest of the British force search the town for rebel supplies, some of their companies have crossed the bridge and headed further into the Massachusetts countryside. In the meantime, local militia are gathering in ever greater numbers to oppose the redcoats and there is a real risk of the operation turning into a disaster.
The table is set up to represent the area close to the bridge, but this is very approximate. The British hold the eastern side of the bridge with one light infantry detachment while a larger force has headed off-table and is expected to return soon. A small detachment of grenadiers will be available too. The rebels are able to deploy their entire force at the outset of the game. Numbers are equal, with the British having the slight edge in troop quality and the rebels having the better commanders on the day to balance things out a little. I have adjusted the OOB in the magazine article to give units of equal size:
British Forces
Lt. Col Smith (Quality 3)
Captain Parsons (Quality 3); entire force rolls to enter from turn 10 (see below)
Parson's force roll to attempt to enter the table beginning on turn 10. On this turn they require 1-6. If they fail then they roll again on turn 11 needing 1-9. If they fail then they automatically enter on turn 12. 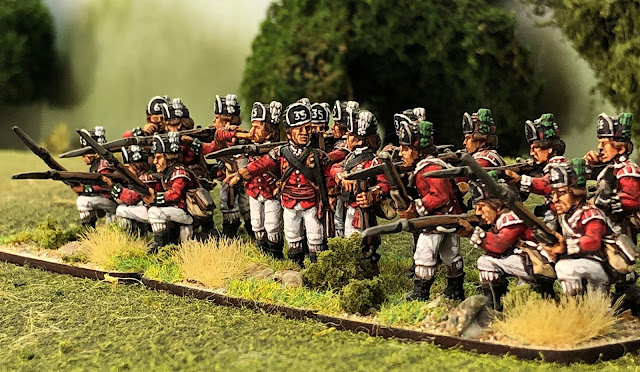 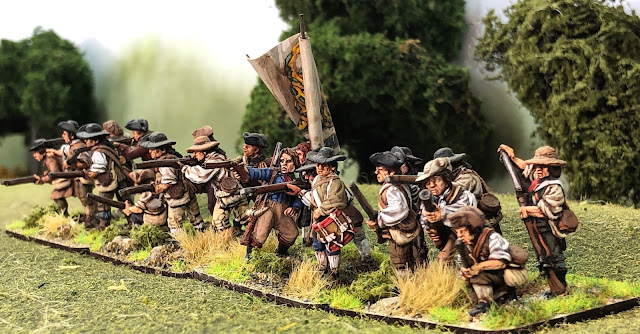 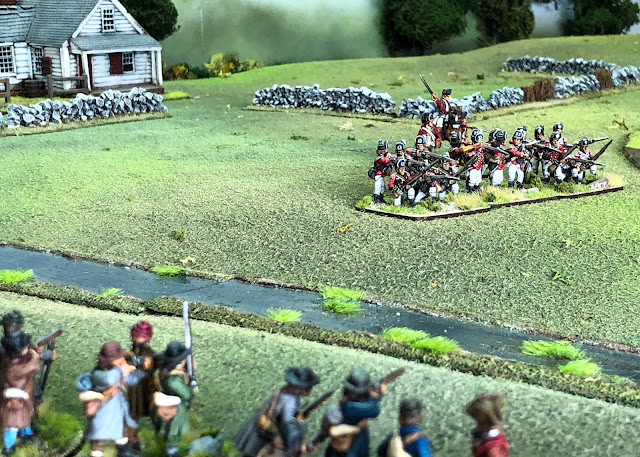 Smith's light infantry detachment hurried forward to the bridge to prevent any rebels crossing to the eastern bank of the river. The rebels hurry forward one unit of militia and one of formed minutemen to engage them with long-range musketry, while the second unit of minutemen move to their left to adopt a skirmish line and also shoot at the light infantry. 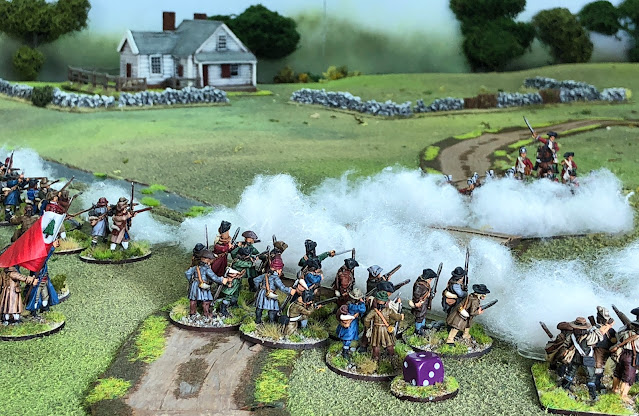 The light infantry losses slowly built-up but they held-on tenaciously and on turn 6 were glad to see a grenadier detachment arrive to ease the pressure: 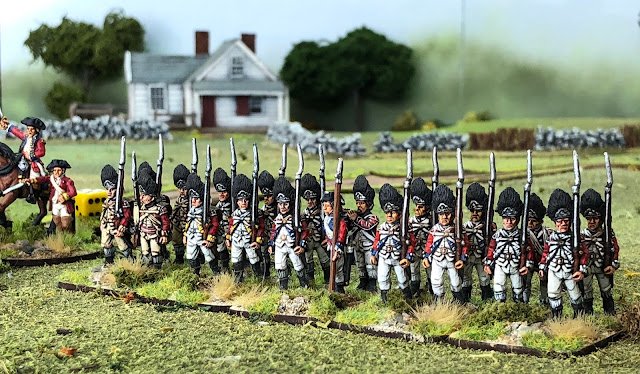 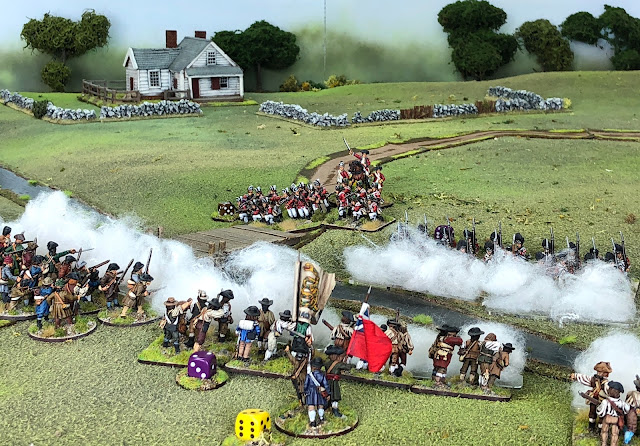 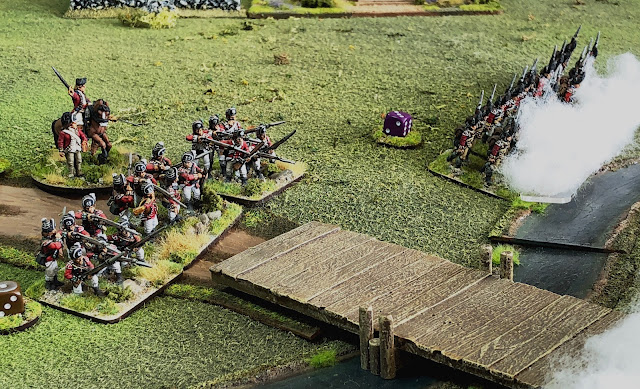 The musketry duel continued, with the presence of the grenadiers equalising matters and compelling the rebels to bring their remaining militia unit into the line. Again the attrition was not in favour of the British but they continued to cling on. Just as the rebels felt they were about to get somewhere a fortunate d12 roll saw Parson's redcoats arrive behind the rebels: 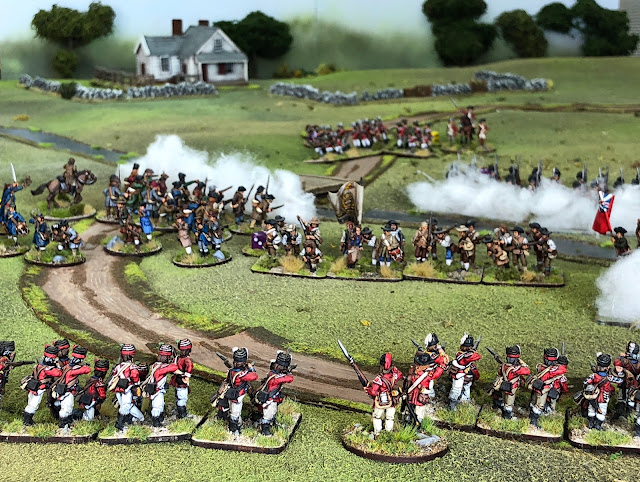 Parsons' arrival forced a rebel redeployment, and this almost stopped the light companies in their tracks. Judicious use of momentum points was required to support a bayonet charge that swept away one unit of militia, with a second following.
With the end of the game rapidly approaching the way to the bridge was almost clear: 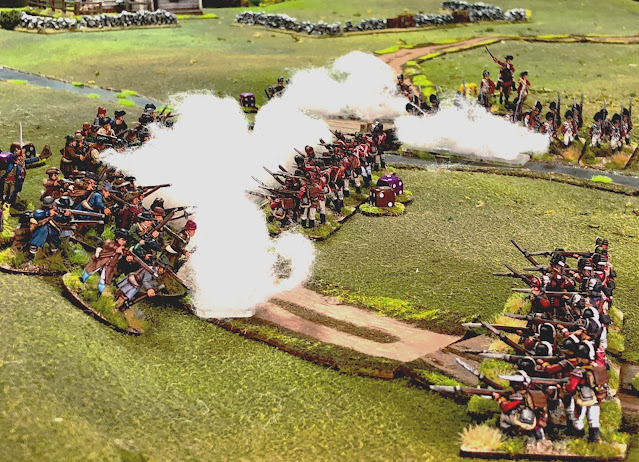 However the key British unit rolled the following activation dice: 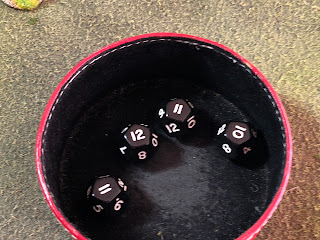 .
..and the resulting morale test saw the redcoats fall back meaning they could not shift the minutemen who were blocking their route to Concord in time... 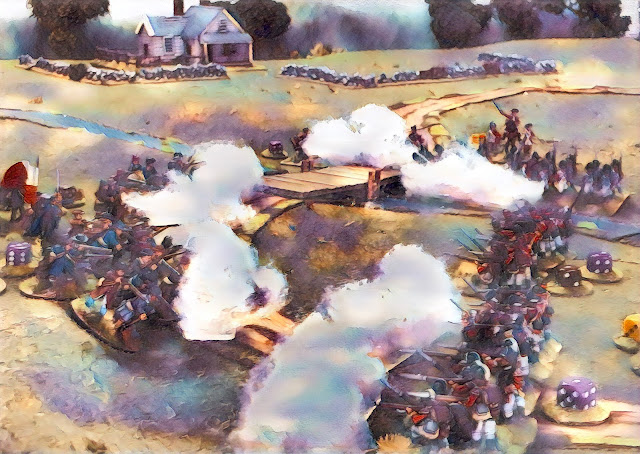 another picture of today's game with the "aqua" filter applied in Prisma
CALCULATING THE WINNER
The British gained 4VPs for having Smith's units in the right place, but gained nothing for Parson's men being stuck on the west side of the river. They also inflicted four stamina losses on rebel units, gaining an additional 4VPs. TOTAL = 8VPs
The rebels gained 6VPs for the two units of minutemen still on the table. They had also inflicted two stamina point losses on the British, gaining an additional 2VPs. TOTAL = 8 VPs
This gives a drawn result, which feels about right. Both sides had opportunities to tip the balance in their favour but it was not to be.
This was another successful test of the rules and another enjoyable game showing that you don't need to deploy huge numbers of troops on a large table in order to have a fun and challenging time (but large games are still great too!). The scenario would probably adapt quite well to other forces, either AWI or other periods and it would be interesting to see how varying unit and commander quality changed the dynamics.