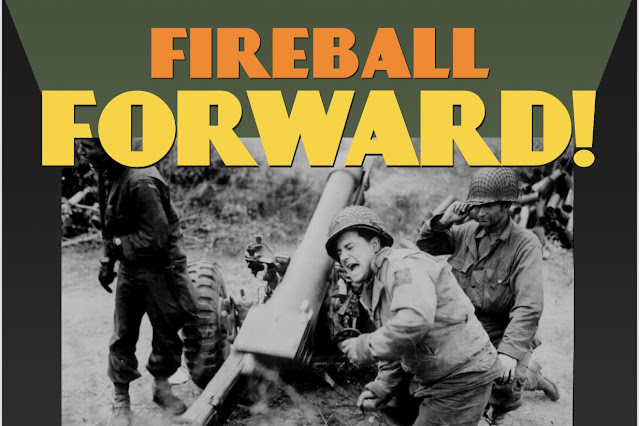 Following on from my previous post I thought I'd offer a few comments on my approach to Fireball Forward and some house rules I used in the demo game at The Other Partizan.

I don't really like playing cards in tabletop games. It's a personal thing, but I find them quite intrusive even if just on the edge of the table. My preference is to use MDF tokens drawn from a bag or bowl. Luckily I have a stash of suitable ones that I bought from Great Escape Games who make them to support their Iron Cross rules. I simply put one chit per unit (with the appropriate Allied or Axis marking) in a recepticle, draw them out an line them up face-down to create the order of unit activation.

As units are activated the chit used is placed next to them so that it clear who has and hasn't done anything in the turn. This also simplifies the rules as written, which use cards for activation AND on-table makers to show the order of unit activation.

This is further tweaked by the next house rule...

Ignore the "initiative chit" allocation from the rules as written, this replaces those and also provides for off-table ordnance support.

This is inspired (largely shamelessly pinched and adapted from) Chain of Command and O-Group. At the start of each turn, before assembling activation chits each side rolls six ordinary dice (6d6). 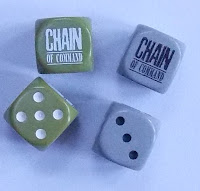 In experiments to date I have usually allowed each side to begin with two ASSETs. This element of the game adds quite a lot as players need to decide whether to go in early with an artillery stonk or two, but then be left unable to re-supply a Panther than rolls some unfortunate dice and has to skulk around looking embarrassed. It also feels more realistic that no-one "uses up" all of their off-table ordnance resources, as assets do get replenished as the game progresses - just very slowly if you have poor supply, or they may be diverted to meet other priorities.

If you have an ASSET (six accumulated resource points) then you can try to call in ordnance. This is done in the same manner as described in the Fireball Forward rules, i.e. a suitable leader needs to pass a morale test and you then roll on the artillery table. If the morale test is failed or the artillery table gives a suitable result, the ASSET may not actually be used - just follow what the table says.

This replaces the provision for artillery fire missions in the rules as written. I do really like the FF approach to off-board artillery as players don't have to make faffy decisions about calling in battalion mortars, divisional batteries, etc with due reference to flowcharts. Just let the dice decide. If you roll fairly low then it was probably mortars, if you roll double-six then division have done you a favour (or favor if they are US).

Not a new idea, but I find these far quicker to refer to than the tables in the book. I have put together ones covering the US and German armies I currently have and can easily add more. I used"Keynote" on my iPhone to make them, but MS-PowerPoint would probably work just as well. It's easy to set up a basic template then keep copying and adapting slides. These can them be exported as jpeg files and the images pasted onto an A4 playsheet for the scenario being played. I can get 10 or so onto a page of A4 which is usually all I need for one side's units. 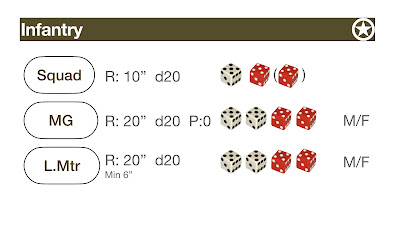 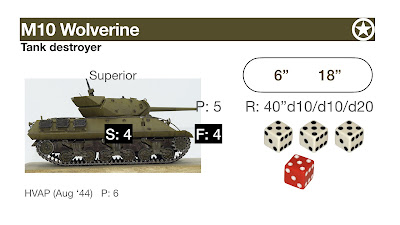 I would share these more widely but the images I've used aren't my own. One word of warning if making these yourself...I have my vehicles facing to the right as this works from the layout point of view, however in online searches the vast majority of images are facing left, which can be frustrating. It's my fault for starting with the M4 Sherman for which there is a huge choice of images. You have been warned...

That is it for now and I hope my ramblings make sense. The next step is to continue refining these and probably to add in some sort of extra random events process in that 6d6 roll at the start of the turn to represent air strikes, minefields, etc (rather like Battlegroup's chit system). There's no rush for this however. Hopefully my painting mojo will make a return soon too! 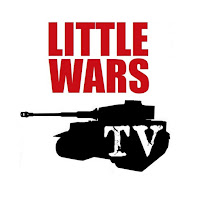 PS! The nice folks over at LittleWarsTV have just released a video of them playing a scenario set in Foy, Jan '45 using both Crossfire and Fireball Forward. So there is further confirmation that this slightly overlooked rule set is being played and enjoyed out there in the real world! They have a downloadable scenario of the Crossfire version in the "Free Stuff" section of their website, but not a FF one. As the rule sets have a similar scale this does give a decent start though. It's much more entertaining than their CoC Foy scenario was.