More testing and checking of recent rules updates and a few ideas I'm still floating around. 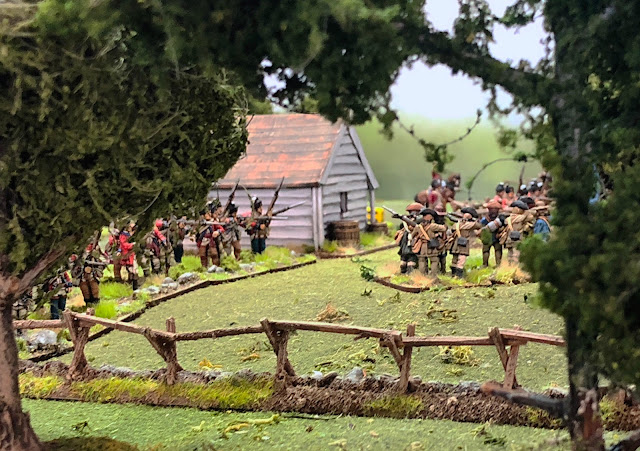 Retaining the same scenery as in my previous post, Morgan's riflemen and Dearborn's light infantry now faced Hamilton's brigade of four redcoat battalions emeeging from the woods into which Forbes's piquets had recently disappeared. They were heartened however by the arrival of the first elements of Poor's brigade in the form of the 1st New Hampshire Continentals and a battalion of Connecticut militia. 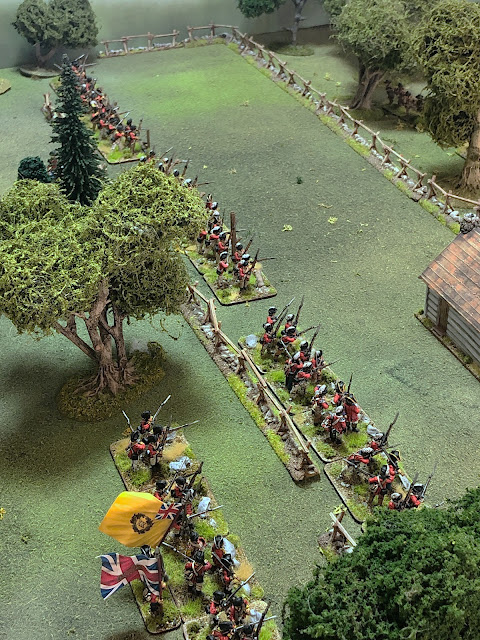 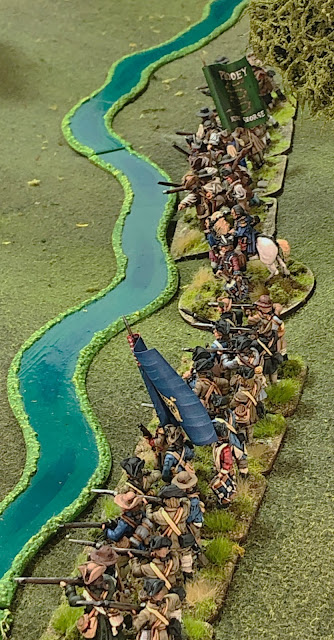 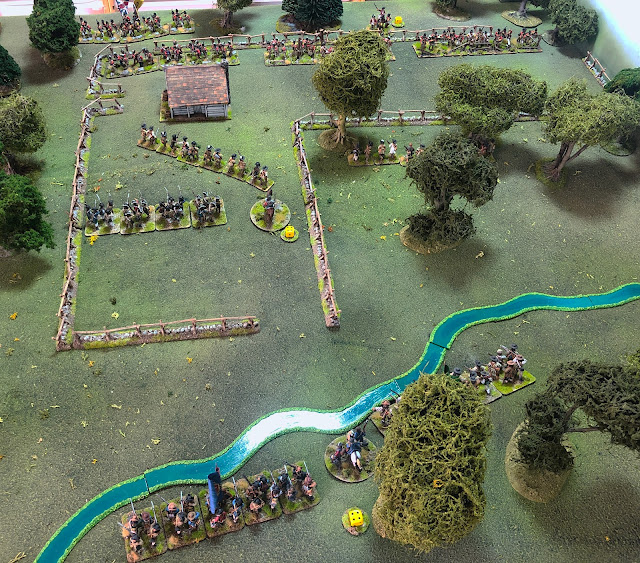 Morgan brought his own wing of riflemen across into the woods in support of Swearingen's wing, while Dearborn pushed his light infantry battalion up towards the 21st Foot near the farmhouse. Poor brought the 1st NH across the stream and fence, then paused to redress ranks while the militia moved into the woods behind the riflemen. Swearingen pulled his men back as the redcoats of the 21st and 62nd advanced, however the additional DP taken prompted a morale check and the riflemen ran back as far as the stream where they then began to reform. 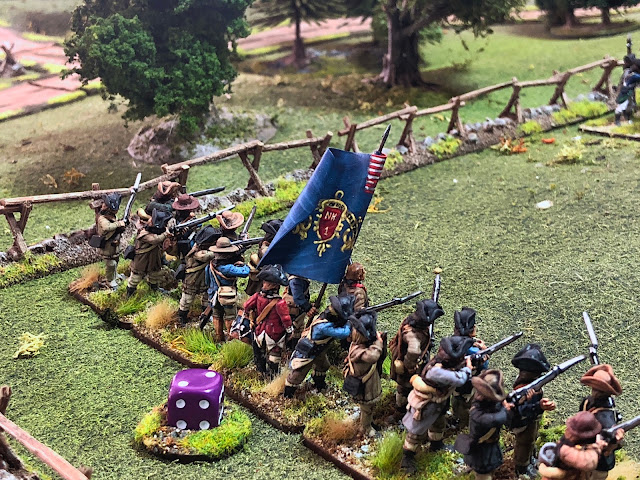 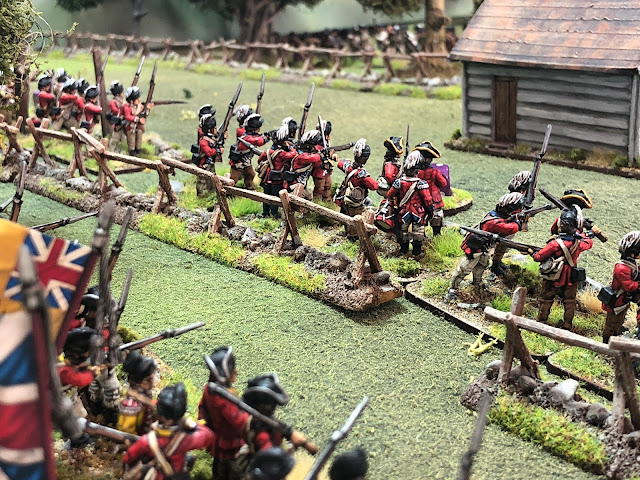 The British paused briefly to exchange fire with the riflemen and militia ("Phooey to King George", indeed!) in the woods before crossing the fence line to enter the green hell themselves... 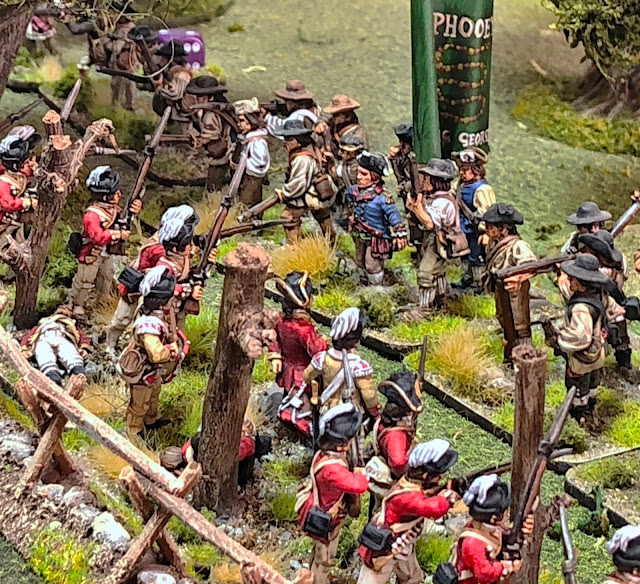 Meanwhile, by the farmhouse Dearborn and the 21st had engaged in a firefight for a few turns and the British decided to seize the initiative and charged. 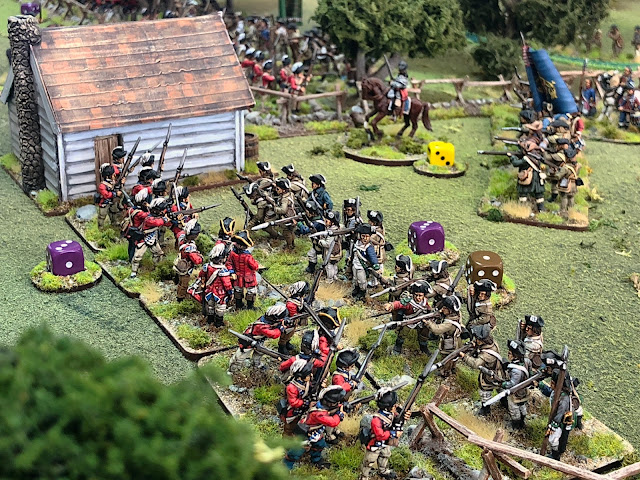 They made thier roll to close to contact and in the ensuing melee Dearborn's men routed having taken additional stamina losses. The 21st were not unscathed but for now they hold the ground. They do however face the prospect of the fresh 1st NH regiment moving rapidly towards them...
Both Morgan and Hamilton made use of their momentum points to attempt to skew fortune in their favour. There was not a great deal of conspicuous luck on display with only one attempt succeeding. Nevertheless the mechanism gives an additional role for commanders, encourages them to stay close to the action  and can add to the narrative feel of the game. I'm toying with some mechanism to "top up" momentum points through tha game to encourage their use but still limit them as a resource. Maybe add d3 to each army each turn, but this might be too much. I'll work on it.
All in all, a good hour or so spent with the troops and some more action is certain to ensue as the British seek to seize the woods while resisting the 1st NH who have the potential benefit of Poor's momentum points. Might be time for a few more reinforcements too! 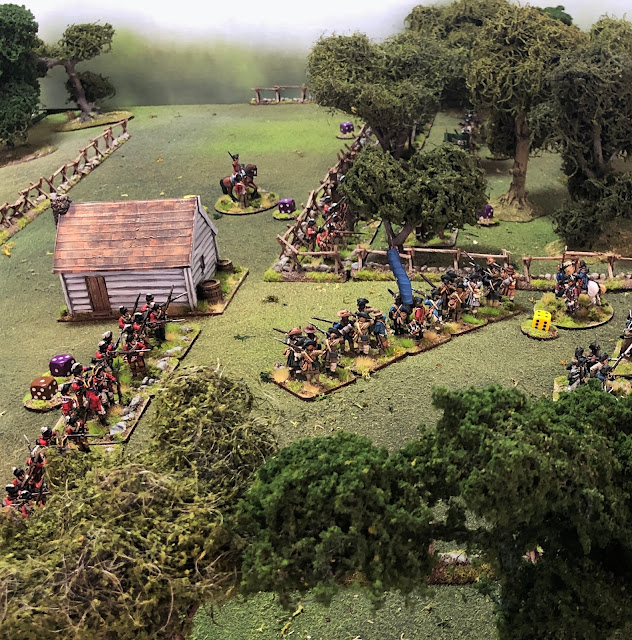 Rules thoughts:
If you are interested in this kind of discussion, I recommend the podcast by LittleWarsTV. They have some free to access episodes covering development of their own "Live Free of Die" rules that emerged from Andy Callan's "Loose Files and American Scramble" published in Wargames Illustrated #1 in 1987. I've found it fascinating to listen to development of rules with a similar philosophy to mine about the key elements of the AWI but using very different (and more traditional) mechanisms.
I do love a d12 :-)