This week I have split my free time between a small game and gradually adding to my collection of AWI militia. The latter will go onto round bases in groups of three as I build-up units with the aim of specific use in battles with a lot of skirmishing activity, such as Lexington/Concord, St Leger's campaign of 1777, etc. I have plenty of militia on rectangular bases already but I'd not rule out adding more of those in the future.

The game is based very loosely on the British Grenadier! scenario, but played with my Bloodybacks! rules. Clearly no set of AWI rules is complete without an exclamation mark. When I say loosely I do mean this.

The setting is New York, 1776. A battalion of British light infantry in two wings is advancing north along a road lined with stone walls and heavy logs amidst wooded farmland with fields similarly edged with hard cover. A battalion of Hessian grenadiers also in two wings is due to arrive along a second road than joins the main one. They won't arrive immediately though. The light infantry are accompanied by a detachment of Hessian jagers and a section of Royal Artillery 3-pounders. Opposing the crown is a small brigade of continental infantry consisting of three small regiments supported by a section of light guns and a few militia.

Commanders on both sides are of good quality, as are the majority of the troops, so this is set up to be quite a stubborn action.

Lt.Col. Musgrave (Q4), British light infantry (Q4) in two wings each of size 4 and density 5, Jagers (Q4) in one unit of size 2 and density 3, Royal Artillery (Q4) manning one section of 3 pdr guns

Below we see the view from the southern end of the table, close to the British entry point. The exit is in the north at the top of the table, just over a small wooden bridge. The expected Hessians will arrive from the road along the left (west) edge. Defending units are concealed behind walls and in woods.

Stone and log barriers are counted as hard cover. 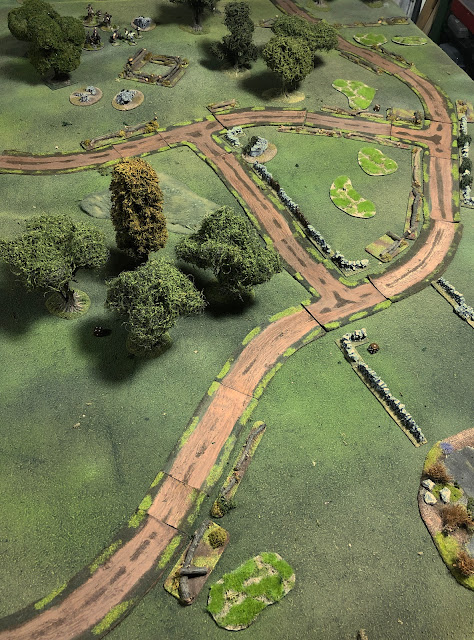 The British entered at the start of turn 1 and immediately came under fire from the militia skirmishers in the woods and from the 13th Continentals who popped up from behind their wall. The jagers chased off the militia and spent the majority of the battle in this pursuit. The leading light infantry wing was staggered and although it recovered to an extent the firefight with the Continentals was attritional and the stone walls gave the defenders a real advantage and in next to no time (well, about 30 minutes) the unit had lost 5/6 of its stamina and was going nowhere. 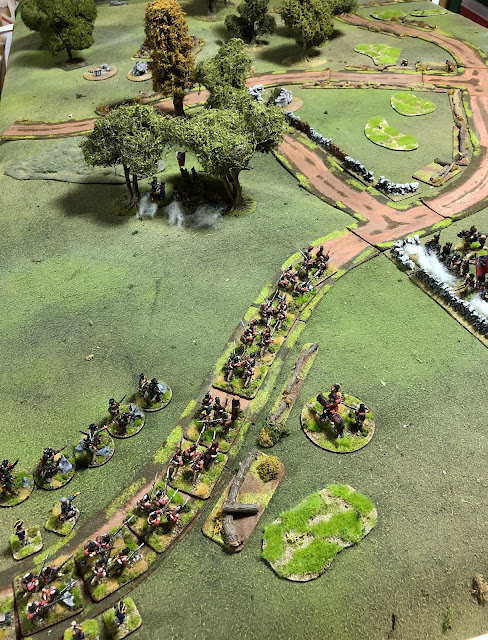 The second wing of light infantry was brought up to relieve the first, supported by the light guns. Between them they began to inflict losses on the 13th Continentals and seeing an opportune moment the light infantry charged the disordered defenders.... 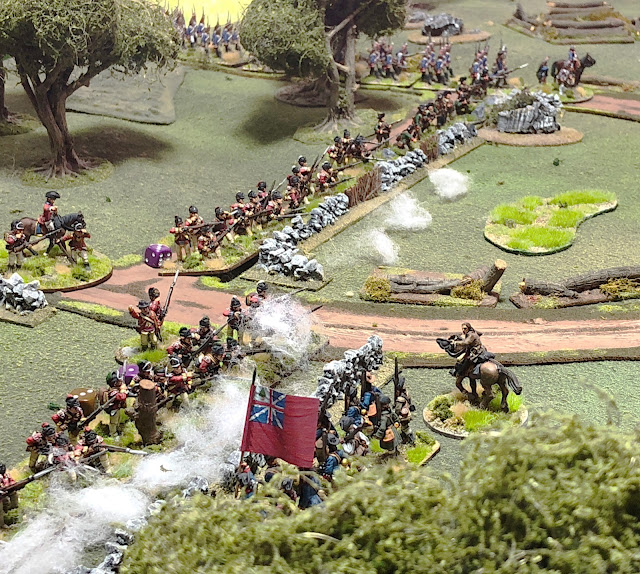 ...but failed to close despite having many factors in their favour. This left them exposed and taking casualties of their own so they retreated behind a wall of their own and let the artillery chip away until the 13th decided to pull-back.
In the meantime the Hessians had arrived. Huzzah! 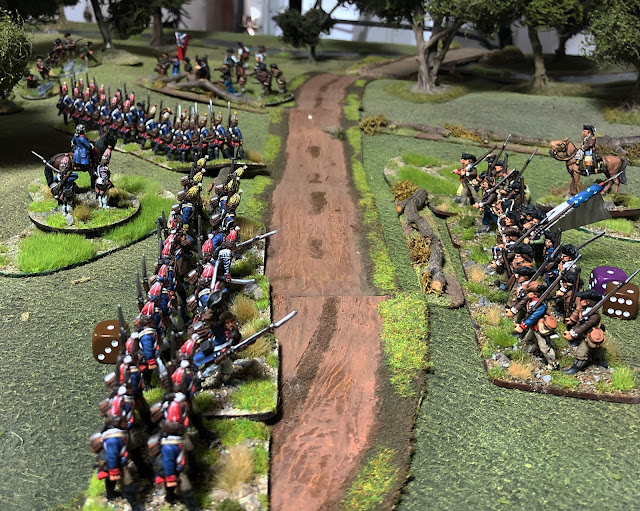 Von Linsing wasted little time and pushed his column up towards the road junction before shaking into line just as the 3rd and 26th Continentals were spotted, along with their supporting 3-pounders. Aware of how momentum can be lost by engaging in firefights the Hessians pushed on and hit the 26th to the front and rear, forcing them backwards but not breaking them.
Back to the south the badly beaten up first wing of British light infantry had recovered from their disruption and moved up, allowing the more intact second wing to move into the centre of the battlefield to occupy the attention of the 3rd Continentals before they could turn on the Hessians: 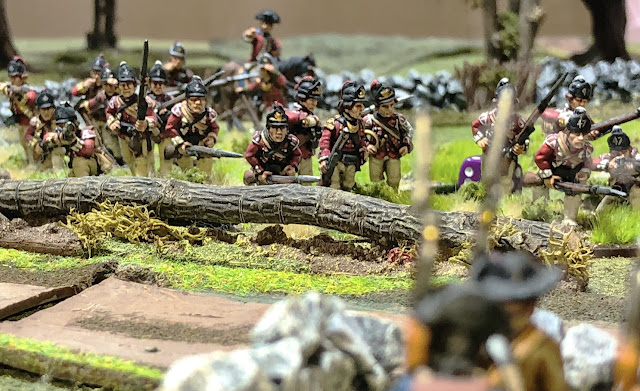 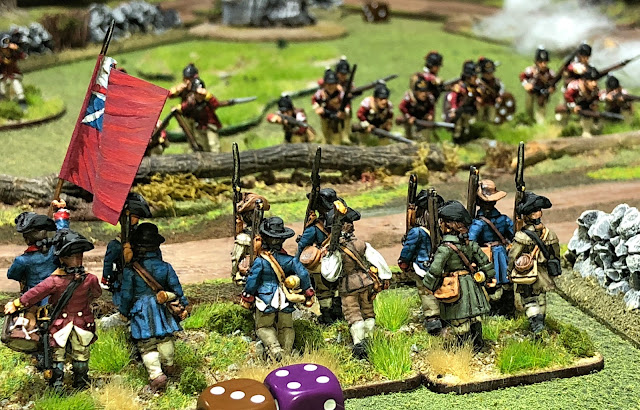 By this stage attrition was telling on the majority of units (purple dice). This and the preponderance of hard cover limited the opportunity for any heroic charges. With the Hessians making steady if slow progress the Continentals had little choice but to withdraw before being totally cut-off from their means of exit, conceding the field but having dealt a battalion of British light infantry more than a bloody nose and proving what stubborn and effective opponents they could be when under capable leaders.
The rules worked well and gave a flowing game. My only thought is to give rifle armed troops some kind of small modifier when shooting. Limiting them to "long range" at all ranges works well to reflect the slow rate of fire and vulnerability to being charged, but I think they need something to reflect their extra accuracy. So I'll try out a +2 modifier to their "to succeed" number if shooting, but still limit them to 3 dice when shooting so their maximum possible effect is still 2 hits. One thing you find is that the long range of rifles is of very little advantage when there is lots of cover about (i.e. across most of North America in the C18th!)
Now, about the new militia...
I'm painting up 30 or so figures, mostly Perry northern militia with a few Foundry minutemen in the mix. I'm dong these in batches each with a different "main" colour. The first few are shown below: 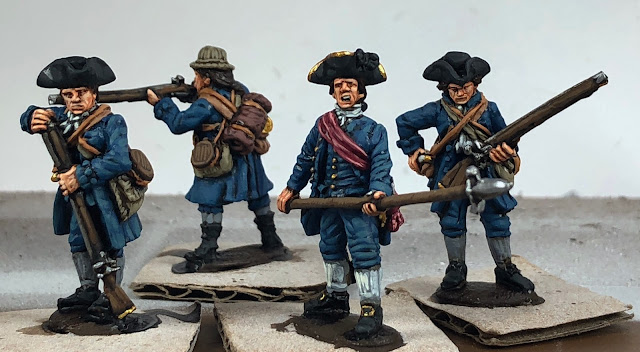 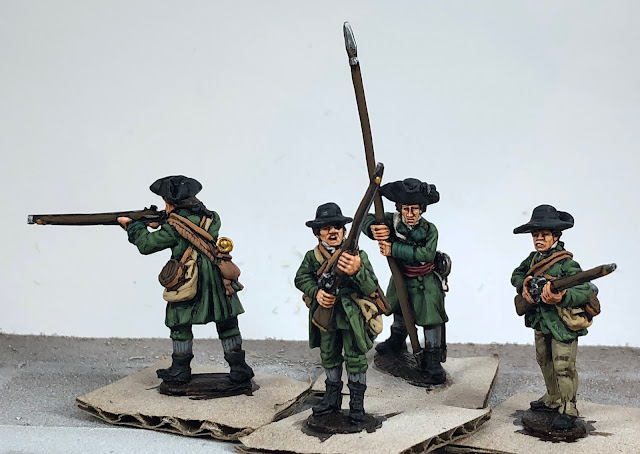 ...and that's it for today. Have a great weekend.