It's been a while since I last posted about my 20mm WW2 games. In the last few weeks I have been toying around with some ideas for rules and have filled a gap in my US collection for Normandy with the addition of a couple of M10 GMC tank destroyers.

Taking a look at the models first: 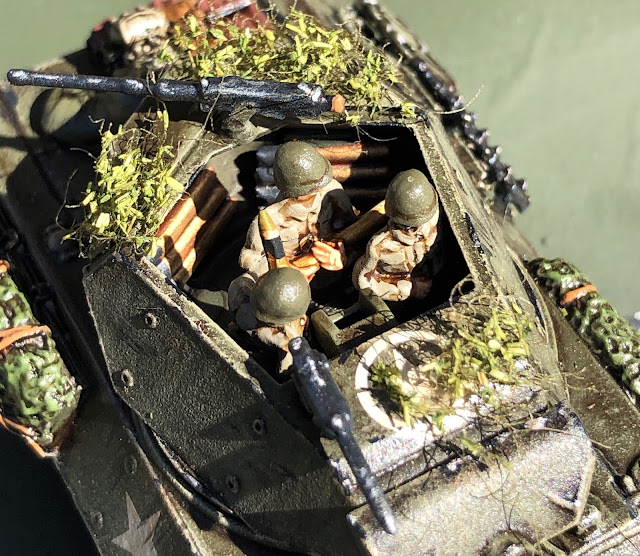 These are 1/72 Armourfast models, which are cheap and cheerful but benefit from putting in a bit of extra work. I have added stowage and crew from S&S along with tools from SHQ and some cammo scrim from Army Painter. I also created the impression of spare shells in the rear of each turret compartment using lengths cut from a spare metal spear.
There's still some particularly "basic" aspects to the models, especially the tracks and the machine guns where just a little more detail would be nice, but overall these are OK for wargaming and fit in alongside my PSC Shermans without requiring a huge amount of time or modelling skill. For the 20mm gamer there isn't much choice anyway. It is either Armourfast, much ore detailed plastic kits or metal vehicles.
Rules ideas:
At the moment I am happily taking the bits I like from other sets (Five-Core, Bolt Action, Battlegroup, Chain of Command, etc) and adding in bits of my own. The aim is still to get that "Squad Leader/ASL" feel without too much complexity. A bit of a holy grail and even a contradiction in terms (uncomplicated ASL!! :-) ). Game size is a platoon to a company a side, with fire teams or individual vehicles as the smallest units of manouvre.
Each player's game turn alternates with their opponent and begins with a 1d6 roll. On a "1" we have a firefight: everything can rally/shoot but not move. On a "6" we have a scramble and everything can rally/move but not shoot. For rolls of 2-5 that is the number of units who can act (rally/move/shoot), plus an extra order for each officer on the table. So we have bits of 5-core here with a Battlegroup twist.
Infantry move 6 inches per turn and can then shoot or move an extra d6. Vehicles haven't quite been finished yet but will probably be something like the CoC system.
Fire teams generally have 4 figures, and if casualty reduced they drop to 3 figures. Further casualty reduction destroys the team.
Infantry shooting uses a mechanism of my own involving a hand of coloured dice to generate a range of effects without too many modifiers. It sounds a bit complicated but after a few rolls it starts to become quite quick. Present system is:
1d6 (red - spotting): need 3+ to spot target in open, 5+ to spot target in cover/obscured, -drm if shooter moved, unless armed with assault weapons such as SMG or Garand M1.
1d6 (colour - machine guns): if a MG shooting: need 6+ for LMG, 5+ MMG, 6+ HMG to score a hit
3d6 (white - "to hit"): extra d6 for each additional fire team forming a fire group up to a max of 5 dice. To score hits need: Open target: 2+, soft cover (hedge, trees) 3+, medium cover (wall, wooden building) 4+, stone building 5+, concrete structure 6+.
Rifle team range 36", MG team range 72", SMG team range 12" (probably. I haven't tried SMGs yet)
If the target is not "spotted" then 2 hits will pin it and 3+ hits break it
If the target is "spotted" then 1 or 2 hits pin it, 3 break it and cause casualties
Broken units will rout (rather like ASL or 5-Core). They rally if given a subsequent order or in a firefight/scramble turn, by rolling 3d6. Scores needed are: inexperienced 5+, regular 4+, veteran 3+. These scores are improved by one if in woods or a building, They are further improved by the presence of an officer (company commander, etc). zero successes causes casualty reduction, 1 success is no effect, 2 successes changes "broken" to "pinned" and three successes causes a return to good order.
Recovering from being pinned is similar but only roll 1d6. Fails stay pinned, successes cause a return to good order and the unit can act immediately.
Broken and pinned units can't do anything and are at a big disadvantage if assaulted. Assaults currently use the 5-Core mechanism which is quick and effective but might get tweaked a bit. It certainly makes assaults on buildings a realistic possibility for the attackers IF they can get close enough and pin or break the defenders with firepower first.
So far all of this works well and rewards fire and movement well, provided you take your time. An attacker under time pressure might be forced into something "courageous"!
I do have mechanisms for ordnance/AP shooting by/at vehicles, with a lot lifted from Bolt Action for now. Shermans are very cautious around German AT guns!  Still working on onboard and off-board HE systems. Will work on light mortars first...
Lots more potential for fine tuning, but this is the progress so far.