June 30, 2020
As part of assembling a force for the Battle of Hubbardton I have painted a few Brunswick grenadiers. Only 80 or so of these were present, towards the end of the battle, deployed as bayonet support for the Brunswick jagers. The phots aren't quite as good as normal. I have a new desk lamp that I can't quite angle in the same way as the old one so I'm still experimenting with the best set-up.

I have painted these as grenadiers of the Rhetz Regiment, although I've no reason to believe it was specifically that company which was deployed on the day from the provisional grenadier battalion. I just liked the white facings.
As these may need to skirmish I have mounted them on half-depth bases (35mm x 25mm)

The figures are from the Perry Miniatures Hesse-Cassel Grenadiers Charging pack and the associated command pack. I don't really need all 12 figures for Hubbardton but they looked good like this on the workbench so I painted all of them.
I think these will be the only Brunswick grenadiers that I paint for the Saratoga project. For larger battles where the whole battalion was present I will use my Hessian grenadiers (I have three battalions) as proxies.
This more or less finishes what I need for Hubbardton, although I'm tempted to do some ragged bases of Continental "stragglers and wounded", so we will see. Other than that I can now get on with planning the game, finishing off the Hesse Cassel Lieb battalion and then making progress on the outstanding units for the Eutaw Springs OOB - yes my paintbrushes are heading back down south.
AWI painting Saratoga

Delta Coy said…
Great paint job, the Perry figures come up very nicely. I also use Perry Hessians both for the American Revolution and for the Seven Years war with different command bases & flags. Cheers Greg
1 July 2020 at 08:29 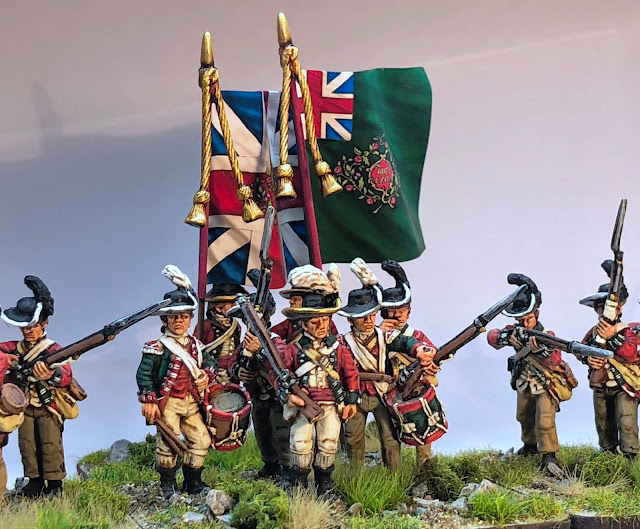 I’ve noticed that I’d overlooked posting pictures of the final British unit for Eutaw Springs.  The 63rd fought as a whole or in part in a number of southern battles. While I only need 8 figures or so for Eutaw, I have painted a 20 figure unit to allow for use elsewhere. These are Perry British figures in cut down coats from the firing line and standing command packs. Flags are from GMB with finials from Front Rank. Bases are 2mm MDF from Warbases. 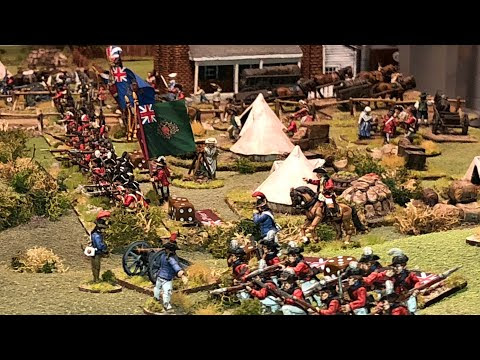 Yes, sadly another planned Partizan show in Newark can’t go ahead due to infection prevention measures still being in place. So instead of being there with a table, terrain and model armies I have again produced a “virtual” demonstration game, this time of Eutaw Springs. As with all good demo games it includes background material to explain things as well as lots of video and images of miniature warfare (and lots of cotton wool too!}.  As with the Hubbardton video I produced last time, please tell me what you think. While I look forward to getting back to real shows I’m also considering keeping going with the videos both as stand-alone items and also to supplement and preview physically presented games.  Here it is then, Eutaw Springs. The culmination of 32 years of planning! I hope you enjoy it. Stay safe!