February 26, 2017
Hi. It has been militia-a-go-go this week.
Mostly new painting but also some renovation of older figures from the class of 2001. There has been a mix of gun crews, commanders and rank-and-file militia.
Below is the output so far, awaiting basing. Most of these will be used for the 300 or so troops defending the rebel right flank in Charlestown.

A close up on militia gunners. These will operate a 3-pounder section: 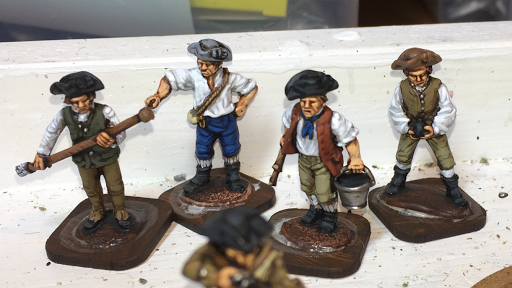 Command stands. The chap with the "Liberty" glad still needs his pole and finial finishing off. The flags in these cases are hand painted but I'm sure GMB do some great alternatives. The command figures include some repurposed uniformed chaps. I've simply painted them in drab colours and made lapels and cuffs the same colour as the rest of the jacket. There's a lot of colours here that are more often seen on WW2 figures, such as german cammo beige. 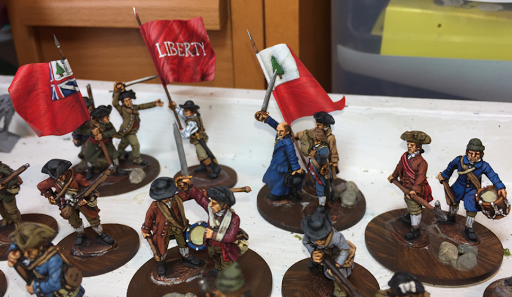 Lastly, another flag on the go. There's not much to go on regarding rebel flags at Bunker Hill and possibly none were flown at all. If they were then red seems the most likely colour and the pine tree emblem might have featured. Red is also a good "rebel" colour and fielding an army with no flags seems a bit dull.
I'm experimenting with these flags. They are paper like usual but with a core of kitchen foil. I'm not sure this adds much but they do seem to fold a bit more easily and hold their shape a little better. 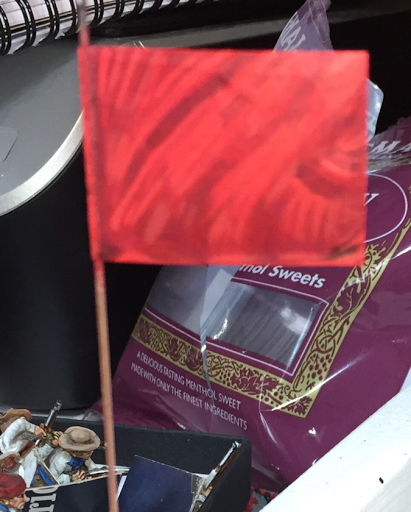 Terrain-wise the beach sections are about done and next weekend I might get the opportunity to clear the table and set everything up for the first time to get a feel for what still might be missing.
See you next week.
Don't forget the Hammerhead show in Newark, Notts next Saturday (4th). Not sure if I'll make it yet - I might be busy clearing the garage and table!
AWI Bunker Hill painting