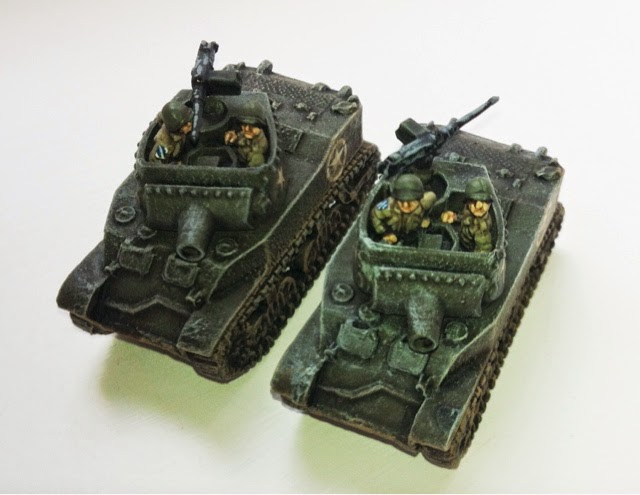 Here are the two M8 HMCs I have painted up to support my US late-war infantry.
Quite nice little vehicles but these Battlefront models lack the fine definition of detail on the resin hulls that their earlier models (or plastic models) have.
With some conversion I suppose the turrets could be used on hulls from the PSC stuart tanks, but you would need to replace the bow MG with a second vision slit/hatch. Overall I'm not fussed enough to bother!

At least one of these is likely to grace a Chain of Command game in the near future.

The overall paint scheme is a 50/50 mix of US olive drab and US dark green (Vallejo). I'm not sure that this is absolutely accurate but it seems about right.
Weathering is as follows: drybrush with Anita's sand, then drybrush lower down with Anits's coffee then wash the lower details with GW agrax earthshade mixed with a little bestial brown. I find this "reverse" method of starting with the lighter/drier colours working to darker and wetter gives the more realistic effect.
15mm WW2 WW2