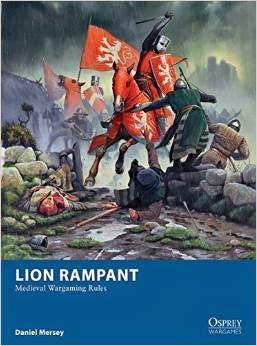 The latest rule book from Osprey Publishing dropped through the letterbox this weekend. Lion Rampant is a set of medieval large skirmish rules written by my chum Dan Mersey. Dan's previous rules for Osprey were Dux Bellorum which remains one of my favourites.

Lion Rampant looks excellent. I have avoided medievals in the past but these look sure to start a project or two. Most likely seems to be Glyndwr's revolt with late C13th Welsh vs English/Flemish forces or an imagination Italian Wars setting with two rival city states pinching each others taxes and raiding each others borders.

The former project will probably wait upon the Perries releasing their HYW plastics, the second could be done with the WOtR and European Mercenaries Perry plastics.
...and there are also those 3rd Crusade figures I started and never finished...
Lion Rampant Medieval