My latest units are all painted and based.

The South Carolina Royalists were a loyalist infantry unit that later took to horseback.
These are all Perry figures from various packs, including militia in shirtsleeves and uniformed militia. The command figures are the pack in cut-down coats and the officer is a plastic figure.
Flags are conjectural and hand-painted, with finials from Front Rank.The photo has blurred the tassels on the King's colour, they look a little better "in the flesh". 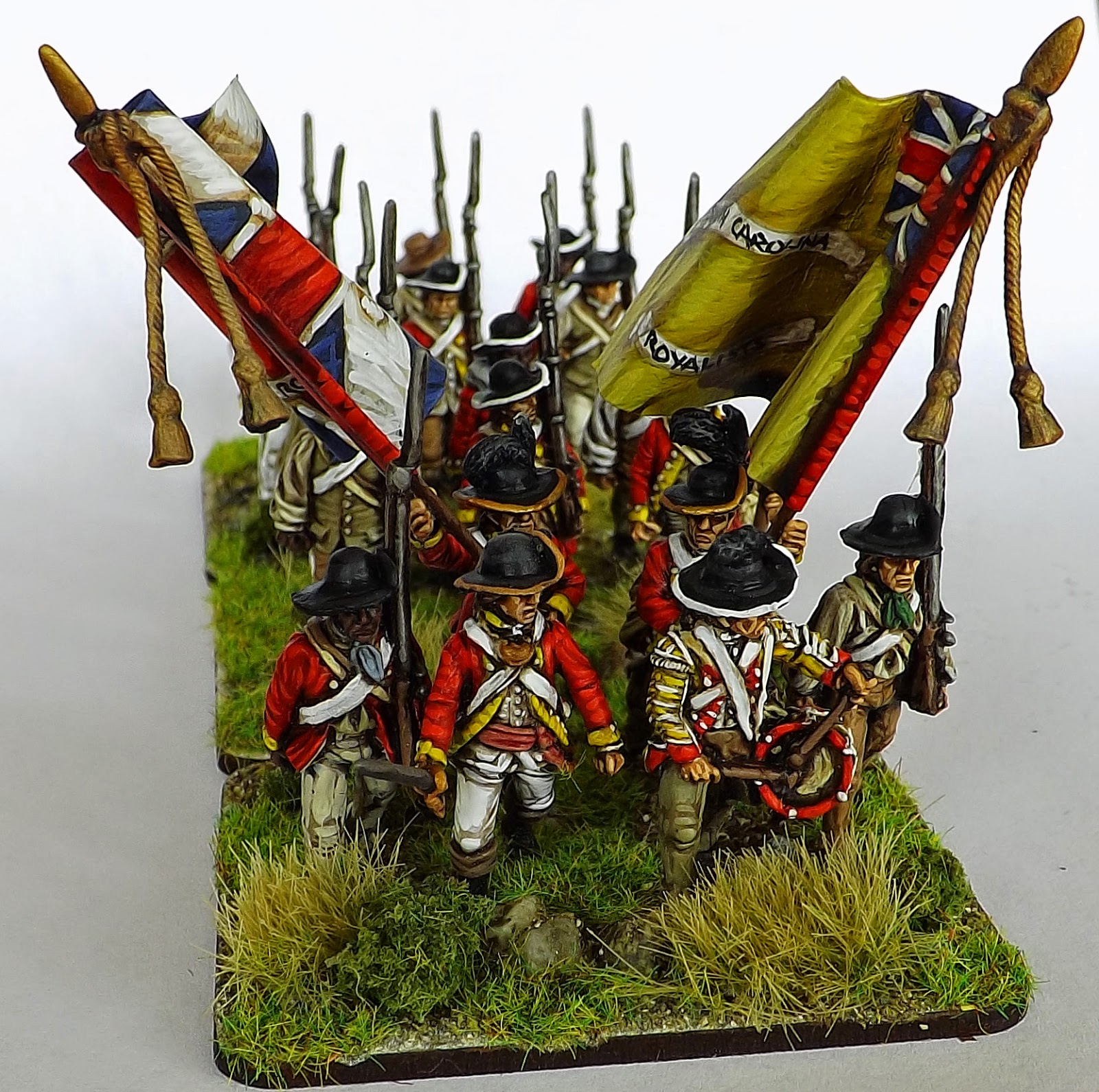 And here are the NY Dragoons I posted about a while ago. These are the Perry figures from the 4th Continental Light Dragoon packs, painted as loyalists. I believe these were a part of the New York Volunteers. I painted the infantry with buff facings but the cavalry with the blue facings that the unit may have adopted as the war progressed. I reasoned that the horsemen would be a bit dandier so I could justify them acquiring new uniforms before the foot-sloggers. The cavalry were commanded by Major Coffin and I presume are the same mounted unit as seen later on at Eutaw Springs. 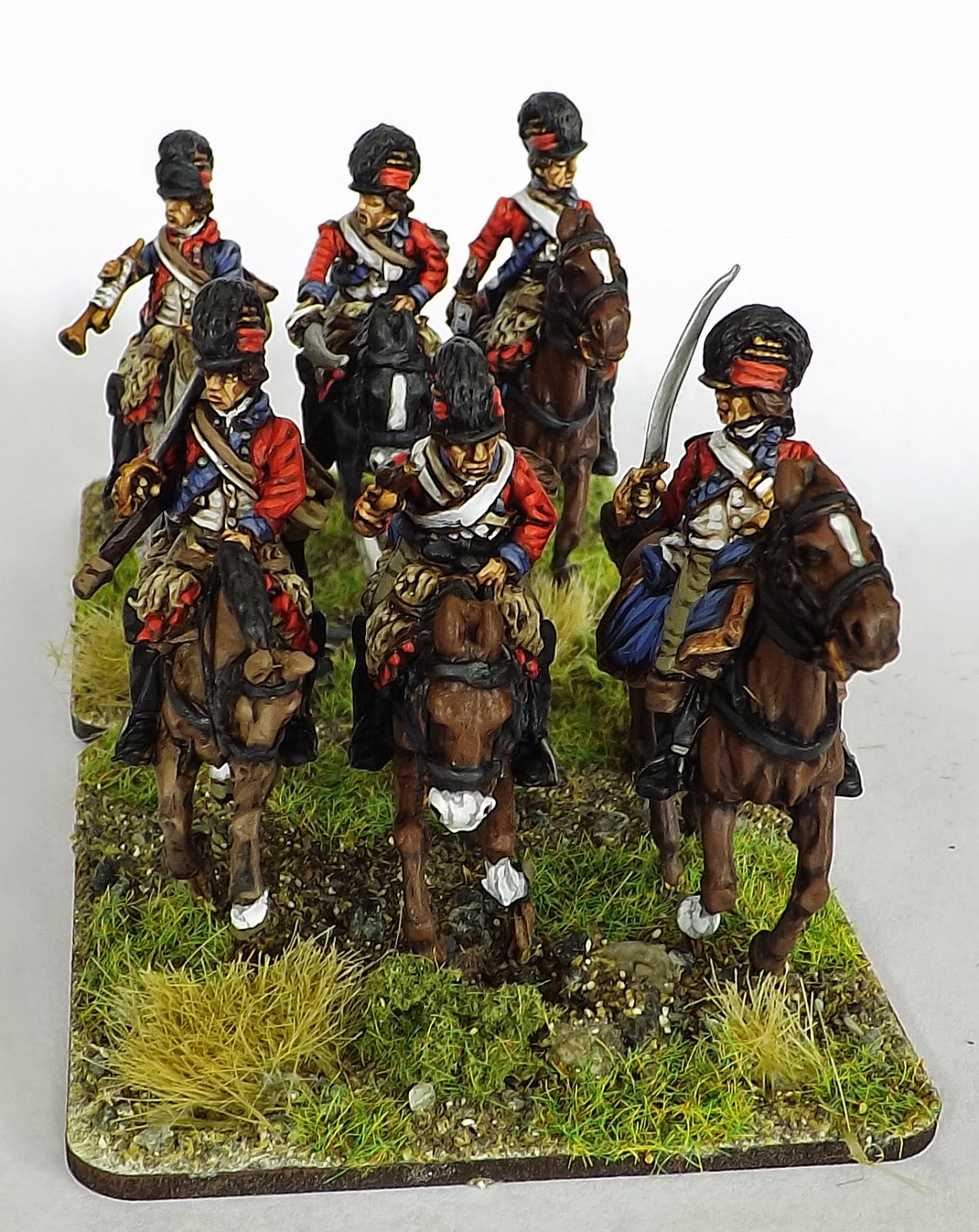 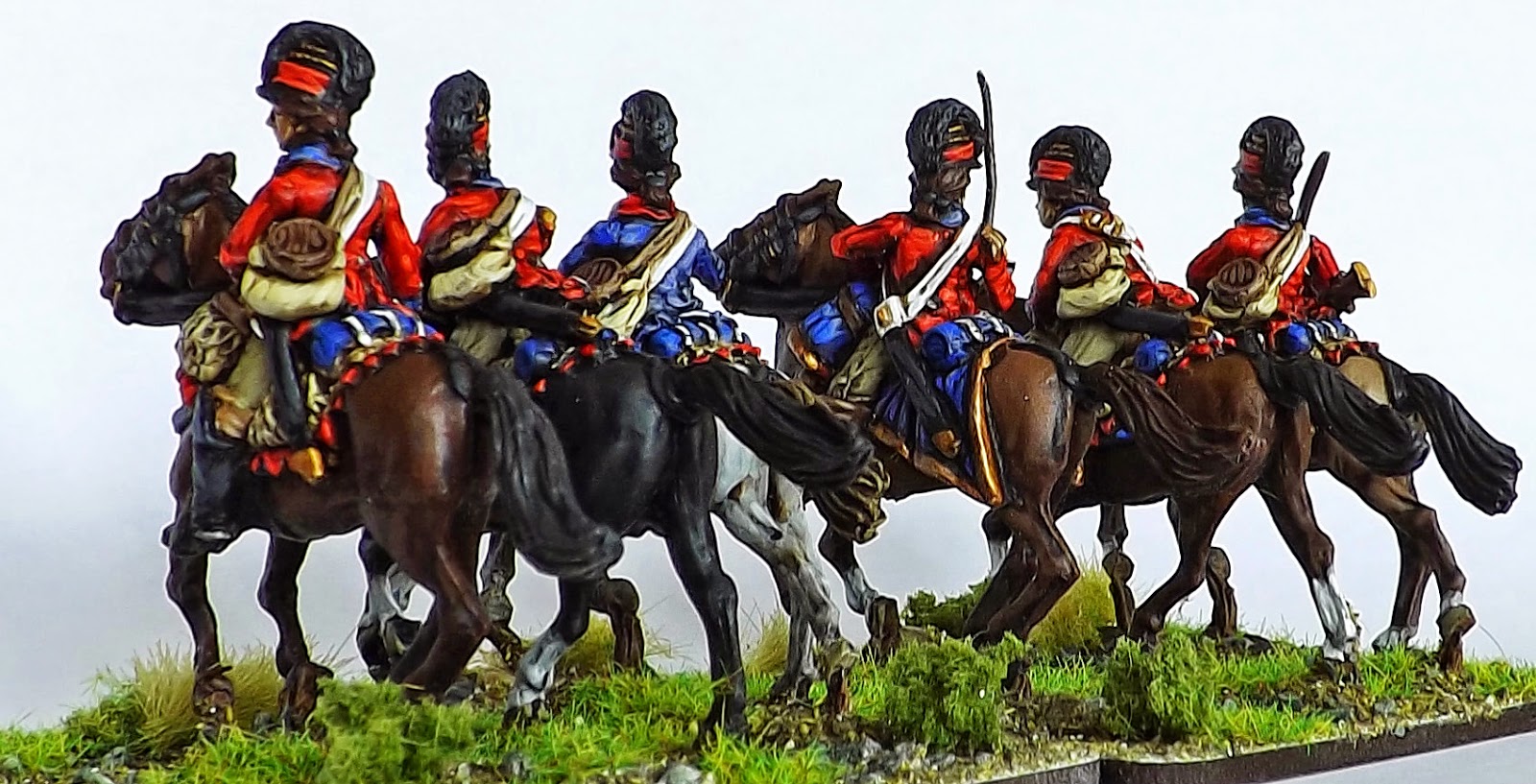 Bases are MDF ones from Warbases, pre-cut with rounded corners. infantry on 60mm x 50mm, cavalry on 60mm x 60mm. The bases are finished with my usual dry mix of grave + grit/sand/powdered filler, then torn up scenic matting, clump foliage and static grass.

I look forward to September and hopefully seeing these new troops gracing the demo game?

Yes, Darrell, the plan for September is Hobkirk's Hill featuring most of the stuff I have painted in the last few months.

I do like hand-painted flags, Rodger, but every time I start one I do ask myself "why?"! They look good when finished but fairly rubbish in all the intermediate stages :-)

"Yes, Darrell, the plan for September is Hobkirk's Hill featuring most of the stuff I have painted in the last few months."

Very much looking forward to it and I will hopefully remember both camera *and* tripod!! :>)

Stunning paint job with this unit!

Fantastic work Steve. The Loyalists you have been working on of late are coming along very nicely.

Mr. Jones, my apologies for contacting you this way, but I didn't know of any other way. There is a picture on page 7 of Rebellion that shows a beutifully painted Loyalist unit with a very unusual flag. Could you tell us more about this unit/flag? Love the book b.t.w.!

Hi Jon. They were my first attempt at the Volunteers of Ireland, based on a picture of a piece of linen auctioned in 1976 depicting a unit serving in Ireland shortly after the war. I like to think that this was the Vols after being taken onto the regular Irish Establishment as the 105th Foot. Although I have redone the unit with the "Brandenburg" uniform, these chaps still march on.
Cheers
Steve

Thanks Steve. As I said absolutely beautiful! If I could trouble,you a little further. Any way you can post a pic of the flag? You know there is a dearth of information on AWI flags, and Loyalist flags in particular. Ever considered putting some flags on the market? Yours are truly beautiful. I have been toying with gaming the American Revolution for years. Your book has inspired me to get started. Thank you - I think. :)