August 06, 2012
Hello all. I'm half way through my holiday and have survived the seaside. Over the weekend I have finished off the dipping, varnishing and first stage of basing/rebasing for my numidians as part of the Caesar vs Pompey project. As with the Romans, the final stages of basing will have to wait for a suitable weekend free of distractions but in the meantime I thought I'd pop up some quick photos of the army as it stands.

1. Warriors. A sort of heavy skirmisher troop type rather than the more familiar light infantry or auxilia. These will take a bit of tweaking to get right under whichever rule system(s) I use. The Romans seems to have bee frustrated running after them in the desert. 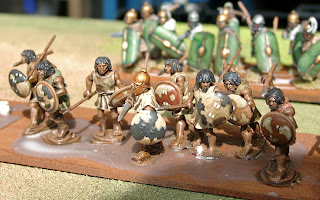 2. Elephants. The photo is of my "African" elephant. The army also has an indian one. These are converted from Foundry models. The African elephant is from the Carthaginian range and the indian one from the colonial range. The howdahs are scratchbuilt from matchsticks and greenstuff, crewed by numidian javelinmen sans shields. The elephants and crews were painted about 10 years ago unlike the freshly finished warriors. 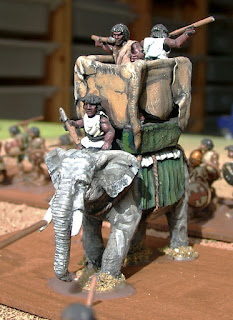 3. Light Horse. Well, it wouldn't be a numidian army without them, would it?

4. Imitation Legionnaries. To add a little backbomne to the army, or possibly to stand around looking stupid while the lighter troops make a run for it. These are unarmoured legionnary models from the Caesarian range given a suitably "numidian" paintjob. As with the elelphants these were painted a long time ago and have languished in the garage ever since, awaiting their day of glory.

5. The Army. In full battle array, including a line of skirmishing javelinmen thrown forward. There is plenty of stuff here to take on the Romans, or to provide allies for one side or the other in the Roman civil war. 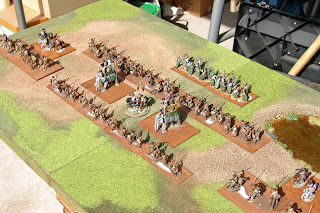 6. The Prince. Maybe even Juba himself. More old paintjobs but I have repainted the shields over the weekend to match the warriors/skirmishers/light horse. The prince is a conversion featuring a numidian light horseman below the waist and a caesarian centurion above. His shiled is from the original Carthaginian version of the converted African elephant. The standard is from some plastic set from Games Workshop, possibly skeletons? 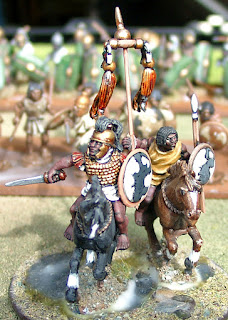 So there you have it. Apart from some flocking, static grass and general titivating I now have a fully functioning Numidian Army and have taken another chunk out of the lead pile.

In the last couple of months I have actually painted almost every Caesarian and Numidian figure that I bought when the range first came out. This really is all down to switching to Army Painter Quick Shade. The effect is very different from my usual layered painting but not necessarily worse and it certainly has helped to get the figures into a playable state.

As my overall plan at the moment is to reduce the size of the unpainted lead pile - as much to free up space as to save money - the next project is probably going to feature those lovely Perry ECW figures. The current thought is to do these all as royalists rather than bits of two armies, then add a Parlaimentarian army either with more Perry, or possibly Warlord plastics.

Partizan is just around the corner by the way, I'll be going with a shopping list to help fill out my various projects and will also be buying a load of new paints. I'll also be helping with the massive Y Gododdin game using Hail Caesar which will feature in the 300th issue of Wargames Illustrated. It should be difficult to miss this game!
Army Painter Caesarian Dux Bellorum Numidians painting Partizan