November 11, 2011
Here is the set-up for fighting the battle that has been generated by the campaign. 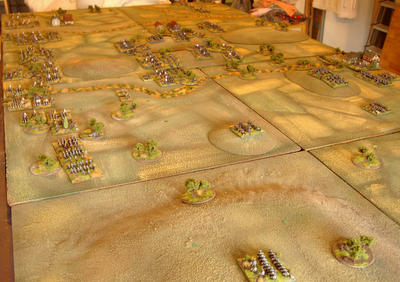 The second picture shows more clearly where each formation is deployed. The French (blue) are to the north and the Austrians (yellow) to the south. 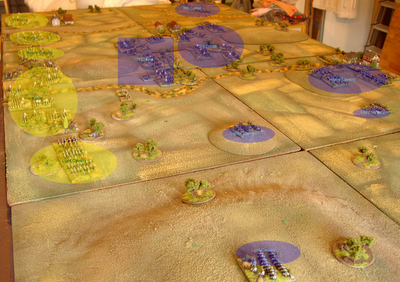 On the eastern flank there is a balance between the light cavalry of each army, but the french heavies are lying in wait so the Austrians will probably not push their luck too far. Their lights are of good quality however and they may form a useful link should IV Korps arrive before the end of the battle.

In the Centre the french have 7th (Bavarian) Corps and 3rd Corps. These are deployed on the wooded hills and it is unlikely that Austrian III Korps will be able to drive them off. The most likely scenario is that each side will hold the other in the centre.

This makes the western flank the one more likely to generate a result. Over here the Austrians have V and VI Korps, totalling some 30,000 infantry with supporting cavalry and artillery. The French right consists of the 8th (Wurttemberg) Corps, a mere 10,000 strong. (In the photos I have Saxons standing-in as Wurttembergers). Each side will have to consider carefully how to proceed her. The situation is complicated by this flank including the french line of supply/communication and this also being the likely point of arrival for 2nd and 4th corps, should they arrive.

Lots to think about when drafting orders. I don't use written order when playing most games, but as this is part of a campaign and played solo, these might add an extra dimension.