Here are the latest additions to the Waterloo project, at long last.

First is Pack's brigade, containing some fine highlanders of the Black Watch, supported by the Royal Scots.

Here is a closer shot, showing my attempts to paint tartan on the kilts.

Second base is one of Hanoverian Landwehr. The flags are somewhat conjectural and/or simplified. The figures are british in stovepipe for the rank-and-file, with british in belgic shako for the officer and standard bearer

here is a shot of the massed ranks from the rear: 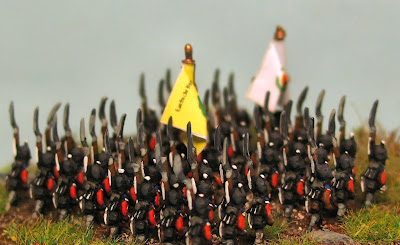 The British have been strengthened by adding the Scots Greys. I have attempted to capture the essence of Lady Butler's painting, so they are not as closely ranked as I normally base cavalry. They should stand out on the battlefield.

Here is the player's eye view (i.e.the rear of the unit)

I have also finished off the Dutch Belgian Heavy Cavalry Division with the additon of the Dutch Carabiniers (using SYW Prussian figures):

and from the side to show some extra detail: 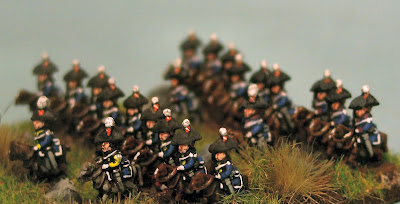 Lastly, the Brunswick cavalry brigade - hussars and uhlans. The former are british hussar figures in shako and the latter are austrian uhlan figures:

Incredible level of detail.
Respect and I hold your ability in awe!

What rule system are you basing these to and dare I ask regarding your army list and base cost in lead?

Brilliant work, as always. Keep it up!

There is a link to the rules and a supporting Yahoogroup in the top right corner of the blog.

The basing will also work with Polemos etc, but I do use some bases of mixed infantry and cavalry and slightly different artillery basing.

The rules are free yto download and should explain it all.

I have never dared to count up the cost in lead, but it must be cheaper than 28mm! :-)

I never would have dreamed 6 mil stuff would have looked so good on the tabletop until i saw your blog mate.

Steve,
Yet again, I doff my cap to you, sir.

How do you get the red to be so...er...red? Bright and vivid? I'm painting a sample pack from Baccus and mine just look really dark and dull.

Base coat of GW dark flesh then picked out with Vallejo scarlet.

I'm currently in the middle of a "step-by-step" guide to painting napoleonic british troops for Peter at Baccus to go on his website. I'll hopefully have all the painting and photography done by the weekend!

How do you do it these minatures are amazing, I've never had the nerve to Tackle 6mm but they just look great. I just love Napoleonic minatures. I've only just started my blog a week ago maybe you'rd like to pop over and see what you think.
Cheers Kent
http://kentspainting15mm.blogspot.com/

These just look amazing, I really do find them inspiring. I am going to wait till Baccus do the resculpt of their Austrians, and do them for Polemos. Hopefully I can get some way to getting a similar result.

very impressive, when people ask me why I am doing 6mm,I point them to your site, so they can see what is possible. I aim to reach something similar ...
http://s614.photobucket.com/albums/tt226/dougmelville/British%20napoleonic/?action=view&current=gordons3.jpg

I may get there eventually

2 questions, first how do you keep track of which unit is which without labeling? Second how do you store these miniatures?

Hi James, for complex scenarios I make laminated labels and glue them to the back of thevbase. There are blog posts showing this.
Storage is in plastic boxes from Ikea designed to slide in and out of wooden frames.