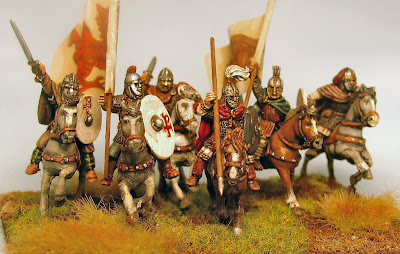 I have kindly been allowed to see a draft of Dan Mersey's upcoming dark age rules that Osprey will be publishing. I am very impressed with what I have read and am looking forward to trying them out as soon as I have a couple of other projects put to bed.

Overall impression is a game in the same spirit as Impetus, but with a nicely thought out set of mechanisms to reflect the difficulties and character of warfare in post-roman Britain. As I had planned to re-work my armies for Impetus anyway, this should dovetail nicely and still allow those diorama bases. Measurements are in base widths which helps! I think I'll go for the Impetus standard of 120mm bases as these allow about 12 infantry or 4-5 cavalry.

Great looking figures there. Interested in what you think of the various rules as I get back into figure gaming.

Sounds interesting Steve, I shall look out for them; Osprey seem to be moving increasingly into rules publication with FOF etc...

Very nice Arthurina command unit, would be nice with some more pictures.

Lucky you tht have got a glimps of the upcoming Osprey rulset, as Dan is the authour I expect them to be based on he´s "Glutter of Ravens"

GoR are quite nice, my only concern was that it was to hard to keep track of the 3 different adjusable combat values for each unit.

I realy hope that this are fixed in some way, as the rest of the gaming mechanism and era flavuor was realy greate.

You might get us some insight in that question...

Very nice stand, I will be doing a couple of Impetus armies, I love the diorama style stands, well done.